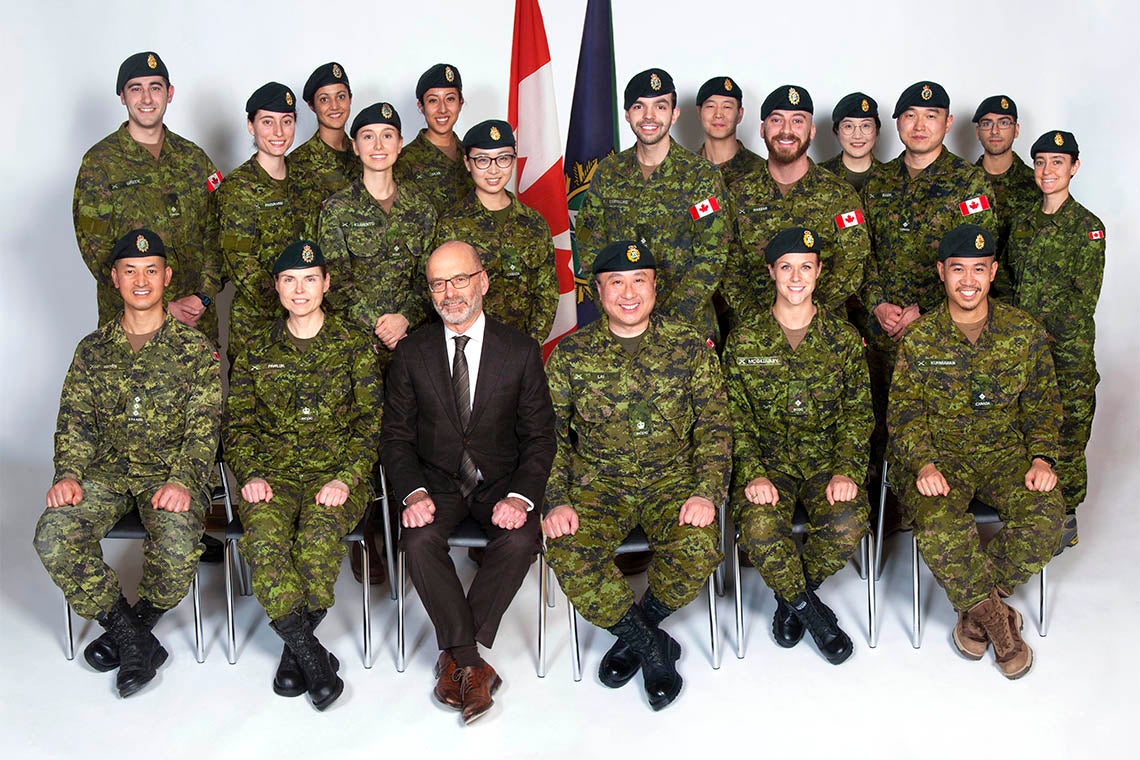 The full military cohort at U of T's Faculty of Dentistry, with Dean Daniel Haas (centre-left, bottom row), beside Vice-Dean of Education Jim Yuan Lai (centre-right, bottom row), who is also a reservist and major (photo by Jeff Comber)

When she was ten years old, Ming Hao (Mary) Li moved to Edmonton, Alta, from one of China’s northernmost – and poorest – provinces. For a while, Li and her parents lived in a basement apartment in the home of her mother’s former English teacher, who helped the small family with their transition as immigrants.

They didn’t speak English well. They didn’t know Canada at all. But, having heard from a family friend that it would be a good experience, Li’s mother dragged the young Li to the Royal Canadian Air Cadets.

Cadets gave the young newcomer a sense of belonging. And it was that formative experience, and the mentors she found there, that led Li to roll her other passion – dentistry – into a full military career.

The two professions blend well together, with the Canadian military employing approximately 140 dentists (and many more physicians) at its 26 bases across the country. This spring, Li was one of 120 U of T dentistry students to graduate, but one of only seven to also add a military rank to their credentials: Captain in the Canadian Armed Forces – military dentists who will provide care for their military colleagues.

It’s the largest U of T Faculty of Dentistry cohort to graduate in service to the military since the World Wars. Including the recent graduates, there were a total of 18 enlisted service people at the faculty this year, including two majors.

While rising world tensions may have contributed to the large cohort, it doesn’t tell the whole story. The Canadian Armed Forces offer dental students a major advantage. Often joining the military during the first or second year of their dental degree, enlisted students concentrate on their studies throughout the school year. During the summer break, though, students are assigned to bases across Canada, where they are mentored by licensed dentists, earning valuable on-the-job training.

Like her fellow second lieutenants (the students’ rank prior to graduation) Taya McGillivary excelled under the army structure. For three years she played in the Canadian women’s military soccer program, making it to the semi-finals for Ontario last year.

But the Port Williams, N.S., native chose military dentistry for its unique learning opportunities. With the financing of her degree taken care of, she could focus on her studies. And she loved the on-the-job training she received at military clinics.

“Being able to spend summers doing dentistry was really appealing to me,” says McGillivary.

She worked at the Denison Armoury in Toronto and CFB Edmonton during her summer breaks. There, “with an oral surgeon six inches away from me,” she extracted over 100 impacted wisdom teeth and performed gingival grafts with a periodontist.

Thanks to the abundance of clinical experiences, McGillivary got better – and faster. She finished all of her clinical credits in early November, well ahead of convocation. And thanks to a “lightbulb moment” working for a mentor in the CFB Edmonton clinic, she’s decided to pursue a specialization in oral surgery.

It’s a sentiment that echoes true for Li. While the military might not pay as much as private practice, it offers budding dentists the chance to practise without the usual worries of finances, competition or large student loans. “I have the opportunity to practise ‘ideal dentistry’ when starting out. I just want to be good at what I do. I just want to do dentistry,” says Li.

For Marshell Kurniawan, who enlisted during his second year of dental school, the army offers a way to give back to the country that embraced him as a child. He and his family emigrated from Indonesia to Brampton when he was seven years old. Like Li, Kurniawan and his family learned the language once they arrived. He learned the importance of communication, so vital to patient care, and how to adapt to different environments – a skill necessary in military life.

Once he gets to his post-graduation posting in Petawawa, Ont., Kurniawan will work alongside three to four senior dentists as well as classmate Hwabin Lee. He likes the group identity, the feeling that everyone in his platoon is accountable to one another.

“There’s built-in mentorship in the army,” which is so important to fledgling dentists, says Kurniawan. If you need help with a third molar extraction, for instance, “there’s usually an oral surgeon on base. You either shadow them or assist them.”

Li agrees. “Especially in your first year after graduation, you won’t be comfortable doing certain procedures without supervision. But because the supervision is there, it opens up more doors to collaborate with the specialists and GPs on base.”

Typically, a military dentist will give Canada four years of service post-graduation. Some, like McGillivary, will leave early to follow specializations. But some, like Kurniawan, will build entire military careers.

“I really want to stay in the army,” says Kurniawan. “Hopefully I’ll be there for the long run, though I might like to work in a private clinic on weekends.”