U of T experts work with U.S. startup to turn trains into giant carbon-capturing machines 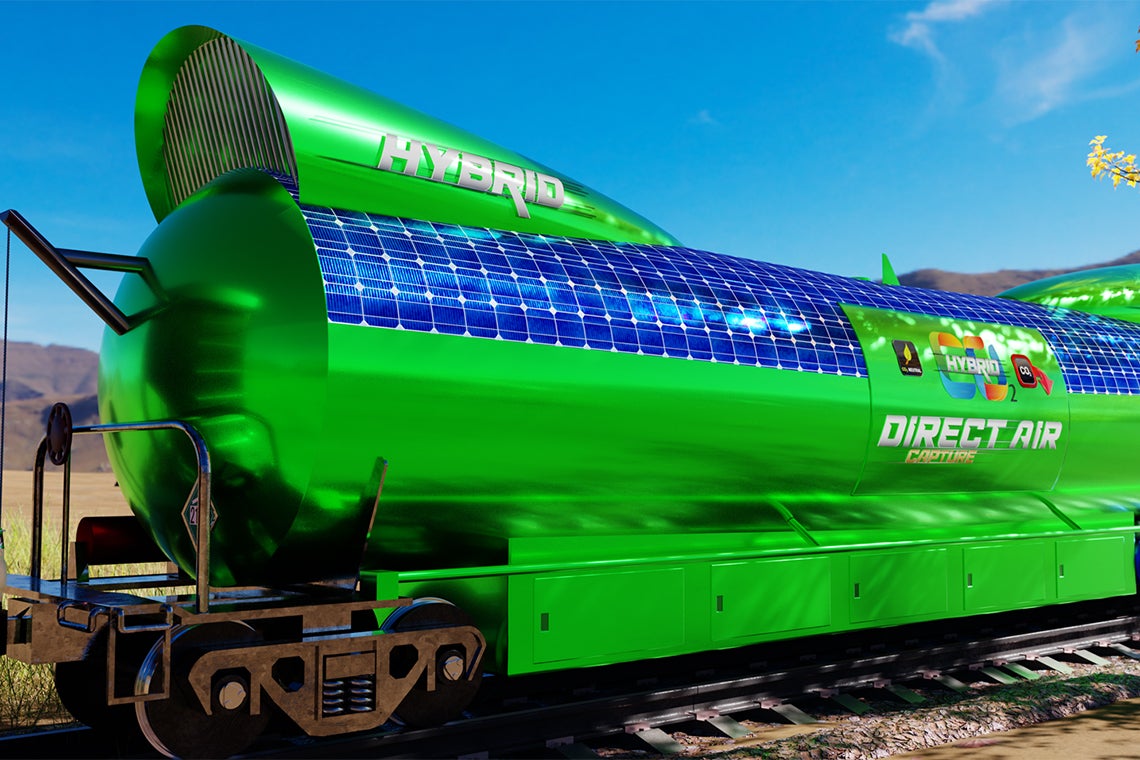 CO2Rail is partnering with U of T researchers to explore the feasibility of adding direct air, carbon capture technology to freight and passenger trains (rendering courtesy of C02Rail)

What if rail systems around the world could be harnessed to help mitigate climate change and clean our air of carbon dioxide? It’s a question the founders of a U.S.-based startup, CO2Rail, have been pondering for a number of years.

Now, CO2Rail is partnering with University of Toronto researchers to explore the feasibility of adding direct air, carbon capture technology to freight and passenger trains.

Direct air capture (DAC) is a technology that removes carbon dioxide from the air with special machines and compresses it for other uses or permanent storage. The process, however, can be energy and land intensive and often very expensive.

That's why a team of researchers from Canada, the U.S., England and Germany aim to design DAC technology that uses less energy and less land at a viable cost. The multi-disciplinary team includes University Professor Geoffrey Ozin, in the department of chemistry in the Faculty of Arts & Science; Alán Aspuru-Guzik, a professor in the departments of chemistry and computer science; and Jeffrey MacIntosh, a professor in the Faculty of Law. (Ozin and Aspuru-Guzik also hold appointments to U of T’s Acceleration Consortium, which brings academia, government and industry together to tackle AI-driven materials discovery.)

In the journal Joule, the researchers recently shared their plan to place DAC equipment within special rail cars on existing trains to take advantage of the global rail network. They were able to demonstrate that rail-based direct air carbon capture could be a near carbon-neutral system capable of harvesting 2.9 gigatonnes of C02 by 2050.

A rendering of a C02Rail car shows the C02-heavy air going in, the C02 being separated and collected and C02-free air being discharged from the rear (rendering courtesy of C02Rail)

DAC rail cars work by using large intakes that extend up into the slipstream of the moving train to move ambient air into the large CO2 collection chamber and eliminate the need for energy-intensive fan systems that stationary DAC operations require. The air then moves through a chemical process that separates the carbon dioxide from the air, and the CO2-free air then travels out of the back of the car and returns to the atmosphere.

After enough has been captured, the chamber is closed and the harvested CO2 is collected, concentrated and stored in a liquid reservoir, either to be used as feedstock or to be delivered to nearby geological sequestration sites.

Each of these processes is powered by on-board generated, sustainable energy sources that require no external energy input or off-duty charging cycles.

When a train pumps the brakes, its energy braking system converts the entire train’s forward momentum into electrical energy. Currently, this energy is dissipated in the form of heat and discharged out of the top of the locomotive whenever it brakes.

Eric Bachman of CO2Rail say that energy could be captured, stored and put to use. “For many decades, this enormous amount of sustainable energy has been completely wasted,” he says. “On average, each complete braking maneuver generates enough energy to power 20 average homes for an entire day, so it is not a trivial amount of energy.”

It can also be tricky to obtain permits to build largescale operations in or near a community.

“It’s a huge problem because most everybody wants to fix the climate crisis, but few are happy to have it done in their proverbial ‘backyard’,” says Ozin, a recipient of the Albert Einstein Medal for outstanding scientific work related to the German-born physicist.

“Rail DAC does not require special zoning, surveys or building permits and would be transient and generally unseen by the public,” he adds.

Ozin has spent the better part of the last two decades researching how to harness sunlight to turn CO2 into a chemical feedstock for a wide range of commodity products and fuels, a process known as carbon capture and utilization.

He believes that rail-based direct air capture becomes an even more attractive climate solution because much of the required infrastructure is already in place and ready to be used.

The potential impact of this technology could be even greater if rail grows in popularity as a more sustainable alternative to airplanes. Earlier this month, European transport organizations said they are committed to tripling high-speed rail use by 2050 to curb C02-heavy air travel.

The team says that, in the near term, each direct air capture car will harvest over 6,000 metric tonnes of carbon dioxide from the air per year – and much more as the technology develops. In Joule, the authors were also able to demonstrate how this technology could scale down to less than $50 USD per tonne.

The next step for CO2Rail is to complete the first prototype and to test it in real-world environments. Ozin believes the first direct air carbon capture railcar will be in production by early next year.