U of T experts on why Fort McMurray is burning 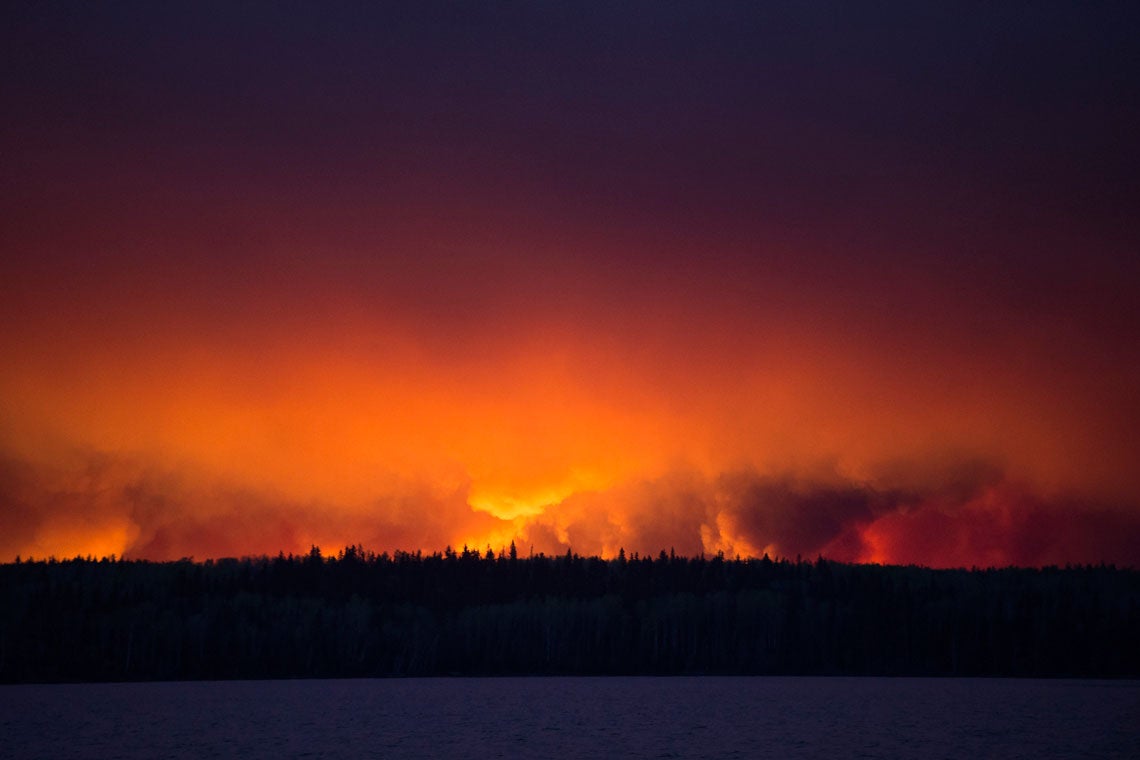 “Yes, we can expect more such fires in the future due to climate change”

The raging wildfire that has forced the evacuation of Fort McMurray and engulfed parts of the community has already burned through 100,000 hectares. Many parts of the city continue to be in danger.

The Fire Management Systems Lab at the University of Toronto has been involved in forest fire management research for more than 30 years. A decade ago the University expanded its partnership in forest fire research with the Canadian Forest Service to add expertise in the area of physical fire science to the lab. Based at the Faculty of Forestry, research at the Firelab focuses on improving the understanding of fire in boreal forest ecosystems and developing information and  decision support tools for forest fire managers.

They spoke with U of T News writer Larysa Woloszansky about the science of wildfires.

Martell: We are witnessing a great deal of media coverage of this fire because of its enormous impact on the residents of Fort McMurray and the surrounding communities – the massive evacuations in the face of the advancing fire, the loss of homes and the massive disruption of the lives of the people involved.

However, high intensity fires that grow to this size and larger occur in the forested regions of Canada every year. Forest fires burn about 2.5 million hectares of forest in Canada each year and the area burned during the last two years was well above average.

Fortunately, those fires do not always affect the communities that are dispersed throughout the vast forested areas of Canada. But when they threaten public safety and communities, they generate the kind of media attention we witnessed recently.

What produced this fire and why it has been so difficult to control?

Wotton: Forest fire behavior is influenced by vegetation (which fire managers refer to as fuel), current and past weather and topography.

There are several factors at play that have made this fire so intense and difficult to control. It occurred right after snow melt and the annual vegetation has not had sufficient time to even begin to‎ green up – for the new lush moist vegetation to emerge and help inhibit its spread.

A large dry and quite warm air mass with relative humidities in the mid-teens has been dominating weather patterns in the area. Those very low relative humidities have made the surface fuels (e.g., dead grass and pine needles on the forest floor) extremely dry.

The winds associated with that air mass have been consistently very strong and gusty. Dry fuels ignite and burn vigorously and high winds cause fires to spread very fast.

Fast-moving fires typically generate high intensities and those high intensities produce the large flame fronts above the tops of the trees that we’ve seen in the photographs and videos coming out of the Fort McMurray area.

What will it take to bring the fire under control?

Wotton: A change in weather is needed: an extended period of higher humidities and lower wind speeds and some rain. The intensity of the fire needs to decrease before fire fighters can safely construct control line around its perimeter. As long as the relative humidity remains low, the unburned fuel will stay extremely dry and flammable and embers (e.g., burning bark and small branches) lifted by the convective action of the fire and then carried ahead of the fire by the wind, will ignite new spot or jump fires across existing control lines and render control action ineffective.

(Photo of Fort McMurray below taken by Chris Schwarz, Government of Alberta on May 4/ see more photos at Premier of Alberta via flickr) 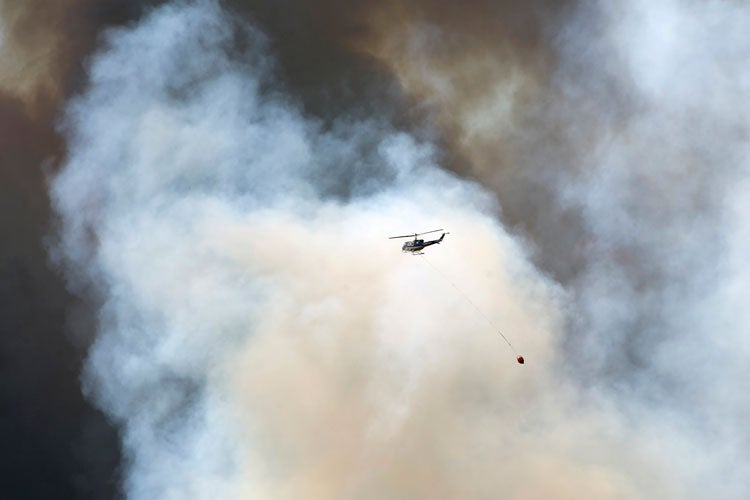 The faster a fire spreads and the more intense it becomes, the more difficult it is to establish and maintain control lines.  Airtankers can drop water and fire retardants where it is unsafe for firefighters to work on the ground but eventually spotting renders even large airtankers ineffective.

When faced with intense fast-moving fires, firefighters have to step back, watch nature take its course, and wait for the weather to change. They then move in quickly to exploit natural barriers such as lakes and rivers and construct control line when and where it is safe to do so.

Could fires such as these become the “new normal”?

Wotton: The research that has been carried out over the past couple of decades indicates that with climate change, forest fuels will get drier. Projected increases in rainfall that Global Climate Models predict will occur in some areas but will not be sufficient to offset the increased drying of forest fuels due to the warmer temperatures.

Drier fuels will mean more fire ignitions, and more ignitions will pose greater challenges to fire management agencies.  Put simply, yes – we can expect more such fires in the future due to climate change. 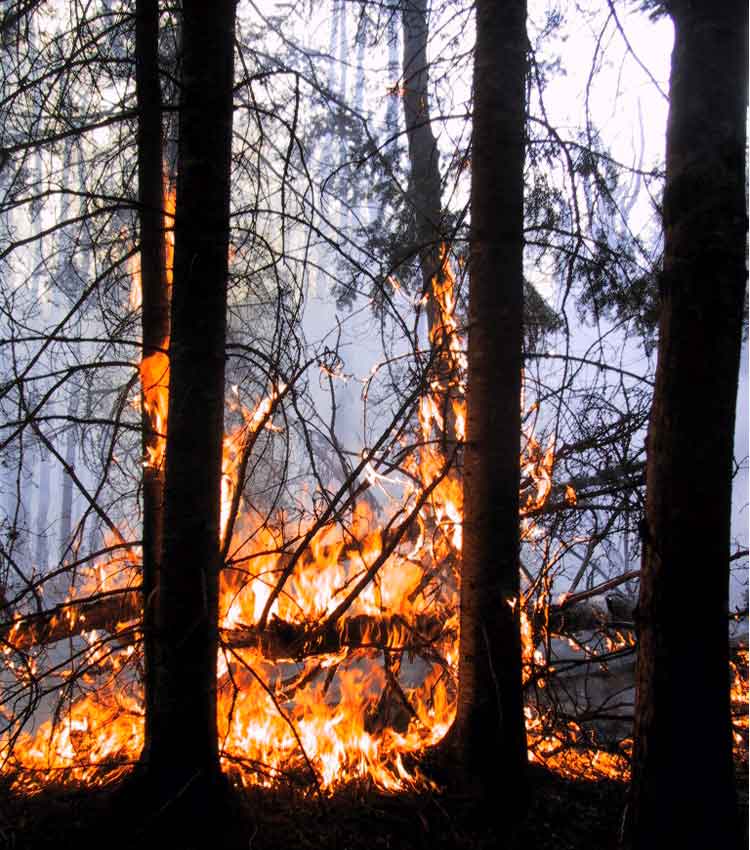 Can we prevent this from happening again?

Martell: We can reduce the likelihood of such events occurring but we cannot always prevent them from happening. As long as we have communities in forested areas some risk will remain. There are risk mitigation measures such as implementing fuel management programs (i.e., reducing flammable fuel accumulations) in and surrounding communities, enhancing fire prevention programs and investing in good fire detection and initial attack systems that are designed to contain fires while they are still small.

Fire is a natural ecosystem process that is essential to the health of Canada’s forest ecosystems. Fire destroys trees but it does not destroy forests.  However, fire clearly does and always will pose a very significant threat to public safety and homes and other property and resources we value.

Canadian forest fire management agencies have, for several decades, been gradually moving away from their traditional fire exclusion policies that were based on the assumption that all fire is bad and that it was to be excluded from the forest at almost any cost – and towards the development and implementation of enlightened fire management policies. These call for achieving an appropriate balance between reducing the detrimental impact of fire on people, property and resources and letting fire play a more natural role when and where it is appropriate for it to do so.

Canadians should encourage their forest and wildland fire management agencies to continue to gradually embrace such change and help them deal with both the challenges and opportunities such change will bring.