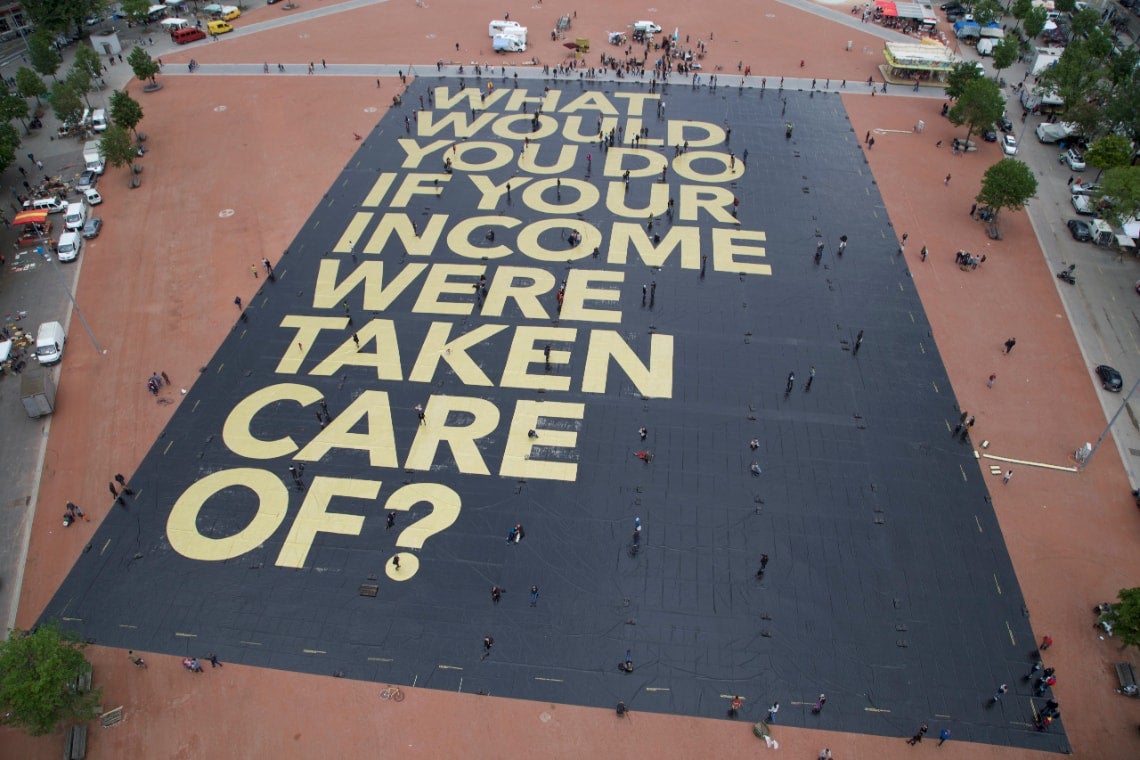 Activists for a universal basic income install a giant poster in a public square in Geneva, Switzerland, in May 2016. The Swiss referendum failed in June (photo by Generation Grundeinkommen/Flickr)

Many eyes are on Finland this week as it becomes the first European country to give unemployed citizens a monthly sum, testing the idea of a universal basic income.

It’s a notion that has been gaining traction around the world as workers lose jobs to automation and globalization. Ontario is set to become the first North American jurisdiction in decades to try out a universal income (a plan for the pilot project is expected in April). And the Netherlands and Kenya are also planning trial runs.

Under the Finnish program, which started this week, 2,000 people will receive €560 ($780) per month – no strings attached – to replace their current social benefits. They would keep that income even after they find work.

Advocates say a basic income provides stability in a world of precarious employment. But critics argue that the policy will create a nation of slackers.

What exactly can Canada learn from the Finnish experiment? U of T News spoke with Anu Muhonen, assistant professor and director of U of T’s Finnish Studies program, and Hugh Segal, the master of U of T’s Massey College, a former senator and the special adviser to Ontario on basic income. 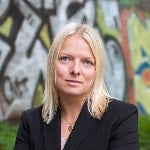 You just got back from Finland yesterday. Can you tell me how the idea of a universal basic income is being received there?

In general, it’s been perceived positively. The idea is that it would encourage people to find full-time or even part-time jobs instead of living under social welfare. It would be income that you keep even if you get a job. People are enthusiastic to see how it goes. That’s what I’ve been seeing in the newspapers like Finland’s main newspaper, Helsingin Sanomat. It’s been discussed a lot.

Why is Finland trying this now?

It’s been on the agenda of many political parties. And I think nowadays the atmosphere in Finland is that it’s not worth getting a job because you can live under unemployment and social welfare benefits.

I think people have said that these benefits are so good that it discourages people from finding work. I think this gives everybody hope to get into the labour force.

What do people hope to gain from the new program?

One of the positive outcomes people are looking forward to with basic income is that it may reduce the bureaucracy since one doesn’t need to apply for basic income. It’s still very early to say anything, but the hopes are high.

There are several countries that are toying with the idea of a universal basic income. Why do you think this idea is becoming more popular now?

We understand from the statistics that the existing social welfare programs aren't working.

The number of people living in poverty hasn't radically changed. The second issue is that because of the costs that are caused by poverty in education, health care and policing, we need to find ways to reduce those demands by investing properly in advance.

The other, larger issue is if you stand back and look at Brexit, the growth of populist political movements, there is clearly a strong sense that however the superstructure of compassionate capitalism is supposed to work, it's not reducing the gaps.

A lot of people are feeling very left out – or worse, that they're managing but their kids prospects are not good.

What are some differences between Finland’s experiment and Ontario’s?

One of the things I proposed in our discussion paper is that we not do precisely what Finland is doing for two reasons: a) the Finns are doing it and they're going to share their data with everybody, and b) they're doing an amount where everybody in the pilot project gets the same amount of money.

That's more in the context of a universal grant where everybody gets money and the tax system gets it back from the people who are already well off. What we're recommending here is a top up so that people who live beneath the provincial poverty line (the Low Income Measure) they would be automatically topped up to a maximum of $1,300 a month. The present amount for a single mother on Ontario Works is about $600 a month.

Although the Finnish experiment is different from Ontario's, what can we learn from it?

If you look at Hamilton or Toronto, it's much more heterogeneous than Finland in terms of cultures and backgrounds. So there's some of what will emerge from Finland which will be of great value, but it's important to do our own project because we have to reflect the diversity of our own community.

What about criticism that a basic income will encourage freeloaders?

My friends on the far right might say that if you pay people not to work, why would they work. My answer is please understand that over 50 per cent of people beneath the poverty line in Canada have a job. Some have more than one. Depending on the city in which they live, what they earn isn't sufficient to get them over the poverty line.