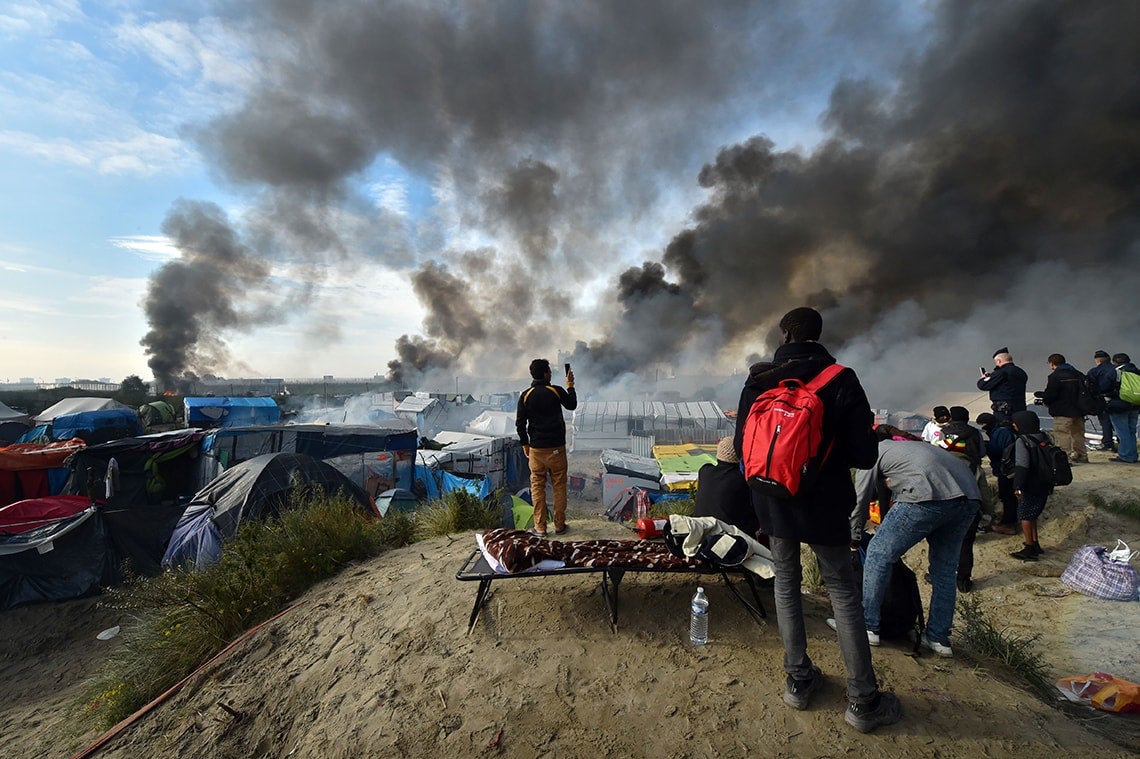 Nearly 9,000 refugees and migrants have been evicted by French authorities from the ad-hoc refugee camp

Uncertainty hangs over the fate of thousands of refugees as France dismantles the Calais refugee camp. Known as the “Jungle,” the sprawling shantytown has been the temporary home of an estimated 9,000 refugees and economic migrants, many of whom are seeking entry into Britain.

On Wednesday, as several fires broke out in the camp, France declared the site was now completely cleared of migrants. The French interior minister has said that all those with proven family links in Britain would eventually be transferred to that country.

Randall Hansen is a professor of political science in the Faculty of Arts & Science and director of the Centre for European, Russian, and Eurasian Studies at the Munk School of Global Affairs. Phil Triadafilopoulos is an associate professor of political science at U of T Scarborough and U of T's School of Public Policy & Governance.  They spoke with U of T News about the fate of the refugees who have now been transferred to other centres in France and whether this opens the door for other European countries to dismantle camps of their own.

Why is France dismantling the camp? Will conditions improve for the refugees?

RH:  The camp is really an ad-hoc settlement, a squat or shantytown that followed the 2002 closure of a reception warehouse for asylum seekers at Sangatte. The conditions in the ‘camp’ were appalling – inadequate housing, heat, sanitation – and there was great opposition from the local community. Conditions will improve: the asylum seekers are being distributed across the country and will be housed in proper reception facilities. Some 200 unaccompanied children will also join relatives in the UK.

PT: France is dismantling the camps in Calais to demonstrate that the French state has control over its borders and territory.  The timing is based on the upcoming presidential election in 2017.  Right-wing candidates have and will continue to make sovereignty and control of borders top issues. The current government is making an effort to demonstrate its ability to respond forcefully to migration-related concerns. The plan to disperse asylum seekers, including many unaccompanied children, to camps in other parts of the country will run into a simple problem: asylum seekers have their own objectives, principally to make it to Britain in order to claim asylum there, which they will act on despite the intentions of the French state.  We are likely to see new unplanned camps emerge in other border areas.

How will this affect refugees’ ability to get to the UK or get asylum in Europe?

RH: They have the right to go to the UK, but little chance of being admitted unless they are unaccompanied children. Under refugee law, there is a presumption of family reunification but not a definitive right. As far as the UK is concerned, it is agreeing to accept them as a humanitarian gesture rather than as a right. That was why the bottleneck occurred. Under EU law, asylum seekers are to be processed in the first EU country they reach. That may not have been France, but it was certainly not the UK. The redistribution itself will not affect their ability to secure asylum. The French government will process their claims and decide whether or not they secure asylum.

The UK is glad to see the camp closed, as it removes the asylum seekers from the point on the continent that is closest to the UK’s borders. I have not seen the polls, but there has been a general acceptance that minors can come if the numbers are small and relatives are in the UK. The notoriously xenophobic British tabloids have done their level best to whip up hatred over the fact that a tiny number of 19-year-olds managed to slip through, but their efforts have not resulted in an overall backlash. What the British really fear is that, post-Brexit, the French government will allow asylum seekers to leave France, which would result in boatloads of asylum seekers making the way to the UK (which is appealing because of language, family and/or the relative ease of slipping into an informal existence). With an election coming, French politicians are suggesting they might [allow them to leave for Britain], but as refugees would likely drown on the way, there are serious moral constraints against so doing. My guess is that some form of Anglo-French cooperation will continue even after Britain leaves the EU.

PT: Unaccompanied children with close family ties in Britain qualify for relocation there. We don’t know how many fall into that category. British authorities have mentioned 400, but estimates vary.  The reception these children will face is uncertain. British NGOs are doing a very good job but, unsurprisingly, the tabloid press has gone out of its way to politicize the issue. What will happen to other asylum seekers seeking to enter Britain is not clear. More generally, the clearing of the camp in Calais fits into a broader trend: European states are using force to assert their sovereign right to control their borders in the face of unprecedented movements of people.

Are we going to see more countries take down their refugee camps?

RH: Such camps are very rare in northern Europe, though something approaching them can be found in Germany, which was overwhelmed with asylum applications in 2015. Where such camps do exist in Europe – notably in Greece where a great bottleneck has also developed since the Balkan route to Europe was closed – they will not be closed unless asylum seekers can be redistributed across Europe, and such a redistribution is proceeding with glacial speed. In the global south, where the majority of the world’s refugees are located, refugee camps will remain, though they only house some 33 per cent of the world’s refugees.

PT: We already have! Recall that Greece razed the Idomeni camp in the spring of 2016. And, yes, I do believe we are going to see states resort to force to dissuade unauthorized movement and settlement in the future. States want to be seen as competent managers of their borders. Unauthorized movement across and settlement within their borders challenge this claim.  When these challenges become a source of political irritation and threat, governments react. This is what happens when something as basic as the right of human beings to move across territory in search of a better life – something our species has been doing since its inception – runs headlong into the much more recent, countervailing right of sovereign states to assert unchallenged control over their borders and territories. It is an inherently violent and dangerous dynamic and it is likely to get worse.