U of T experts on life after Brexit: “This is going to resonate for a very long time” 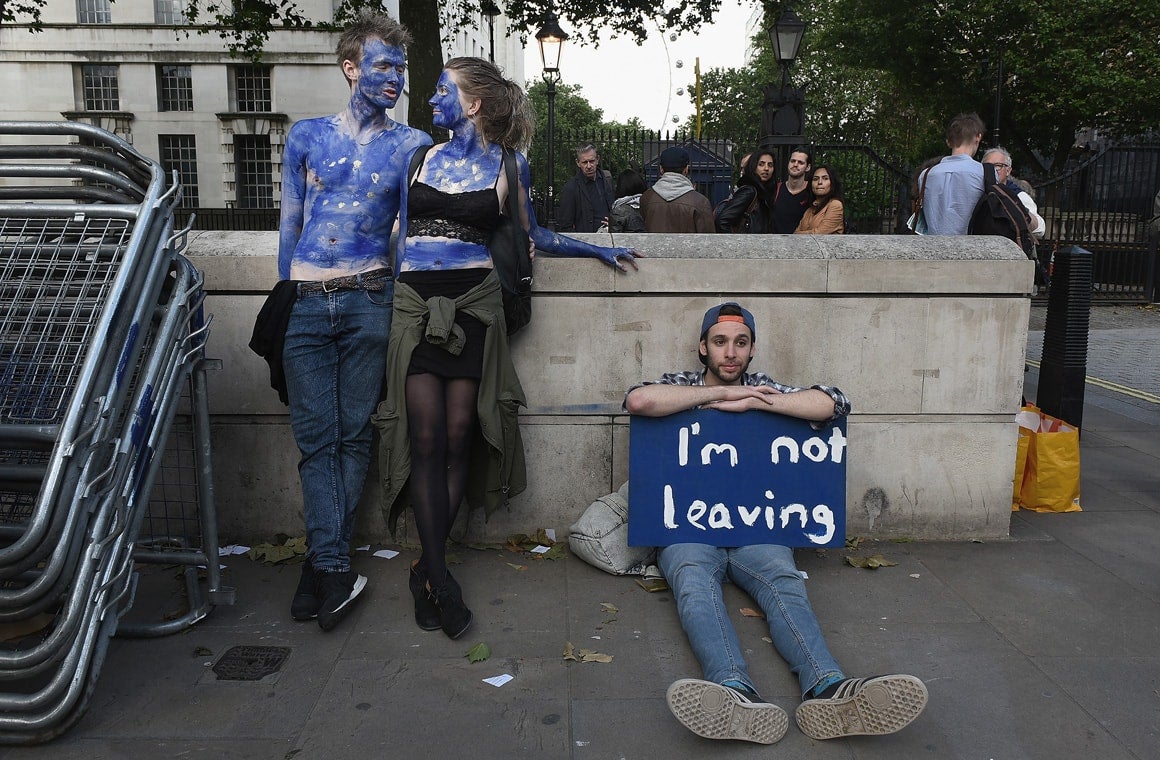 “Xenophobia is a major concern”

The Brexit referendum shocked everyone last week, from politicians and experts to the general public. U of T News covered responses from political scientists shortly after the vote was announced. Read more coverage of Brexit on U of T News.

Members of the EU are now bracing themselves for the break, and the economic and political ripple effects of Brexit will be a top issue today when North American leaders meet at the so-called Three Amigos summit.

U of T experts Carolina de Miguel Moyer and Phil Triadafilopoulos shared their thoughts on the responses to the British referendum vote and what it means for the future of Europe and North America.

Assistant Professor Carolina de Miguel Moyer is an expert on European and EU politics, electoral behaviour and political party systems. She spoke to U of T News about rising global trends and says that the national is championed over the global.

On populism and nationalism in Europe and North America

Brexit is not only a British or a European issue, it’s a broader global issue. It is important to remember that not so long ago Europe was torn apart by one of the bloodiest conflicts in history. The EU’s importance lies not only in its economic accomplishments, but in the ability to bring peace to Europe. The success of the European project should be in the interest of our global community, and Brexit undermines to some extent the legitimacy of this project.

There is also a global economic angle to Brexit, which is that it signals a trend towards nationalism and protectionism across the globe. The national is being championed over the global, not only in the UK and but also in other European countries, and in the US.

Finally, xenophobia is a major concern linked to these nationalistic and protectionist discourses, which we see on the rise in France, the Netherlands, Italy as well as many Eastern European countries (and the US). These movements in Europe are often linked to Euroskeptic views, similar to those of the leave campaign in the UK, and they seem to have gathered renewed strength after Brexit. We’ll see if there is a domino effect from Brexit when we see the result of upcoming national level elections in the continent. The rise of these parties and movements could make it especially difficult for the European Union to effectively deal with its two other most pressing crises: the Greek crisis and the migrant crisis.

On the Three Amigos summit

The issue of Brexit is certainly going to be on the summit’s agenda, and we will probably see the leaders of the summit respond to the outcome of the referendum with pro-trade liberalization discourses and an agenda to strengthen co-operation in a variety of domains. The leaders of the summit – Obama, Trudeau and Pena Nieto – recognize that we are at a moment in history where protectionist forces are on the rise, so they have an interest in consolidating what already has been accomplished with NAFTA and the TTP. I think they would like to keep the momentum going for these agreements, and prevent any future political tides from reversing them (especially coming from the US).

On the upcoming U.S. election

In the US, the presidential candidates have reacted to Brexit and Clinton has started to take the outcome very seriously since a similar nationalist and protectionist discourse is already part of Trump’s campaign. A certain sector of the working class in the US might find some affinity with this kind of discourse, and Clinton will have to find a way to address and counteract that. In the campaign for example, Hillary Clinton has shown some reservations for the recent TTP agreement, and we might see more of this protectionist talk as we move forward.

On Scotland and Ireland

Regarding Scotland, Brexit has the potential to re-ignite secessionist forces, and there are talks about a second referendum for independence. However, the conversation is also turning into an exploration of the ways in which Scotland might stay within the UK and the EU at the same time even if other parts of the UK are not in the EU. The precedent is Greenland. However, this is a complicated option for Scotland because it would require the rest of the UK (England, Wales and Northern Ireland) to agree that Scotland stay in the EU while they don't, and it would also require that all other EU countries agree to it as well. This might be doubtful in the case of countries with secessionist movements within, such as Spain.

Phil Triadafilopoulos is an associate professor of political science at U of T Scarborough and the School of Public Policy and Governance. “Anyone who says they have a clear picture of what could happen after the Brexit is lying,” Triadafilopoulos said. All of the pieces are still moving, he told U of T News, as he shared insights about the role of immigration and economic discontent in the referendum.

On the role of xenophobia in politics

In the election in Canada, although all three political parties were ultimately pro-immigration, we had some debate over who can be a citizen and who can’t. We also saw the issue of the head scarf in citizenship ceremonies become highly politicized.

The conservatives were pro-immigration, but they played the identity card and were anti-Islam, and that backfired against them. When people hear about the rights of some dual citizens being taken away, other dual citizens also get worried.

In Canada, anti-immigration, anti-Islam and xenophobic sentiments were punished in the ballot box. But in the United States they have helped the presumptive Republican nominee Donald Trump. Trump made immigration one of the central parts of his campaign platform and will likely continue to do so moving forward.

In Britain, in the last part of the campaign, the “Leave” side played up immigration concerns. Some of the surge in support for the Leave side was likely due to making immigration the central plank in its campaign. Certainly some of the rhetoric and materials in the campaign were blatantly anti-immigration.

On why populism is on the rise

The changes in the economy of Canada, the United States and Britain have been profound. People who had jobs in the manufacturing sector, and who could previously rely on their unions to deliver reasonably good benefit packages saw that economy slip away.

The hollowing out of the manufacturing sector has created a situation where politicians can exploit discontent – discontent that is justifiable.The mobilization of this discontent has given a boost to populist politicians in Britain and the United States, but it has not been as effective in Canada.

This is going to resonate for a very long time. How will Britain act on the vote and who will act on Britain’s behalf? When will they invoke article 50 to begin the process of exiting the European Union? How will they use this opportunity to negotiate new terms with the European Union? Will Scotland use this opportunity to work towards a new independence referendum? How will the EU deal with the refugee crisis and the ongoing crisis in Greece?

Europe is not in the greatest of positions to deal with these very profound challenges. The pound has taken a beating too and that’s not likely to improve quickly.  In the long run we’re not sure what the Brexit vote is going to mean. For instance, multinational companies currently based in London might decide to relocate to Dublin or Frankfurt. That would be great for Ireland and Germany, but not for Britain.

It’s possible that the EU might come out of this stronger, because Britain made it difficult to be more cohesive, and was always a thorn in the side of pro-integration forces. But it might also mark the end of serious attempts at political integration or even contribute to the longer run dissolution of the EU. We just don’t know.