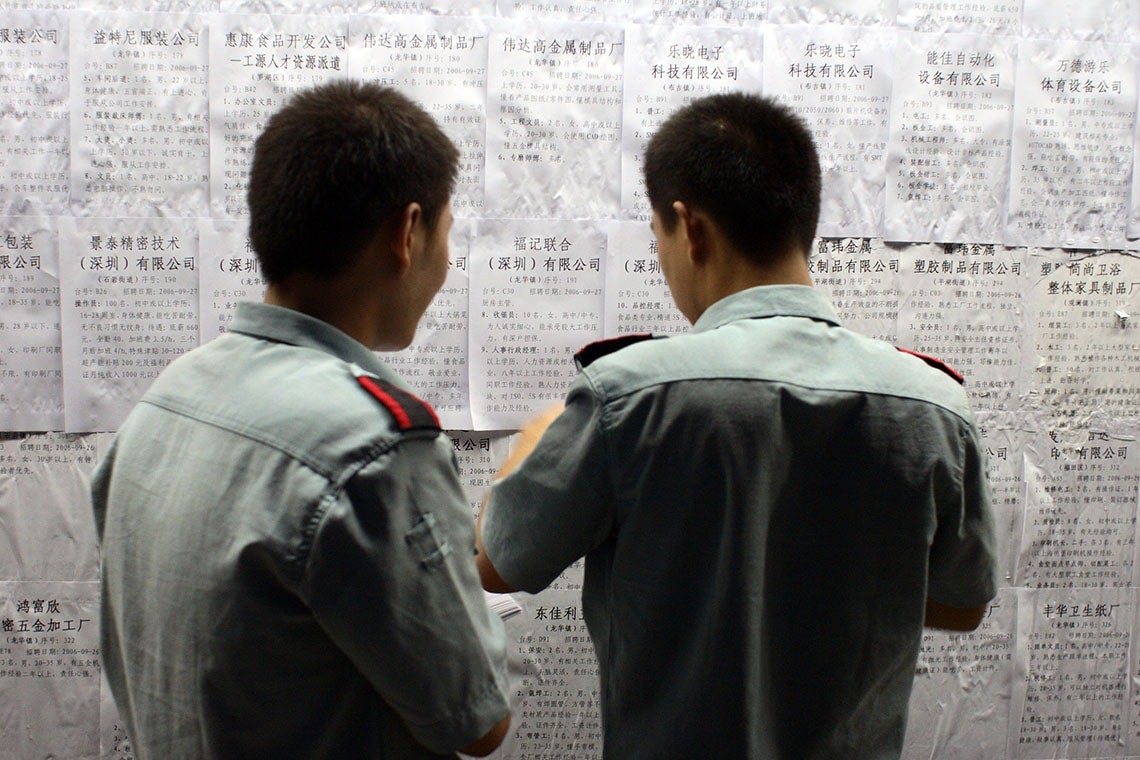 Two men post job advertisements on a job board for migrant workers in Shenzhen, China (photo by Ryan Pyle/Corbis via Getty Images)

In a country where mass protest is illegal, Chinese workers resort to small, pop-up protests and even suicide threats to get their voices heard.

How labour organizations are able to help migrant workers when they can’t rally people in the streets is the focus of a fascinating new book by University of Toronto political scientist Diana Fu.

“I wanted to explore how people and organizations are able to mobilize when the government officially doesn’t allow them to do it,” says Fu, an assistant professor of Asian politics at U of T Scarborough and expert on state power and civil society in China. In Mobilizing Without the Masses: Control and Contention in China, Fu (pictured left) explores the way labour organizations in China operate, offering a behind-the-scenes look at how they’re able to advocate and help migrant workers on issues like access to pay and injury compensation when legal channels have not worked.

“China’s 280 million migrant workers are arguably the most disadvantaged group in China, both politically and economically, and since labour organizations can’t legally facilitate protests on their behalf, they have to show workers alternative ways to draw attention,” she says.

In Fu’s experience, it’s understandably an emotional time for these aggrieved. There’s a lot of fear and uncertainty because many have suffered through a life-changing experience, whether it be a loss of pay or losing the ability to perform their employable skill as a result of a workplace injury.

Many workers have not had safety equipment or even proper lighting, which can lead to injury. She says many have been badly mistreated by their factory bosses, have been injured on the job and failed to receive proper compensation. And after exhausting the available legal channels, which can take a long time, they may end up not getting what they’re entitled.

“Bosses will try everything they can to not pay their injured workers despite Chinese labour laws stating injured workers are entitled to compensation from their employers,” says Fu.

“What often ends up happening is that local government officials are not that keen to step in and help workers because they’re afraid of deterring investors or fear that companies will pack up and move elsewhere.”

She outlines three types of mobilizing tactics that labour organizers have taught workers. One, which is the riskiest in terms of upsetting the state, is to get a small group of people to do a flash protest in front of a government building that may last five minutes.

Another tactic is to put on a so-called suicide show. While some workers have taken their lives to protest exploitation or labour conditions, the mere threat of suicide is often enough to compel officials into action.

“If a worker threatens to jump off a building, which is a very public display, it signals to officials that they will have a big problem on their hands if they don’t act,” she says.

Finally, the least risky tactic involves advocating for workers through popular media like contacting a journalist or using song, dance or theatre.

Fu says many of the labour organizations that help workers were started by migrant workers themselves who have a history of using various tactics to address their grievances. They have since evolved into established NGOs with funding models that can sustain their work. And while workers often find out about these NGOs through word of mouth, it’s not unusual for activists to show up at hospitals and ask how many there were injured on the job. Some activists will even hold up their hand that’s missing a few fingers to gain the trust of workers who may be nervous or hesitant to speak up.

“It really starts as a collective identity formation, that there are others like me who have a boss just like mine who is trying to escape payment and the government is just as unresponsive,” she says.

There’s also been a recent crackdown on labour organization activity, notes Fu. She carried out the bulk of her research from 2009 to 2011 during the previous Hu Jintao administration, but in 2015, many of the important labour leaders from these NGOs were rounded up, tried and given probation or suspended sentences that severely limits their ability to continue helping migrant workers. Much of the crackdown came as a result of a switch in tactics from mobilizing individuals to activities around collective action, like collective bargaining.

“The shift to mobilizing with the masses was critical for this movement because from the state’s perspective it was crossing the line,” says Fu, who hopes her book can offer insight for policymakers on what is being done for workers in terms of improving labour conditions and engage with civil society in China.