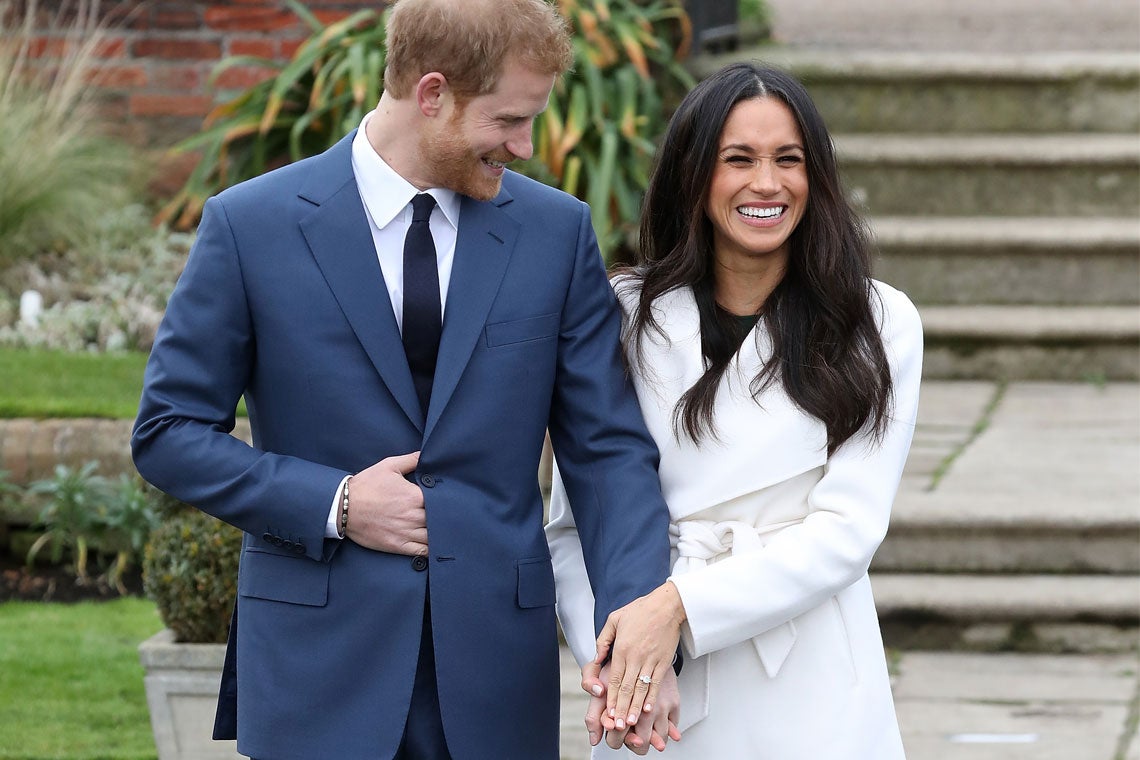 Meghan Markle, with Prince Harry today, will officially join the Royal Family in the spring (photo by Chris Jackson via Getty Images)

The much-anticipated announcement was made today following a secret engagement earlier this month.

The prince and Markle, who have been dating for almost a year and a half, became a Toronto obsession after they were spotted in the city when the American actress was living here while filming Suits.

The couple had their first official outing together in September, cheering on athletes at Nathan Phillips Square during the Invictus Games.

With a wedding date set for spring 2018, speculation and fanfare will no doubt be rife leading up to the big day.

U of T News asked royals expert Carolyn Harris, a history instructor at the School of Continuing Studies, how life is set to change for Markle after the royal nuptials.

Meghan Markle is a non-traditional royal-to-be: She’s divorced, mixed-race and Roman Catholic. Does this signal a change in culture and acceptance for the British Royal Family?

The Queen's reign has been a period of tremendous social and political change. In the 1950s, Princess Margaret decided not to marry the divorced Peter Townsend. In the 21st century, these attitudes have changed. Prince Charles married Camilla Parker Bowles, a divorcee, in 2005, and now Meghan Markle is being welcomed into the Royal Family. The succession reforms that came into force in 2015 allow members of the Royal Family to marry Roman Catholics and retain their place in the line of succession.

This is set to be a huge life change for Markle. What kinds of responsibilities will she have as a princess that she may not have had before?

Meghan Markle already has experience appearing in public before the media and engaging in humanitarian work and these aspects of her life will continue when she joins the Royal Family.

Will she have to give up certain aspects of her current life, such as acting or humanitarian work?

Meghan Markle will almost certainly have to give up her acting career. When Grace Kelly married Prince Rainier of Monaco, her acting career came to an end. As a senior member of the Royal Family, Meghan will have a busy schedule of public engagements and travel to Commonwealth realms.

In contrast to her acting career, Meghan's humanitarian work will expand when she joins the Royal Family as she will be expected to become patron of a wide range of charities. Philanthropic work is central to the lives of modern members of the Royal Family.

Markle’s title after she weds Harry will change to princess – but not “Princess Meghan” – what determines how she is named?

Princesses born into the Royal Family have the title of princess and then their first names. For example, the Queen's granddaughters are Princess Beatrice and Princess Eugenie. When a prince marries, his wife becomes a princess followed by her husband's name. For example, the wife of the Queen's cousin, Prince Michael of Kent is known as Princess Michael of Kent. When Harry and Meghan marry, Harry will probably receive a dukedom and Harry and Meghan will therefore be known as Duke and Duchess, just as William and Kate are Duke and Duchess of Cambridge.

The couple has been subject to invasive coverage of their relationship, with Prince Harry speaking out against the abuse in an official statement. Will this be an issue that will plague their relationship in the future – and is this just something that comes along with the territory of being a royal?

Both William and Harry have been determined to carve out a private life in addition to their public engagements. There is intense public interest in the private lives of royalty but William and Kate have carefully controlled access to their children. George and Charlotte appear in public before the media on fewer occasions than many other European royal children, such as Princess Estelle of Sweden.

If Harry and Meghan become parents, they may adopt a similar approach to the press, balancing public and private life.