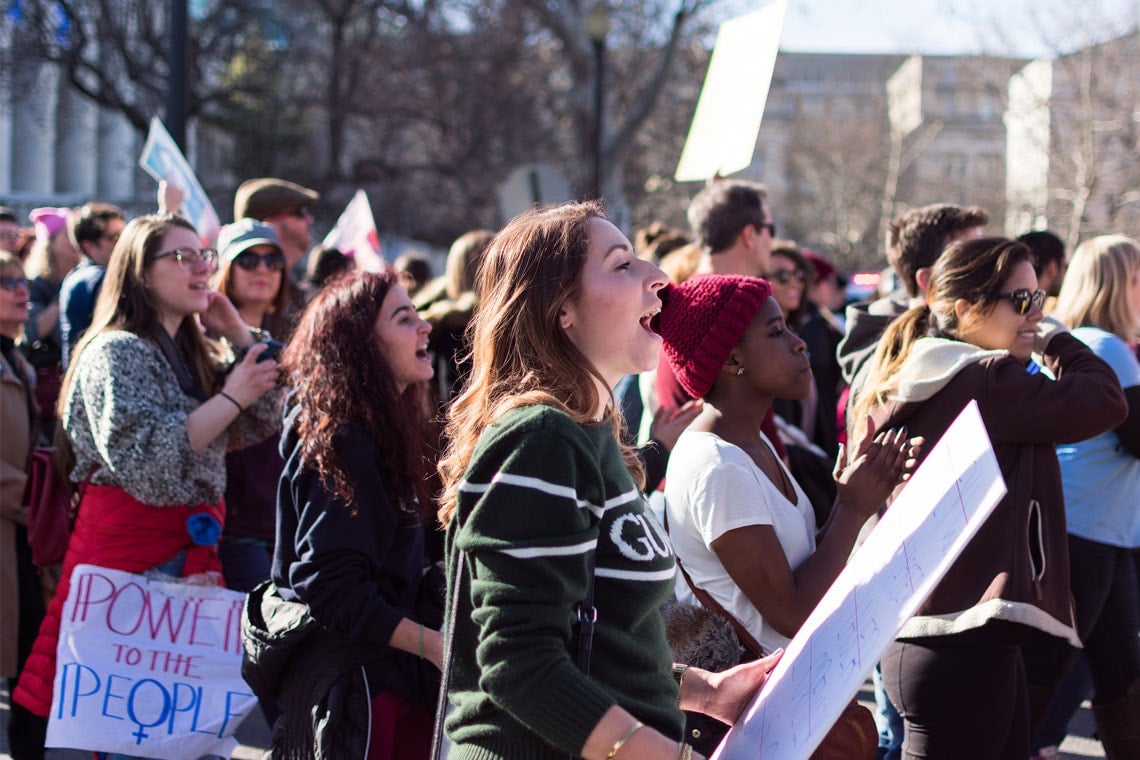 Protesters in Washington D.C. joined activists in cities around the world for the Women's March on Jan. 20, 2018 (photo by kellybdc via Flickr)

This Saturday, on the one-year anniversary of U.S. President Donald Trump’s inauguration, women took to the streets in cities and towns around the world, not only to protest the Republican administration, but also to respond to the widespread sexual abuse allegations that led to the #MeToo movement and to encourage more women to head to the polls in the upcoming midterm elections.

While some cities saw lower attendance at this year’s Women’s March, cities like Chicago saw a jump in the number of protesters from last year – and in Los Angeles, more than 500,000 people are estimated to have attended.

“I think it really marks an important turning point for protesters who in the past might not have paid much attention to mainstream politics,” says Sylvia Bashevkin, a political science professor in the Faculty of Arts & Science.

U of T News spoke with Bashevkin about this year’s marches and the challenge to keep the momentum going.

Has the Women’s March moved beyond protesting the Trump administration specifically?

I think the fact that the U.S. government has been in shutdown mode over the weekend compounds the frustration with the president. Obviously, people who are inclined to go to these Women's Marches are already pretty anti-Trump. But I think, it sends the ripple effects a bit farther in that people who want to do everyday things that involve a federal government bureaucracy are really now able to see what happens when you don't have a functioning government.

The theme of this year’s march was “power to the polls” – do you think we’ll see a reflection of this kind of activism in November’s midterm elections?

Last year, there was a sense that if the Republicans were in control of both the House and Senate, as well as the White House, and the president vowed to appoint very conservative judges into federal court, that they would need to stop his momentum at the midterm.

We know one of Trump's major strengths back in 2016 was that he mobilized so many people who perhaps haven't voted since Ronald Reagan's election in 1980 or had never voted at all. The point about mobilization is a significant one because for a movement to keep people engaged through next fall, it is going to be a challenge. But perhaps the president's actions are actually helping the movement.

After the Women’s March and with the high-profile #MeToo and Times Up movements, do you see the momentum continuing this year for feminist activism?

We're not going to see every potential voter who has certain demographics actually coming out to vote for a Democrat next fall, but I think the steady drip, drip, drip of bad news about obstacles facing women in film and theatre and so on does reinforce a message that says look, there are people who argue that there has been too much change and too fast, and then there's evidence that there has actually been very little change – that certain things are not much different than they were decades ago.

Overall, #MeToo and efforts like it help to solidify the voices that were probably doubtful about President Trump. If you look at Hillary Clinton's memoir of November 2016 – What Happened – you see that there were many, many young women who came up to her after that election was over and said, “We didn't bother to vote, but we're really sorry about what happened.” This was a phenomenon that pollsters pointed to as well. All of those who are shaking their heads and wringing their hands after November 2016, they are the ones that have to be not just mobilized but also organized. We've seen efforts for women to run for office, and we've seen Democratic candidates winning in places where that hasn't happened for a long time in part because it's getting out all the kinds of voters that went up to Hillary Clinton and said they were so sorry she lost. There's evidence this mobilization and organization are having an impact but it's a very long run between now and next fall.

A criticism of the popularized feminist movement is that it tends to exclude people of colour and more intersectional perspectives. Do you think that will change in the next year?

An awful lot of the keynotes and leadership roles [at this past weekend's Women's Marches] were actually, to their credit, in the hands of a very diverse group of women whether they were African Americans, immigrants or from sexual orientation minorities. It seems to me there has been a pretty clear shift in terms of movement leadership and certainly in terms of the voters on whom Hillary Clinton could count for support last year. If some of the polls showed that around 41 per cent of white women voted for Donald Trump, we know that the numbers of African Americans who voted for Trump were generally under 10 per cent according to most polls. That indicates there's a very strong and powerful voice for minority women.

The age range is also quite astonishing. There are a lot of very, very young girls in the U.S. as well as Canada at the marches. There’s the argument that it's just an aging group from second wave feminism from the '60s onward. But, it's actually very demographically diverse, whether you look at age, ethno-cultural identity, race or immigration status.