U of T expert examines crime, punishment and late-Victorian justice 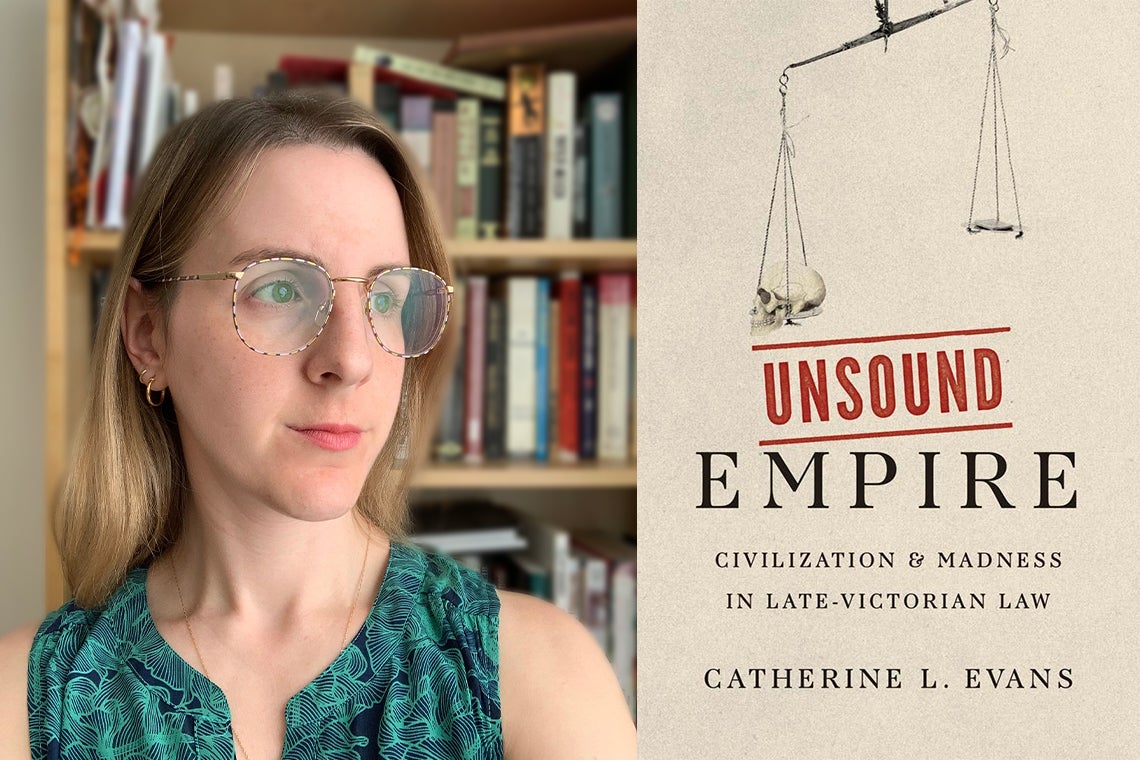 Catherine L. Evans started work on Unsound Empire as she began her PhD dissertation at Princeton University in 2010 (photo courtesy of Evans)

In 1885, during the conflict known as the North-West Resistance, three Cree men in Manitoba were sentenced to death for the murder of an elderly woman from their community.

Although colonial justice was often severe – killing was punishable by death, and that year leader Louis Riel and eight other resistance fighters were executed – the three men were imprisoned but never hanged.

The fate of Charles Ducharme, Wawasehowein and Wahsahgamass epitomizes much about British justice in the late 19th century, according to Catherine Evans, an assistant professor at the Centre for Criminology & Sociolegal Studies in the University of Toronto's Faculty of Arts & Science. The story is one of many tales of imperial crime and punishment described in her new book, Unsound Empire: Civilization & Madness in Late-Victorian Law (Yale University Press).

In her study of justice in the late Victorian era, Evans takes a broad view of what made criminal responsibility. “For me, it's also about personhood and subjecthood more generally," she says, “and thinking about who belongs in the empire: who is a full subject, and who can claim to be free and a free-choosing person.”

Questions of race and gender often factored into whether an accused person was deemed criminally responsible. “There were all these different ways where if you were a white Victorian man, you represented the pinnacle of freedom and rationality. Yet it was believed that the vast majority of human beings didn’t meet that threshold. And if that is sort of an axiomatic part of what it means to be an imperialist, how does that translate into responsibility and the law?” Evans says.

In the 1885 case involving the three Cree men, the accused believed the woman they killed was a “wendigo,” or cannibal spirit. “That case is really interesting because it shows a few things quite well,” Evans says. “One is the existence and vitality of Cree law. The evidence is pretty convincing in my view that the Cree community knew what was going to happen, and these men who were appointed to execute her did it as part of their judicial system. She was agreed to be unwell – and even she thought she was unwell.”

Colonial authorities appeared to concur with the Cree community, and as a result the three defendants had their death sentences commuted. But this action, says Evans, was not taken out of respect for Cree law. Rather, it spoke to the colonial system’s condescending view of the accused.

“One of the generative tensions is the clash between what it means to be a responsible person and an irresponsible person,” Evans says. “So if you are not responsible, then that seems to line up with a lot of the broader civilizational, racial, pseudoscientific theories that were floating around at this time.

“The idea that if you are not white, not English and not male, then you are more primitive and you don’t understand as well as other people do. That’s an idea that really activates and justifies empire. But in the criminal court, that can often act as a shield to maximum punishment and maximum liability – because if you don’t understand in principle, then the law should treat you more gently.”

That rationale also seemed to apply in cases involving women who killed their children. Their lives were often spared because they were thought to be too fragile and emotionally unstable to bear full responsibility for their actions.

In the same era, British justice was also becoming increasingly influenced by a changing understanding of human psychology and the principles of liberalism.

“Ideas about interiority became important,” Evans says. “This is the age where we see the birth of the novel and the growth of liberalism. The autonomous liberal subject starts to become more politically and culturally important.”

In the mid-19th century, the M'Naghten rule was established, determining if and when an accused could be held criminally responsible, or if they were entitled to a defence on the grounds of insanity. The rule says a person can be declared legally insane if it's proven that a mental illness prevented them from understanding “the nature and quality of the act,” or that what they were doing was wrong.

Evans started work on Unsound Empire as she began her PhD dissertation at Princeton University in 2010. Her ongoing interest in the subject of justice in the British Empire emanates both from her extensive legal training – she has a law degree from Oxford University – and from her family background; her neuroscientist father was originally from Wales, and she spent many childhood summers with family in the U.K.

This fall, she will be teaching a course called “Crime and Mind,” which explores legal issues such as criminal intent, self-defence and transcultural psychiatry.

She is also working on another book dealing with the historical intersection of fire, crime and the law. The book will continue to examine the contradictory and often complex nature of colonial justice –which, to present-day readers, may appear influenced by both modern and shockingly outdated ideas.

That contradiction also surfaces in another case that Evans discusses in Unsound Mind: the story of Charles Kirk Clarke, a psychiatrist (or “alienist”) at the Kingston asylum. Clarke worked with patients who were deemed mentally incapable of understanding their crimes. “Clarke was very big into the idea that his asylum was a hospital, not a prison; that his patients should be allowed to perform in musicals, and go skating and decorate for Christmas,” Evans says.

However, later in his career, Clarke turned toward eugenics. “He became a really important proponent of the mental hygiene movement, which was trying to bar 'mental defectives' from entering Canada. So I think it’s important to hold both those things in your mind at the same time: the way that people can be so humane in one way – and so brutal in another.”