U of T expert on dementia's hidden darkness: Violence and domestic abuse 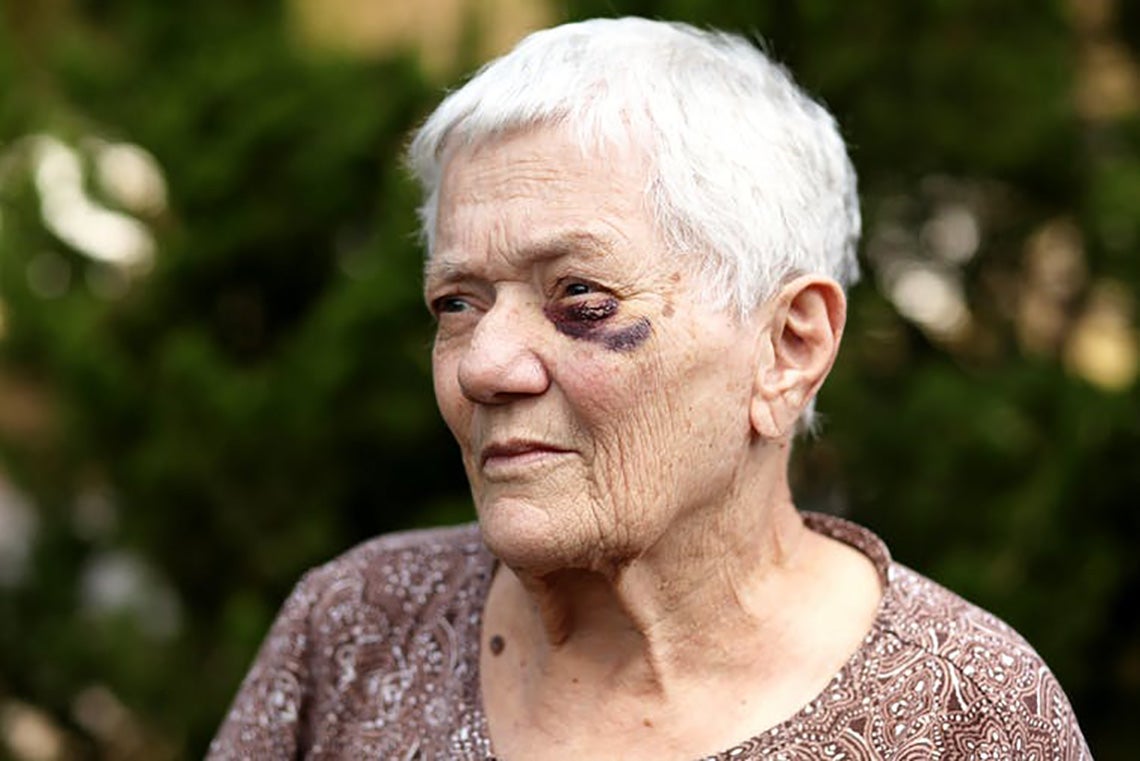 Dementia patients are often the perpetrators and often the victims of abuse. Research also shows that a medical history of head injury can more than double the risk of developing Alzheimer’s disease in some populations (photo by Shutterstock)

Every week in my neurology clinic, I see patients and their families who are dealing with the realities of dementia. Of the many people I encounter, these three stories highlight a growing health issue that I feel is neglected – the complex relationship between dementia and domestic violence.

The first is a story of confusion: “Dad is a nice guy, always has been. But now, because of the Alzheimer’s, he’s confused most of the time – and Mom isn’t coping. She doesn’t know what to do and she is frustrated. It started with her twisting his arm to get him to do things, but now she even hits him sometimes.”

The second is a story of public safety: “The dementia has changed him – he’s not the same man I fell in love with and married so many years ago. He gets suspicious and angry a lot. He screams at me, he yells at our son, he shouts at the postman. He has even punched the caregiver who comes to help him bathe. I suppose we can cope, but I’m worried. We have two shotguns and a rifle in our basement – what do you think I should do with them?”

The third is a scene of abuse: “I got divorced a long time ago because he used to hit me … a lot. He would get drunk every Saturday night and beat me up. He even knocked me out cold, probably five or six times. I haven’t seen him in more than 30 years, but I still feel that he is hurting me. Do you think all of these beatings caused my dementia? Did that bastard cause my dementia?”

These stories are united by a common theme: the complex relationship between dementia and domestic violence. Today, both are commonplace. One in 10 people over 65 years of age in the United States have dementia, typically Alzheimer’s disease (AD), and about one in four women and one in seven men in the U.S. experience severe physical abuse by an intimate partner at some point during their life.

Alarmingly, evidence now suggests that there may be a complex but definitive link between dementia and domestic abuse. Notably, one case-control study that I carried out with colleagues shows that spousal abuse could be associated with the development of Alzheimer’s.

Abuse of older people is not a new problem. Elder abuse is a growing concern on a societal level, with more seniors reporting incidents of abuse and violence. The abuser may be a partner, a relative, a friend or a paid caregiver.

Most abuse tends to take place in the privacy and supposed safety of the home – and so it’s typically a hidden problem. Yet, anywhere between five to 20 per cent of seniors globally may be physically abused, while up to 55 per cent may be abused in other ways.

Dealing with dementia’s intellectual impairments can be especially challenging for unprepared caregivers and family members, and this frustration can sometimes lead to abuse.

Conversely, sometimes the person with dementia is the initiator of the violence rather than the recipient. The onset of dementia is known to coincide with the development of aggressive and angry tendencies. One study found that almost 20 per cent of new dementia patients have behaved aggressively towards caregivers, including loved ones they’ve known for years.

It’s not hard to understand why. In the early phases of the disease, patients are acutely aware of the changes happening to their memories and thoughts and regularly feel overwhelmed. As the disease progresses, they may need help dressing, bathing or performing simple everyday activities, which they have done for themselves, without help, for all of their lives.

This can be devastating to a person’s pride or sense of self; sometimes these emotions can manifest as unusually aggressive or hostile behaviour. Dementia can also trigger violent mood swings and outbursts. At times, these can be extreme; a patient may seem perfectly fine one moment, then be screaming and overtly physical the next.

As yet, it’s a mystery as to why these outbursts occur. But it is possible that changes in the brain’s neurochemistry may destabilize moods and cause more violent emotions.

Finally, there is the possibility that abuse that occurred decades ago could be contributing to the onset of dementia today. There has been much debate as to whether head trauma can lead to dementia or Alzheimer’s disease later in life.

Typically, associations have been vague, and it seemed unlikely that trauma from years ago, with no other apparent effects, could somehow lead to dementia. But we now appreciate that head trauma can be a major risk factor for dementia and Alzheimer’s. In fact, as far back as 1928, the term “punch drunk” was introduced to describe a disorder of progressive dementia that was first seen in boxers.

This was later called “dementia pugilistica” and is known today as chronic traumatic encephalopathy (CTE). Recent research suggests that concussions and other traumatic brain injuries may increase the early brain pathologies that lead to the development of Alzheimer’s later on.

Also, a medical history of head injury can more than double the risk of developing Alzheimer’s disease in some populations, even after many years.

With the World Health Organization estimating that up to 30 per cent of women worldwide have experienced violence from an intimate partner, the global burden of domestic abuse on Alzheimer’s may be a critical factor.

A call to action

Despite its obvious significance, this dementia and domestic violence overlap remains under-recognized and incompletely understood. It’s not a new problem, but because it tends to be conveniently ignored, it has yet to garner proper scientific scrutiny.

As science grapples with these uncomfortable questions over the years to come, stopping the spread of domestic violence seems like an obvious, and feasible first step.

Dementia is more than just three stories or some ambiguous science; it is a call to action.

Donald Weaver is a professor of chemistry at the University of Toronto and director of Krembil Research Institute, University Health Network.