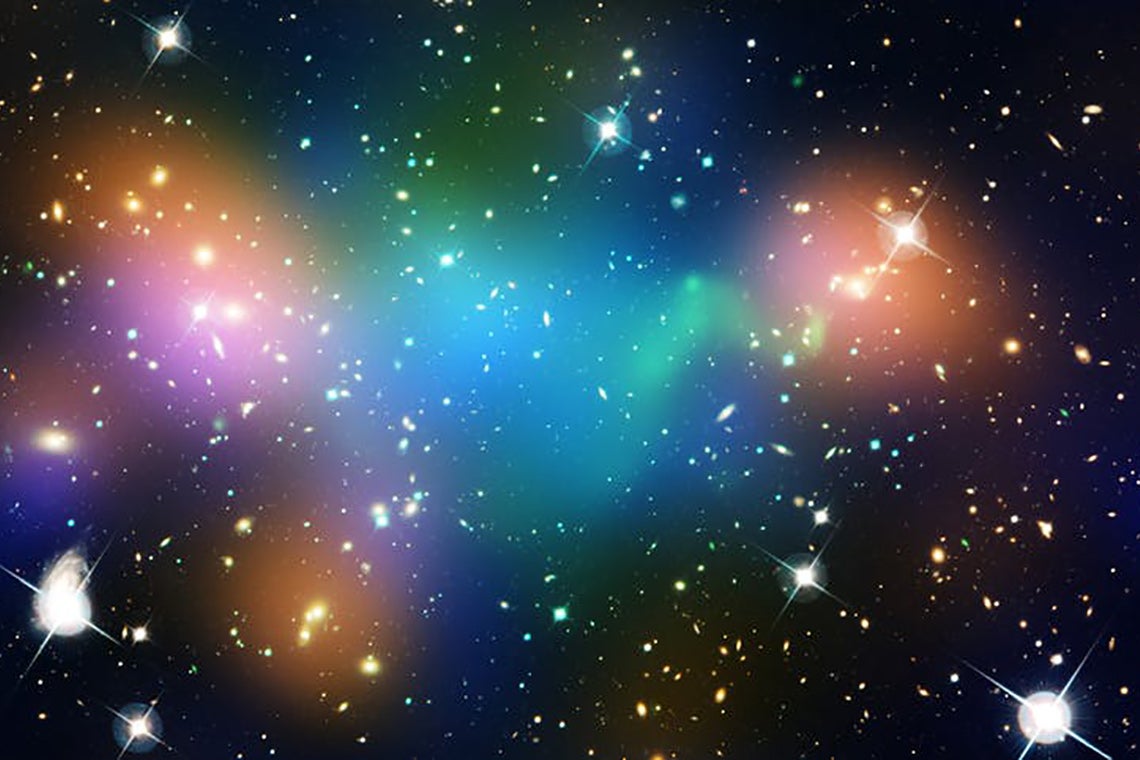 A composite image showing the distribution of dark matter, galaxies and hot gas in a merging galaxy cluster taken with NASA’s Hubble Space Telescope and with the Canada-France-Hawaii Telescope in Hawaii (image via NASA)

There are about the same number of professional astronomers in Canada as there are active Canadian hockey players in the NHL. Hockey players get a lot more press than do the astronomers, and that’s too bad.

Astronomy research is a spectacular Canadian success story, in which a small community of scientists has racked up decades of major discoveries. Canadian astronomers have used government and other funding to participate in the world’s leading telescope and supercomputer projects, making discoveries about black holes, planets and galaxies at a rate well above our peer countries.

Why should Canada support research in astronomy? Astronomy doesn’t directly cure disease or solve environmental problems. What it does do is enrich our culture by reminding us of the larger context in which our day-to-day lives are embedded.

Compared to the vast universe, we are minute creatures on a tiny planet in a typical galaxy and yet we have managed to use our minds and hands to understand many aspects of how the universe works. Every new discovery brings new questions, which serve to drive progress in physics and engineering – some of which does help to cure disease, address social issues, protect endangered species and advance renewable energy – and inspire Canadians of all ages.

Canadians can be justifiably proud of our recent astronomy discoveries. The Canadian-built CHIME telescope, located near Penticton, B.C., is an entirely new type of radio telescope that is revolutionizing our understanding of the mysterious phenomenon known as fast radio bursts.

Canadian scientists and engineers provided one of the key technologies for the ALMA telescope in Chile, part of the worldwide telescope that recently produced the first images of a black hole. A Canadian-led team were the first to ever directly witness planets orbiting another star.

Mark Halpern and Gary Hinshaw of the University of British Columbia shared the 2012 Gruber Prize for Cosmology, for their work to precisely determine the age of the universe. (The answer is 13.8 billion years old, in case you were wondering.)

Some of the credit for Canadian astronomy success goes not only to brilliant individuals, but to a scientific community that works together. Astronomy research is enabled by technology, and the newest, most powerful telescopes are too expensive for any one scientist or university to build and operate on their own. These research facilities are designed, built and funded by huge national and international teams, and planning these large projects can take decades.

To decide which facilities show the most promise for the future, Canadian astronomers have engaged in a series of long-range plans in which the community debates and then makes a recommendation on the most exciting science questions and opportunities for the years ahead. Canadian involvement in nearly all of the discoveries and telescopes mentioned above was the result of priorities set out in previous long-range plans. As the two co-chairs of Canadian astronomy’s long-range plan for the next 10 years (2020-2030), our job is to co-ordinate the decisions on which big discoveries the nation’s astronomy community should pursue next and what telescopes will be needed to make this happen.

Science planning on such long time scales has its drawbacks as well as its advantages. International projects rely on co-operation from many partners and have complex schedules over which Canada has limited control. Canadian involvement in the Thirty Meter Telescope was strongly recommended in the 2010 Long Range Plan and funded by the federal government in 2015, shortly before construction was slated to commence. However, protests and court cases over its planned location on Maunakea – a mountain sacred to Native Hawaiians – means that construction has still not begun. Canadian astronomers have not previously faced such a social issue in conjunction with their science and the community is grappling with how to respond.

In the near future, Canadian astronomers are looking forward to the launch of James Webb Space Telescope. Canada has played a significant role in this $12-billion mission, providing one of the four cameras that will fly on the telescope. Canadian astronomers hope to use it to study the atmospheres of planets around other stars, the most distant galaxies in the early universe and the building blocks of planets and life found between the stars.

The 2020 Long Range Plan is now underway with an exciting array of future possibilities to consider. These include: participation in two new world-leading radio telescopes currently being designed; the first observatory-class space telescope led by Canada; transformations of existing telescopes with powerful new sensors; and developing the technology to find the signatures of life on planets orbiting other stars.

The process will identify the critical present and future science questions and develop a vision for what cutting-edge equipment and facilities will be needed to advance Canadian astronomy. We couldn’t be more excited.

Bryan Gaensler is the director of the Dunlap Institute for Astronomy & Astrophysics at the University of Toronto. Pauline Barmby is a professor of physics and astronomy at Western University.

This article is republished from the Conversation under a Creative Commons license. Read the original article.