Hundreds of supporters of U.S. President Donald Trump stormed the Capitol building in Washington, D.C. on Wednesday, halting a joint session of Congress in which votes cast by the Electoral College were set to be counted – a standard procedural step in the presidential election process. 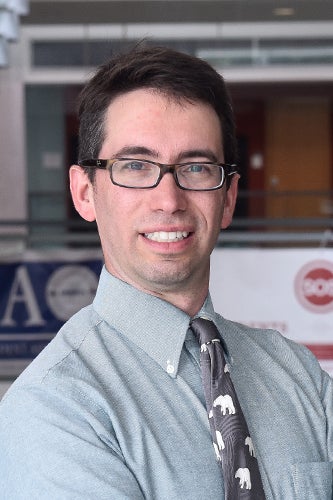 The mob broke windows and clashed with police, while members of the House and Senate, as well as Vice-President Mike Pence, were evacuated from the building.

The National Guard was summoned to bolster security amid the violence, which came after Trump addressed supporters at a Washington, D.C. rally and refused to concede the election to President-elect Joe Biden.

U of T News spoke with Renan Levine, an associate professor, teaching stream, in the department of political science at the University of Toronto Scarborough, about what the unrest means for the U.S., its democratic processes and the future of the Republican party going forward.

How unprecedented is the unrest in Washington, D.C.?

When we look around the world, yes, violence often accompanies elections and losing sides do contest – sometimes violently – the transfer of power. But that has not happened on this scale in America since the 1800s.

As inspiring as it is to hear President-elect Joe Biden talk about “this is not America,” the truth is that violence has certainly been used before and after U.S. Election Day, especially against racialized minorities. That gives a lot of us tremendous pause watching these images. This is a day when an African-American man and a Jewish man were elected senators from the state of Georgia – a state that has lynched both Jewish and African-American men in its past.

What does the refusal of President Trump and his supporters to accept the results of the election mean for American democracy?

Today should have been a boring, staid day. But it wasn’t. It quickly became identified by the president and many of his supporters as the day to stage a protest, to stage an insurrection in opposition to what should have happened today – which was a pro forma reporting and accepting of the election results.

There have been previous incidents where members of the House and Senate have objected to some aspect of the returns, but that was always in races where the opponent had already conceded, and they were objecting in order to bring attention to some concern, some issue with the process – which is very different. This isn’t raising a concern – both what is happening and as led by a number of senators and members of Congress – this was them saying, “No. We want to stop certification of results and we are going to continue to signal that we do not accept these results.”

Is there any mechanism to forcibly remove President Trump from office?

I don’t think it’s designed for this kind of situation, where people like myself are concerned that the president is derelict in his responsibilities to uphold the constitution. That recourse is very clearly set out in the constitution and that’s an impeachment.

Where does the Republican party go from here?

One of the things Canadians need to remember is that one of the hallmarks of American political parties is the lack of strong central control over who gets party nominations and what the party says.

Before the violent protests today, there was a reckoning going on. There were Republicans, some of whom had been stalwart Trump supporters, saying the election is over and we need to accept these results; others were saying that millions of Americans have concerns and we should be taking every step to protect our democracy and ensure that those concerns are addressed in a way that gives people confidence in the democratic process.

There will be a struggle and that struggle will likely continue because it’s not like there are mechanisms saying that Minority Leader Mitch McConnell will be able to say “Okay, I’m throwing you guys out of the caucus,” or “I’m firing you, you’re gone.” They could kick people out of the caucus, but it’s highly unlikely.

When it comes to nominations, they may withhold an endorsement, but one of the current Republican senators, Lisa Murkowski, was already elected after being defeated in a Republican primary by someone else.

So, they don’t have a lot of control. They’re probably going to be fighting. We’re probably going to see, in a year’s time when there are some gubernatorial races or in two years’ time and certainly in four years’ time, fights within the Republican party as to whether or not they’re going to completely reject Trumpism or whether there’s going to be some element of continued embrace of Trump the man or Trump the ideology.