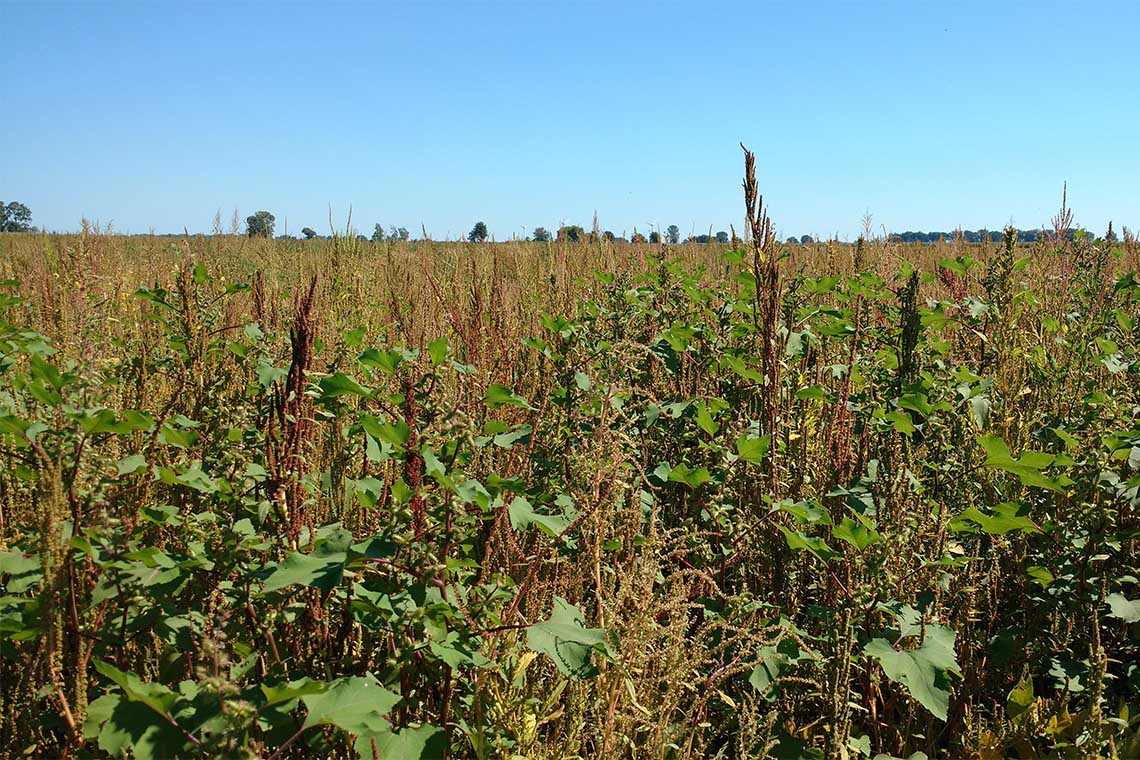 Evolutionary biologists from the University of Toronto are part of a research team that has identified how herbicide-resistant strains of common waterhemp, an invasive weed, have emerged in fields of soy and corn in southwestern Ontario.

The researchers found that the herbicide resistance – first detected in Ontario in 2010 – spread via two mechanisms: first, pollen and seeds of resistant plants are physically dispersed by wind, water and other means; second, resistance has appeared through the spontaneous emergence of genetic mutations that then spread.

The researchers found evidence of both mechanisms by comparing the genomes of herbicide-resistant waterhemp plants from farms in the U.S. Midwest with the genomes of plants from Southern Ontario. Their findings were recently published in the journal Proceedings of the National Academy of Sciences of the United States of America (PNAS). “We used modern methods of genome analysis to look at the genetic similarity of different populations of these plants,” says Julia Kreiner (left), a PhD candidate in the department of ecology and evolutionary biology in the Faculty of Arts & Science and the study’s lead author.

“To our surprise, we found that the genomes of some resistant plants in Ontario were nearly identical to those in very distant U.S. plants. This was evidence that the Ontario plants were very closely related to the U.S. plants and suggests that the former came from seeds that were just picked up from one field and dropped in another.”

While Kreiner and her collaborators did not determine exactly how the seeds were physically transported, this propagation known as gene flow is typically accomplished in different ways. Seeds can be carried by water or in the digestive tracts of animals, or from field to field by way of farm equipment. Genes can also be spread via wind-borne pollen – particularly with a wind-pollinated plant like common waterhemp.

The same DNA analysis identified some resistant plants that did not genetically match any other plants, suggesting they appeared through the independent emergence of a genetic mutation conveying resistance.

The researchers were surprised to discover both mechanisms at play.

“We have two regions, Walpole Island and Essex County in southwestern Ontario, where waterhemp populations evolved resistance,” says Stephen Wright, a professor in ecology and evolutionary biology at U of T and a co-author of the study.

“Because of their proximity, our expectation was that they would have shared the same origin of resistance. But our results suggest different origins – from the movement of seed from a source population in the U.S. as well as independent evolution of resistance in a local population.”

John Stinchcombe, also a professor in ecology and evolutionary biology and a co-author, says, “One of the most striking findings is that we see both ways that weeds could become resistant happening on really short time scales.

“Because herbicide-resistant waterhemp had appeared in the U.S. long before such plants were found in Canada, we were convinced that evolution of herbicide resistance is very rare and had occurred only once,” says Detlef Weigel, a co-author from the Max Planck Institute. “Now that we know that it can occur repeatedly, the next question is whether one can slow down the evolution of new genetic variants that make waterhemp herbicide resistant.”

The researchers studied strains of the common waterhemp (Amaranthus tuberculatus) that are resistant to glyphosate, one of the most widely used herbicides in the world. It’s commonly known by its trade name Roundup.

“Waterhemp is one of the most problematic agricultural weeds in North America,” explains Kreiner. “In the U.S., common waterhemp and the closely related Amaranthus palmeri are causing all kinds of havoc in terms of crop productivity and crop yields.”

“Waterhemp first appeared in one county in Ontario in the early 2000s. As of this year, we’ve found them in seven different counties in the province. So, it’s spreading.”

“The fact that we’re seeing a spread involving all of these mechanisms shows that managing the problem is a real challenge, and that it will require integrating management approaches across different scales,” Kreiner adds.

For example, it illustrates the importance of thoroughly cleaning agricultural residue from rented farm equipment, which is used on multiple farms in a season, in order to minimize the transport of seeds from field to field.

“It also shows the importance of practices like rotating herbicides from season to season,” says Kreiner. “And rotating crops between corn, soy and wheat. It’s practices like these that will minimize the emergence of resistance and limit seed movement.”

At the same time, Kreiner warns that the occurrence of herbicide resistance is an inevitable evolutionary process, and that the challenge requires further study.

“Management practices still don’t treat the underlying cause, which is that herbicide resistance is evolving repeatedly,” she says. “And so with these new genomic resources and approaches, I’m now trying to understand what makes a weed a weed. What are the factors that might make these weeds more likely to evolve resistance and be more problematic than others?

“At this point, we’re running out of herbicides. These plants have evolved resistance to pretty much every herbicide we’ve come up with. And it doesn’t seem like there’s ever going to be a herbicide that a weed can’t eventually evolve resistance to.

“There may be other strategies for controlling these weeds – like weed-control technologies based on robotics and machine learning,” Kreiner suggests. “But even then, the weed has a way to evolve around that, so it’s a really difficult challenge.”

The research was supported by the Natural Sciences and Engineering Research Council of Canada, among others.