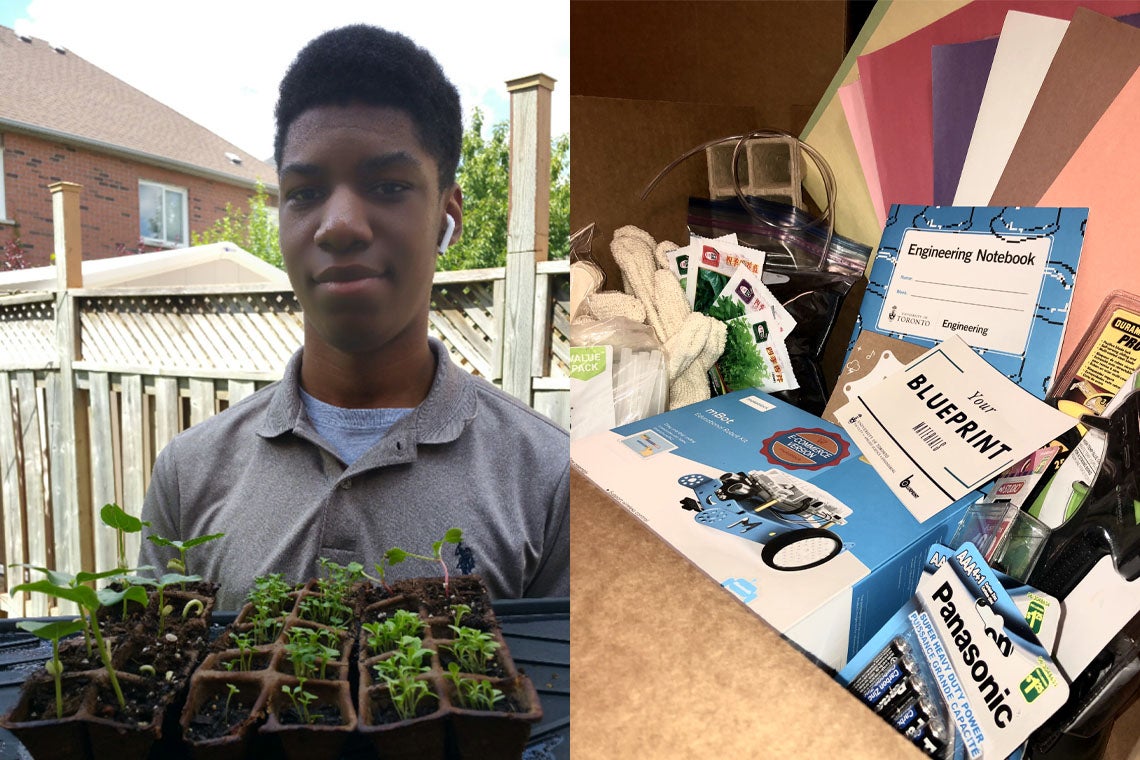 Matthew Robinson, a Grade 9 student from Brampton, Ont., was one of 54 Blueprint participants this past summer. Each student received a box of supplies to complete a range of science and engineering activities (photos courtesy of Cassandra Abraham)

A new outreach program at the University of Toronto’s Faculty of Applied Science & Engineering is empowering Black students from across Canada to explore a future in science, technology, engineering and math (STEM).

Launched this summer, Blueprint engages Black students in Grades 9 to 11 who have a love of STEM subjects. It offers them a chance to extend their knowledge of STEM topics and connects them with mentors who can help them understand what it is like to study and work in STEM fields on a day-to-day basis.

In its first year, Blueprint attracted more than 50 participants from across Canada.

“I often hear Black students say that they are the only ones who look like them in their classrooms,” says Cassandra Abraham, the faculty’s engineering outreach co-ordinator.

Abraham joined U of T Engineering in 2019 with a mandate to enhance programs focused on equity, diversity and inclusion, and directed the team that designed and delivered Blueprint.

“As a Black student who graduated in STEM from a Canadian university, I relate to that feeling,” says Abraham. “By connecting students with mentors – Black undergraduate students at U of T Engineering who are also members of the National Society of Black Engineers (NSBE) – that have also had that experience, we were able to start building a whole new community.”

Blueprint builds on other U of T outreach programs, such as ENGage, which aimed at Black students in Grades 3 to 8. Delivered in collaboration with the U of T chapter of NSBE, ENGage has been running for 10 years and aims to spark a lifelong interest in STEM.

ENGage has also spawned new programs such as Launch: Science and Engineering Camp, which has run in various neighbourhoods around Toronto since 2018, and ENGage High School Saturdays, which began this year.

“After a decade of running programs like these, we now see a critical mass of students,” says Dawn Britton, associate director, engineering student outreach. “The switch has been flipped. They sense that STEM is for them and they want to know more. Blueprint is about giving them the tools they need to take the next steps.”

The first cohort of Blueprint participants were identified by teachers, parents or by community members as being passionate about STEM. While some had previously participated in the outreach programs mentioned above, others were interacting with U of T for the first time, including many who live outside Ontario.

The plan was to bring students to U of T’s St. George campus for five weeks, taking courses and interacting with mentors. But when the COVID-19 pandemic hit, the team quickly pivoted.

“Cancelling never felt like an option,” says Luisa Gragirena-Husbands, a Blueprint team lead. “We were hearing such enthusiasm from the students and their parents that we knew they would want this to happen, even if it had to be a modified experience.”

Over the course of the summer, Blueprint participants completed three academic courses online, each of which addressed a critical topic in STEM:

All courses were taught by a U of T Engineering graduate student who acted as a subject matter expert. The courses were designed to provide a taste of what post-secondary education is like and to expose students to advanced STEM concepts.

The Black undergraduate students who served as mentors were present online before, during and after each class. This enabled the kind of informal community-building interactions that many of the program’s participants would not otherwise have had access to.

“As students trickled in there would be music playing and organic conversations about whatever was happening,” says Gragirena-Husbands. “Sometimes it was a pop culture reference or something to do with what they learned in class yesterday. After class, they would want to chill and hang out with each other. While we couldn’t tour the CN Tower like we had planned, we showed movies and did Tik Tok challenges. We had really high attendance throughout.”

The program also included sessions on career exploration, which were guided by students’ questions.

“They were super curious about resumes and they wanted to know how to get their first job, so we had a session for that,” says Gragirena-Husbands. “We also covered other aspects of professional development such as interviewing tips and SMART Goal Setting.”

The five weeks of academic programming have now been completed, but Blueprint is far from over. The students will continue to spend at least six hours per month with their mentors and the team is hoping to host an in-person conference in March if COVID-19 guidelines allow.

For the entire team, the biggest measures of success were the testimonials received from both the students and their parents.

“Parents told us that their kids would get up early and were excited to log on because it was the first time they were in a class full of people who all look like them, who all had experiences like theirs and who all have the same interests as them,” says Gragirena-Husbands. “That in itself is revolutionary.”

“Students told us: ‘It was amazing to see brilliant Black engineering students at U of T come together to teach and inspire me, and I want to be like them,’” says Britton. “In my mind, that equals success.”