U of T chemists uncover a means to control catalytic reactions 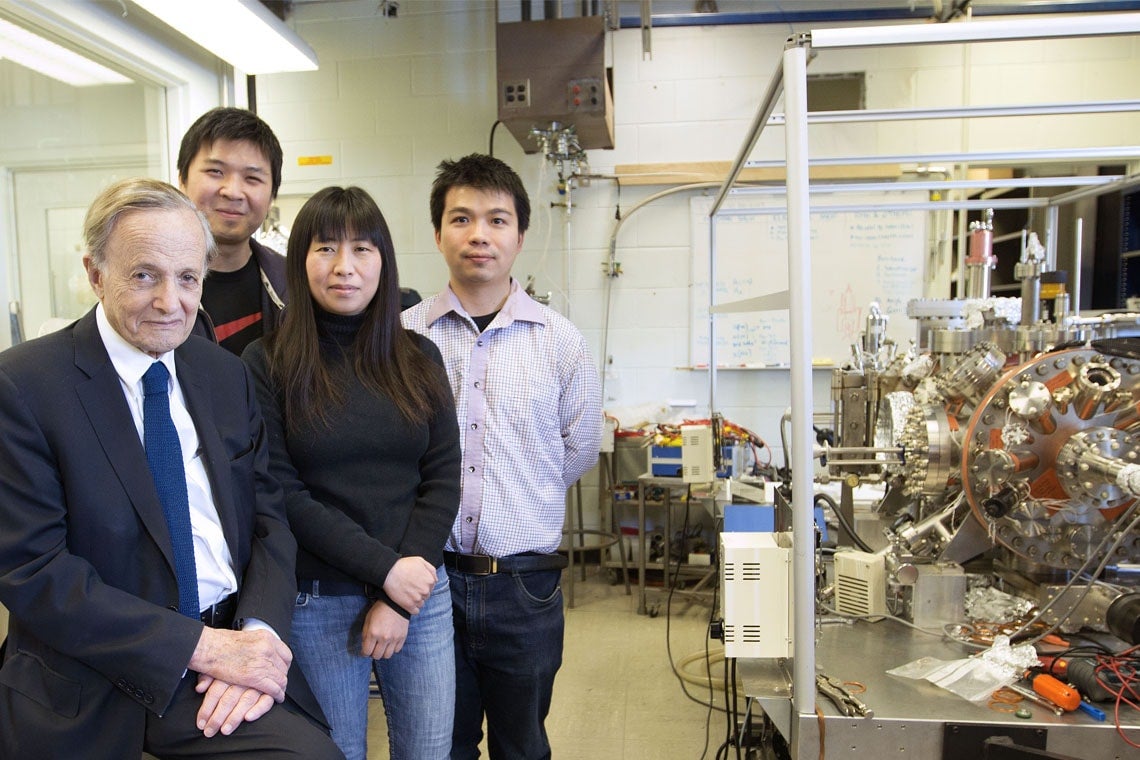 Scientists at the University of Toronto have found a way to make catalysis – the use of catalysts to facilitate chemical reactions – more selective, breaking one chemical bond 100 times faster than another. The findings are described in a study published in Nature Communications.

The team of researchers led by Nobel Prize-winning chemist John Polanyi employed a combination of experiment and theory to discover that the position of the molecule on the catalytic surface is a key factor in determining the rate at which particular bonds break.

“We found that the microscopic positioning of the molecule relative to the catalytic surface below, rendered the catalyst highly bond-specific,” says Polanyi, university professor in the department of chemistry at U of T. “The closer the alignment of the bonds of the molecule to the rows of atoms in the catalyst, the more selective was the reaction.”

The scientists investigated a chemical reaction that involved breaking carbon-to-iodine bonds in the organic molecule iodobenzene by means of metallic copper, a common catalyst. The reaction was initiated by an electron coming from the tip of a microscope, which attached itself to the iodobenzene.

“We observed acceleration in the reactivity of the carbon-to-iodine bonds when those bonds were aligned along rows of copper atoms in the catalyst, as compared to the bonds aligned across the copper rows,” says Kelvin Anggara, a PhD candidate in Polanyi’s research group and a lead author of the study.

The experiment could be explained by a mathematical model developed by the researchers over the past few years, which enabled them to produce a computer-generated movie of the motions of the atoms involved in the bond-breaking at the copper surface. It was the movie that revealed the reason why the copper catalyzed the bonds along its rows in preference to bonds across the rows.

“The copper atoms along the rows were slightly closer together by about the diameter of a single atom than the atoms across the rows,” says Anggara. “This closer spacing promoted the breaking of bonds lying along the rows.”

The method is rooted in the study of chemical reactions taking place at the surface of solid materials that has guided Polanyi and his colleagues for decades. Following his Nobel Prize in chemistry in 1986 for observing the molecular motions in chemical reactions occurring in gases, Polanyi began studying the reactions of individual molecules lying on well-defined catalytic surfaces.

Polanyi says scientists are only beginning to understand how catalysis operates, and that the shift towards green chemistry makes knowing as much as possible about catalysts and how they reduce waste caused by chemical reactions more important than ever before.

“The challenge for the future will be to fabricate metal catalysts embodying atomic patterns that speed chemical reactions along pathways that lead to desired products,” said Polanyi. “Recent advances in the construction of surfaces, atom-by-atom, lend themselves to the fabrication of such engineered-catalysts. We’re now a bit closer to that since we begin to understand what patterns of atoms make the best catalysts.”

The findings are reported in the study “Bond selectivity in electron-induced reaction due to directed recoil on an anisotropic substrate.”

Support for the research was provided by the Natural Sciences and Engineering Research Council of Canada, U of T NSERC General Research Fund and the Connaught International Scholarship for Doctoral Studies. Computations were performed on the SciNet HPC Consortium supercomputer at U of T.