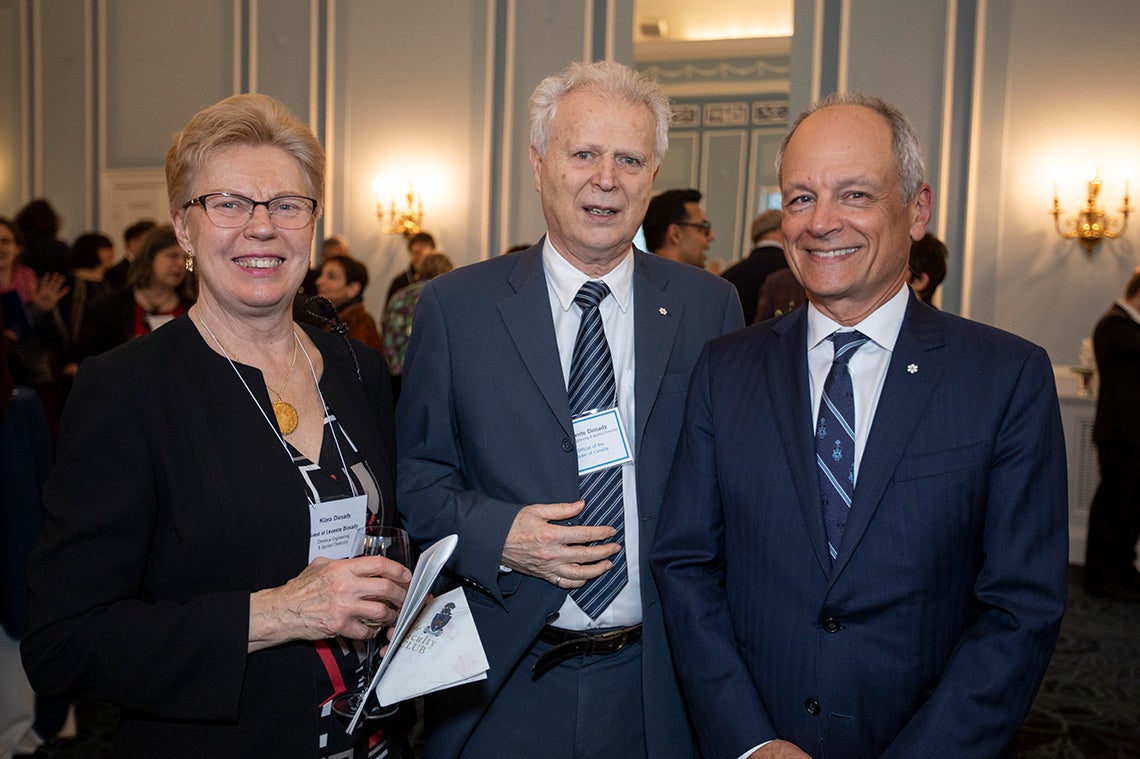 Klara and Levente Diosady with U of T President Meric Gertler. Professor Diosady (middle), in the department of chemical engineering and applied chemistry, was named an Officer of the Order of Canada in December (all photos by Nick Iwanyshyn)

Over the past year, University of Toronto faculty members have collected a glittering array of awards that speak to the high calibre of research at Canada’s top university.

The U of T community came together Monday to celebrate faculty across all three campuses whose work was recognized nationally and beyond in 2018. They range from professors who received lifetime achievement awards to early-career researchers just beginning to make their mark.

In the U of T Faculty Club's Wedgwood Blue Room, U of T President Meric Gertler, Chancellor Rose Patten and Vice-President, Research and Innovation Vivek Goel praised faculty members for their impact in their fields and their contributions to U of T's status as a world-leading institution.

Although U of T faculty make up just six per cent of Canada's total professoriate, they continue to win a disproportionate number of awards across the country, President Gertler said.

In the last decade, he said, U of T researchers have secured: 70 per cent of Steacie Prizes for natural sciences; 40 per cent of Gerhard Herzberg Canada Gold Medals for Science and Engineering; and 40 per cent of Molson Prizes.

“These prestigious Canadian accolades acknowledge the exceptional quality of your work and they also provide you with a springboard for further success on the world stage,” President Gertler said.

This year's honorees include 30 new fellows and college members of Canada's three national academies, as well as new international members of the U.S. National Academy of Medicine and Fellows of the U.K. Royal Society and Royal Academy of Engineering.

Goel acknowledged the “astonishing breadth and diversity of the research and innovation efforts taking place across the university.

“These accolades speak to the recognized impacts of your achievements in the quest to extend the boundaries of knowledge and to answer some of the world's most important questions,” he said. 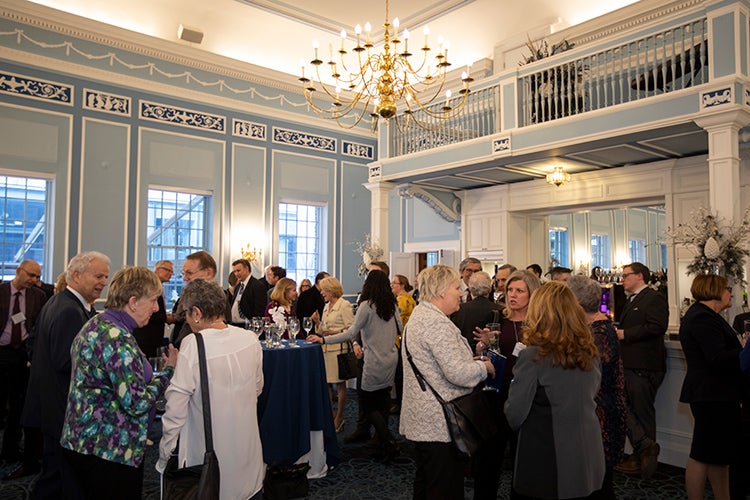 More than 100 faculty members' achievements were listed on the U of T Salutes program this year. 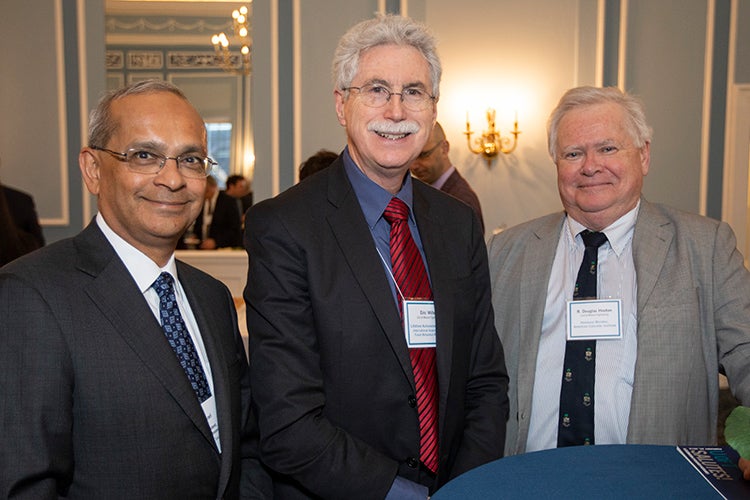 Vice-President, Research and Innovation Vivek Goel (left) with Professors Eric Miller and R. Douglas Hooton, both in the department of civil and mineral engineering. Miller received a lifetime achievement award from the International Association for Travel Behaviour Research, which cited his profound impact during a career spanning almost four decades. Hooton was elected an honorary member of the American Concrete Institute for his contributions to concrete materials, concrete durability and sustainability of concrete construction. 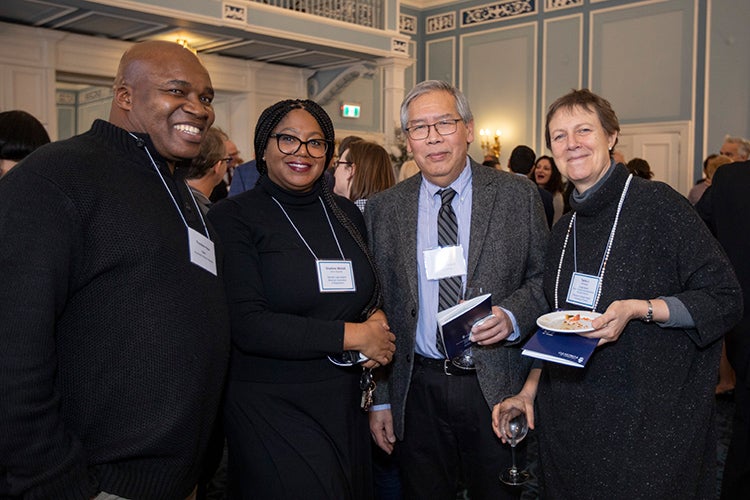 Thembela Kepe, professor and chair of the department of human geography at U of T Scarborough, with Sharlene Mollett, assistant professor in the same department. To their right: Victor Li, a professor of comparative literature and English, and Tania Li, University Professor of anthropology.

Mollett, who did graduate fieldwork on land conflicts in Honduras and Panama, received the Glenda Laws Award from the American Association of Geographers. “It's wonderful to be recognized,” she said.

Li received an Insight Award from the Social Sciences and Humanities Research Council (SSHRC) and a President's Impact Award. She is currently collaborating with an Indonesian anthropologist on an ethnography of plantation life in the country's oil palm plantation zone. “There aren’t that many examples of that kind of collaboration in my field,” she said. 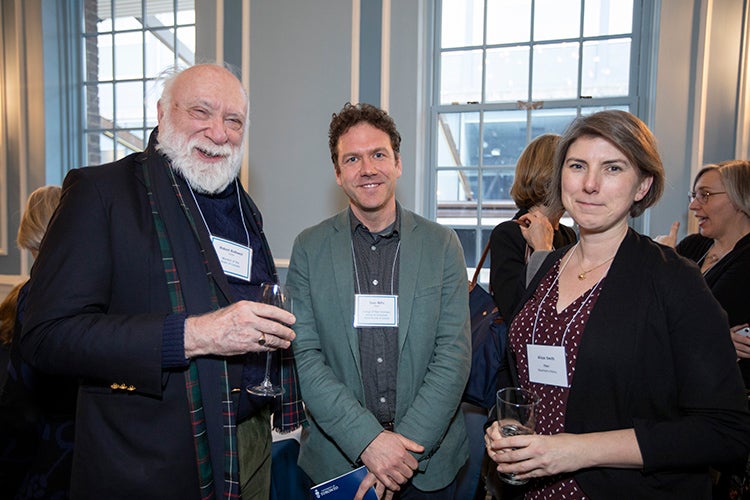 Robert Bothwell, Sean Mills and Alison Smith, all in the department of history. Professor Bothwell, author of The Penguin History of Canada, a biography of C.D. Howe and other books, was named a Member of the Order of Canada last year. Mills, an associate professor and author of The Empire Within: Postcolonial Thought and Political Activism in Sixties Montreal, was elected to the Royal Society of Canada's College of New Scholars, Artists and Scientists. Professor Smith, a specialist in the history of imperial Russia, is chair of the department. 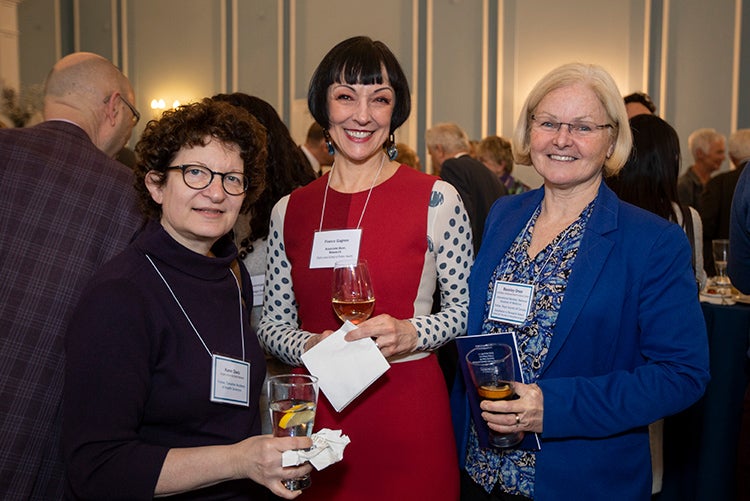 Karen Davis, a professor in the neuroscience division of the department of surgery, with France Gagnon, associate dean of research at Dalla Lana School of Public Health, and Beverley Orser, a professor in the department of anesthesia. Davis, also a senior scientist at the University Health Network, was named a fellow of the Canadian Academy of Health Sciences, one of the highest Canadian honours in the health sciences community. Orser received the Excellence in Research Award from the American Society of Anesthesiologists, was elected to the National Academy of Medicine in the U.S., and was also elected a fellow of the Royal Society of Canada. 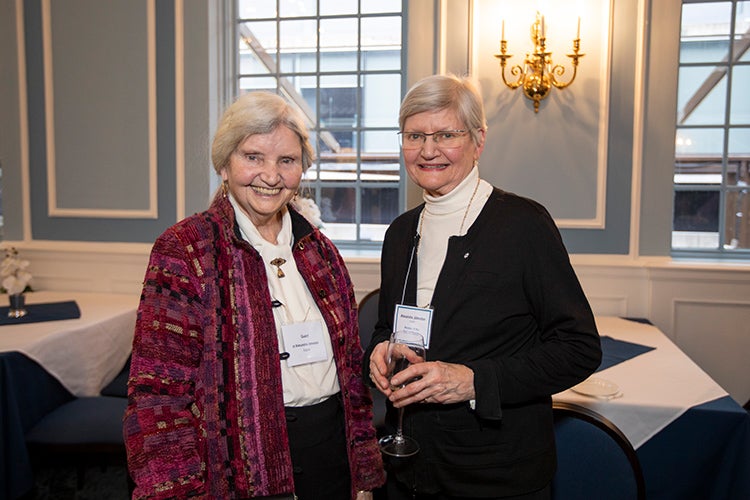 Alexandra Johnston (right) is a Professor Emerita of English and was the first woman to serve as principal of U of T's Victoria College. She was named a Member of the Order of Canada for her scholarly contributions to the humanities.