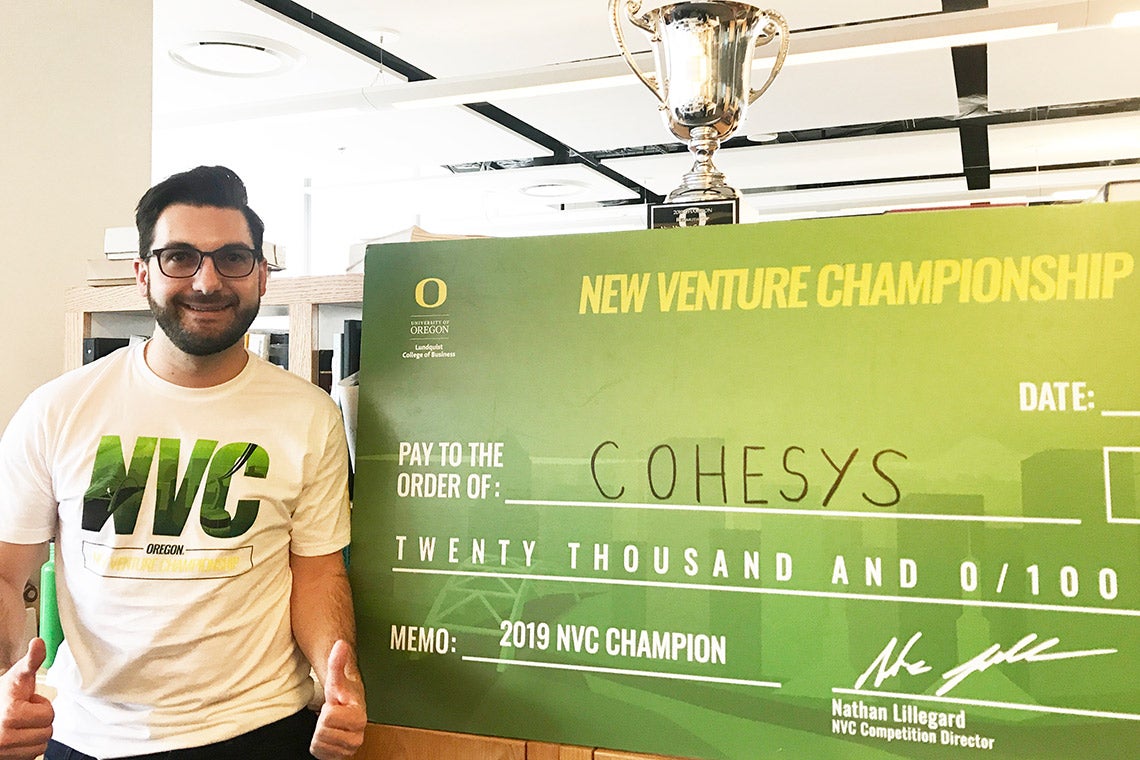 Michael Floros, the CEO of Cohesys and a recent IBBME post-doctoral researcher, hopes the startup's 'bone tape' will one day replace the metal plates and screws used to heal facial fractures (photo by Erin Vollick)

A University of Toronto startup that makes a biodegradable “bone tape” to help heal facial fractures recently took home US$20,000 at an international competition.

Cohesys, a biomedical device business spun out from the lab of Professor Paul Santerre of the Faculty of Dentistry and the Institute of Biomaterials and Biomedical Engineering (IBBME), received first prize at the annual Venture Cup in April at Lundquist College of Business at the University of Oregon.

The startup’s bone tape is non-toxic and breaks down gradually in the body. The hope is that it will one day replace the current tools of facial surgeons: metal plates and screws, improving both surgical times and outcomes for facial surgery patients.

“This is the only adhesive that sticks to wet bone,” says Michael Floros, the CEO of Cohesys and a recent IBBME post-doctoral researcher.

“There is no other tape for bones or anything similar out there.”

Cohesys was chosen as one of sixteen finalists at the competition, which drew teams from as far away as the Philippines. The competition involved six separate pitches to a jury of engineers, business people and medical experts, including a one minute “elevator pitch,” a business plan pitch and a “30 minute pitch.”

Winning the Venture Cup was the latest achievement for the Cohesys team.

They recently took a $10,000 first-place spot at the RBC Prize for Innovation and Entrepreneurship, held at U of T’s True Blue Expo earlier this year.

In fact, the one-year-old startup’s team has been so successful in raising cash they’ve already reached their first major funding milestone: US$1 million of investment capital, which will enable them to make progress on obtaining FDA approval for their product.

The team hopes to hit the U.S. biomedical market in a year and a half.

“It has been impressive to see the advancements made by Michael Floros and his entrepreneurial team at Cohesys as they have continued to hit critical milestones needed to advance this paradigm shifting technology,” says Santerre, who is also a co-director of U of T’s Health Innovation Hub, or H2i, accelerator and a principal investigator in the Translational Biology and Engineering Program at the Ted Rogers Centre for Heart Research.

So what’s the secret to Cohesys’s success?

“Find a way to communicate your idea to a very general and broad audience while still acknowledging the significance of it,” Floros says.