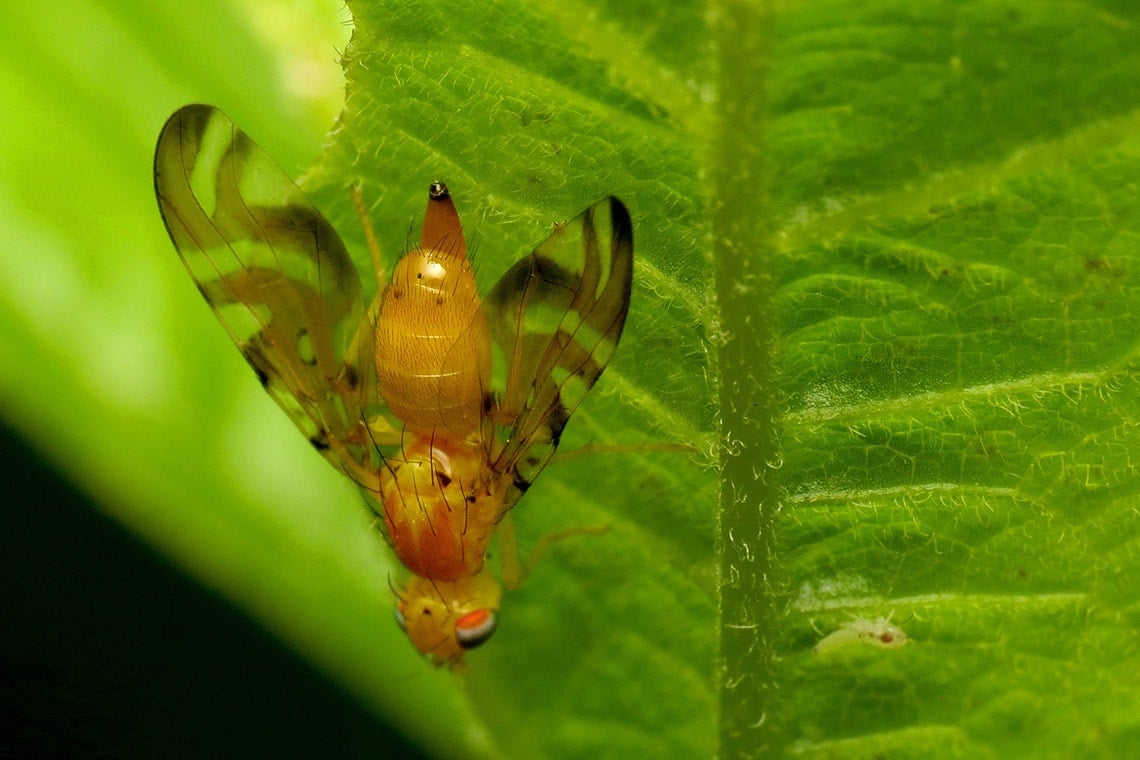 The study involving fruit flies is the first of its kind to show a causal link between epigenetics, genetics and behaviour (photo by Katja Schulz)

When it comes to behaviour, researchers have moved beyond the “nature versus nurture” debate. It’s understood that genes and environment both play a role. However, how they interact at a molecular level to shape behaviour is still unclear.

A new study led by scientists at the University of Toronto sheds valuable light on this relationship. The paper, published in  Proceedings of the National Academy of Sciences of the United States of America, reveals how epigenetics – changes in gene expression that do not change DNA – interact with genes to shape different feeding behaviours in fruit flies. This research unlocks the molecular mechanism that leads “rover” flies to forage for food more than “sitter” flies.

It is the first study of its kind to show a causal link between epigenetics, genetics and behaviour. “We have an empirical example of how this interaction is important for differences in any sorts of behaviour,” says lead author Ina Anreiter. She adds that these findings could help researchers understand how individuals’ behaviours differ, whether fruit flies, mice or even humans.

Anreiter is a PhD candidate in the lab of University Professor Marla Sokolowski in the department of ecology and evolutionary biology at U of T's Faculty of Arts & Science. Sokolowski, who is also co-director of the Child & Brain Development program at the Canadian Institute for Advanced Research (CIFAR) and a CIFAR Weston Fellow, has been studying the “foraging gene” in fruit flies since she first discovered it in the 1980s. The research was funded partly by CIFAR and conducted in collaboration with Jamie Kramer at Western University.

The researchers began by isolating gene products and identifying which ones were key to shaping the different feeding behaviours of rovers and sitters. G9a, an epigenetic regulator, proved necessary for these rover-sitter differences. It interacts with the foraging gene by leaving epigenetic marks, through the addition of methyl groups, on proteins that are associated with DNA of one of the foraging gene’s promoters. Rovers were more highly methylated than sitters, causing a decrease in RNA expression from this foraging gene promoter. These findings showed that the different genetics of rovers and sitters interact with epigenetic mechanisms to regulate behavioural differences.

Anreiter took the study one step further by demonstrating the causal link. She interfered with the RNA transcripts specific to one of the foraging gene promoters and successfully reversed the phenotype that differentiated the flies – and the “sitters” were transformed into “rovers.” This finding provided insight into how complex genes with many gene products act to regulate behaviour. As in this case, feeding behaviour is regulated by only one of four classes of gene products.

This transgenic approach could not be done in humans, who have their own version of a foraging gene. Yet the findings still offer important insights into our behaviour.

“With the human work, we couldn’t really understand the mechanism, how it happened, and with the fruit fly we can,” Sokolowski says.

Anreiter suggests that researchers could model human behaviours in fruit flies using this method, and use it to understand the mechanisms underlying the behaviours.

The research was inspired by discussions in the Child & Brain Development program with experts ranging from fruit fly geneticists to clinicians. One study of interest was advisor Elisabeth Binder’s work dealing with aggression and childhood trauma. Binder showed there are epigenetic marks deposited by a history of child abuse, and that if a child has a genetic predisposition it can shape how resilient they are against those changes.

“One of the big questions in the Child & Brain Development program over the years has been how experience gets embedded in our biology and the mechanisms for that,” says Sokolowski.

With the molecular mechanism for one behaviour unlocked, researchers have a new pathway to uncover potentially many more.

“Epigenetic mechanisms modulate differences in Drosophila foraging behaviour,” was published Oct. 16 in Proceedings of the National Academy of Sciences United States of America. The research was supported by grants from the Natural Sciences and Engineering Council of Canada (NSERC) and the Canadian Institute for Advanced Research (CIFAR), and the Ontario Graduate Scholarship Program.