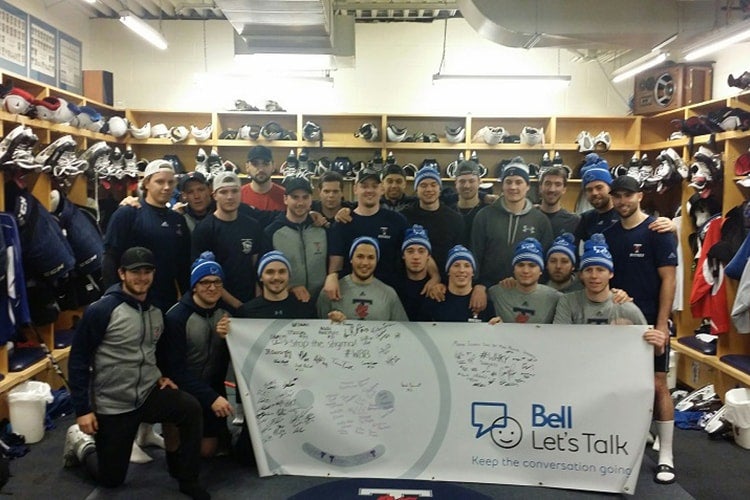 Varsity Blues athletes at the University of Toronto are once again taking part in the Bell Let’s Talk national university mental health campaign.

Student athletes across the country have been helping spread the conversation about mental health at more than 100 varsity and collegiate games and on social media.

For example, the Varsity Blues men’s hockey team hosted the Guelph Gryphons on Jan. 26 in their Bell Let's Talk Game. A booth was set up for the spectators to pick up noise makers, tattoos, speech bubbles and flyers with information about how to help out the campaign.

The evening before the game, the Varsity Blues men’s hockey team was busy signing a team banner pledge to help raise awareness about mental health.

“A lot of people who are very close to me have been affected by mental illness. It can be scary sometimes, so you want to be there to support the people that are going through it. It’s definitely something that needs to be talked about as much as possible,” says Varsity Blues hockey player Ryan Kirkup, who is in his third year of economics and employment relations.

“Having all the sports and our whole team on board raising awareness for the cause is really important,” adds Max Lindsay, Kirkup’s teammate and third-year commerce student.

All 43 Varsity Blues teams have been signing team banner pledges to raise awareness about mental help and posting the photos on social media to keep the conversation going, leading up to Bell Let's Talk Day on Jan. 31.

Varsity Blues baseball player Graham Tebbit says it’s important for him and his teammates to lend their voice to these kinds of campaigns, as student athletes and members of the community.

“Struggling with mental illness is just one part of the battle,” says Tebbit, who is in his second year of a master’s degree in exercise science at the Faculty of Kinesiology & Physical Education. “It’s also important to understand that there are people you can talk to without any stigmas attached.”

Beth Ali, executive director of athletics and physical activity, says university can be a time of many pressures and challenges in the lives of students, so it’s important that they are aware of the support systems in place.