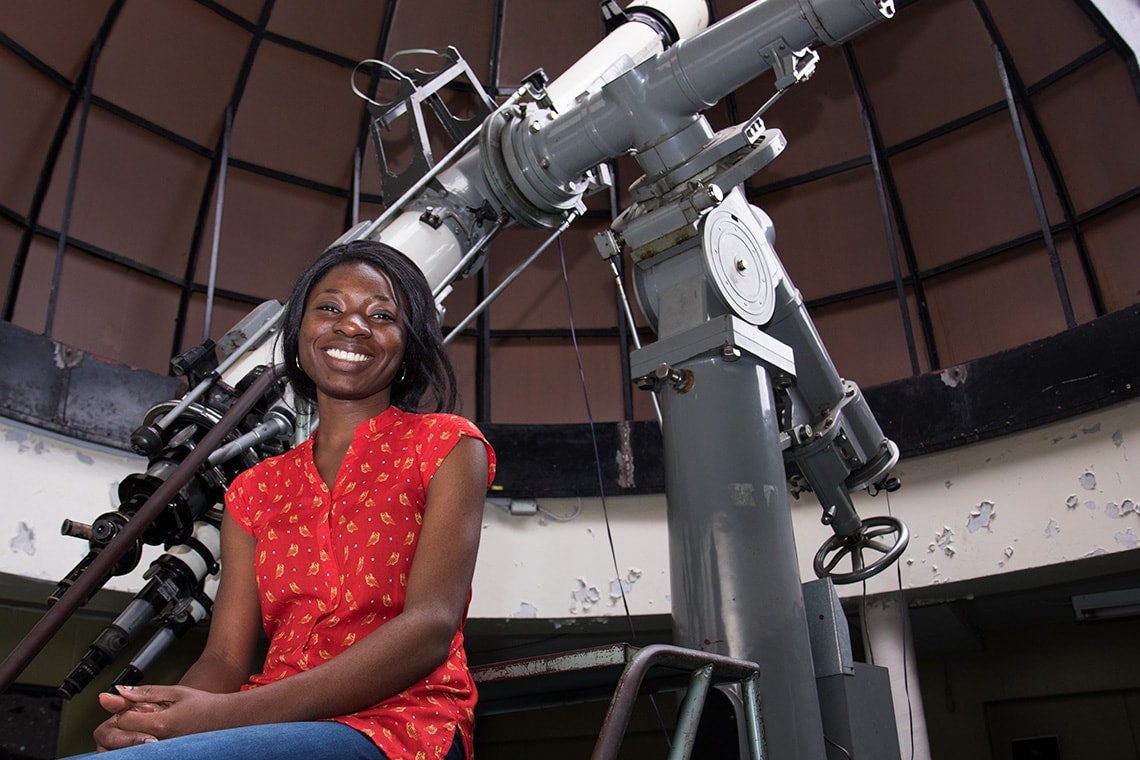 Once a student at a summer school for young West African astronomers, U of T master's student Margaret Ikape will be returning as an instructor. She posed in the observing dome of U of T's McLennan Physical Lab (photo by Geoffrey Vendeville)

Since her childhood in Nigeria, Margaret Ikape has been fascinated by space. She remembers seeing a fireball blaze across the night sky when she was 8 years old and asking her dad what it was.

His answer didn't satisfy her curiosity, triggering more questions: How far are the stars? How big are they? Why is the Earth round?

She went in search of answers to the University of Nigeria, which back then was the only university in the country to offer an undergraduate program in astronomy. She spent time in a program called West African International Summer School for Young Astronomers in Accra, Ghana, which was started three years ago with the help of University of Toronto's Dunlap Institute for Astronomy & Astrophysics.

Today, Ikape is a master's student at U of T. She plans to return to Africa this week to introduce a new group of students to astronomy and space.

She'll be teaching undergraduate students about cosmology at the same West African summer school that she attended.

Not everybody has the opportunity to travel for their studies, she says. “Instead of asking them to travel to find this knowledge, I’d like to bring it to them.”

The idea for the summer school was born in 2012 out of conversations between U of T astronomer Michael Reid and University of Nigeria's Bonaventure Okere. The school’s goal is to help young West African scientists and astronomers realize their potential. Jielai Zhang, a PhD student at U of T whose research partly focuses on galaxy formation, is also teaching there this summer.

Ikape’s supervisor, Professor Renée Hložek, who is from South Africa and did her undergraduate and master’s degrees there, says there is a need for such astronomy workshops in Africa.

“Much of astronomy is done remotely from pristine observing sites, so students can participate from around the world, but one of the big challenges faced is building capacity across a diverse range of countries in the world, especially those that can be resource-limited,” she says.

Ikape says she will be teaching an introductory course, covering the Big Bang theory and the evidence for it like the cosmic microwave background–electromagnetic radiation left over from the event 13.8 billion years ago.

At U of T, she’s working on a project related to how the first stars ionized the universe and how the state-of-the-art Simons Observatory, to be built in the Atacama Desert in northern Chile, will help illuminate the origins of the universe.

“There is so much we don't even know about,” she says.

“It's one of those things that drives me – I want to know what is out there and how everything started.”