U of T associate professor involved in lawsuit against Trump 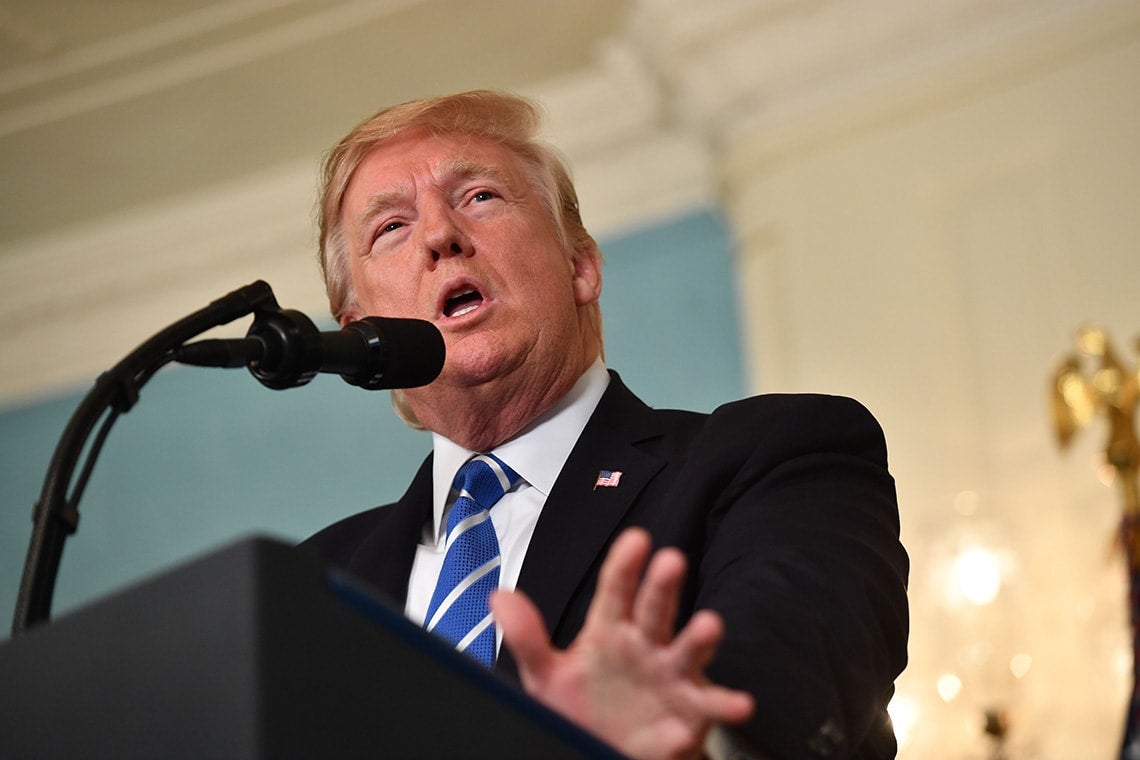 U.S. President Donald Trump, in the Diplomatic Room at the White House earlier this month (photo by Nicholas Kamm/AFP/Getty Images)

University of Toronto’s Simon Stern, an associate professor in the Faculty of Law and graduate faculty at the department of English, is involved in a lawsuit against U.S. President Donald Trump.

A watchdog group CREW (Citizens for Responsibility and Ethics in Washington) filed a lawsuit against Trump in the southern district of New York earlier this year, alleging he is in violation of the constitution’s foreign emoluments clause. The clause bars the president and any other federal official from taking gifts and payments from a foreign government without approval of Congress.

CREW said in the lawsuit there has been a surge in bookings at the Trump International Hotel by foreign diplomats hoping to gain favour from Trump.

The U.S. Department of Justice (DOJ) has asked the District Court to dismiss the lawsuit. DOJ argues that the foreign emoluments clause applies only to “benefits arising from services the president provides to the foreign state.” CREW filed a memorandum objecting to the DOJ'S motion to dismiss, arguing: “This gerrymandered reading contradicts the text of the [Emoluments] Clauses.”

The memorandum reads, “It is also at odds with two centuries of history and a robust body of precedent – from the Office of Legal Counsel and the Comptroller General – administered by government ethics lawyers every day.

"Diplomats openly claim that they patronize the President's hotels to curry favour with him as President – a blatant violation on any reading.”

CREW further points to a lack of transparency with regard to the President’s finances. “They are kept secret not only from the public and Congress but even from his own Justice Department lawyers, who are thus in no position to assure the Court that he is not currently violating the Emoluments Clauses. And, in fact, they offer no such assurances.”

Stern, along with a group of legal historians, filed an amicus brief in support of CREW’s opposition to the DOJ’s motion to dismiss. The case is still pending.

Wajiha Rasul of the Department of English spoke to Stern about his involvement in the lawsuit and arguments presented by DOJ and CREW. "i thought it was a great opportunity," says Associate Professor Simon Stern about getting involved in the CREW lawsuit against Trump (photo by Wajiha Rasul)

How did you get involved in the lawsuit?

My friend and colleague John Mikhail, a law professor at Georgetown University, in Washington, D.C., was already involved in the historians’ amicus brief. He sent me a few questions about  William Blackstone’s Commentaries on the Laws of England, which he was using to try to elaborate the meaning of the term "emoluments" in the 18th century. I had worked with some other legal historians on an edition of Blackstone’s Commentaries, which was published by Oxford in 2016. John was looking at that text, in addition to others. We emailed back and forth and shared some thoughts about how and why contemporary texts are useful and what other contemporary texts might be useful.

Why was it important to participate?

The more I heard about the historians’ amicus brief, the more interesting it seemed. I saw it as a great opportunity to use my historical background and my knowledge about how to look for and use 18th-century resources to shed light on the meaning of the term emoluments.

What do you think about the DOJ’s argument in their brief to dismiss the lawsuit?

The DOJ says that the foreign emoluments clause applies only to “benefits arising from services the president provides.” I think that common sense defies that interpretation of the clause. The clause says that the prohibition applies to “any present, emolument, office or title, of any kind whatever.” It seems nonsensical to say that although the clause covers any present whatever, it covers only a much more qualified set of emoluments.

The point in prohibiting presents is to ensure that the recipient won’t feel be inclined to favour someone over someone else; for example, one foreign state over another when making a treaty – and precisely the same logic applies to emoluments.

DOJ argues that this logic doesn’t apply to emoluments. I don’t see how one framework could apply to presents, and an entirely different framework could apply to emoluments. Both terms are included in the clause for the same reasons. Both terms are there to prevent same kind of harm. The DOJ’s argument, it seems to me, would not hold water even if you were not engaged in the historical investigation. I just don’t see how a “present of any kind whatever” means what it says, but an “emolument of any kind whatever” doesn’t mean what it says.

CREW has been criticized for reading the constitution’s foreign emoluments clause very broadly – what do you think about this criticism?

CREW’s argument does not seem unduly broad to me. The phrase “emoluments of any kind whatever” is meant to be broad. The question then arises: What would be too broad a reading? Well, too broad a reading is presumably one that sweeps in very small benefits, of a sort that nobody would expect to make the recipient favorably disposed towards the giver. Hotel accommodations and visits to golf courses are not very minor commercial dealings. It happens repeatedly and involves significant transactions.

If this lawsuit is successful, what will be the repercussions for the President?

It is difficult to say. At the minimum, I think that congressional approval will be required – that is the way to satisfy what the foreign emoluments clause demands. Possibly, Congress might say no to some emoluments, if they would think there is a conflict of interest. In other situations they might say yes. If the conclusion is in favour of CREW, it will allow Congress to go on record on emoluments. It will bring more transparency.