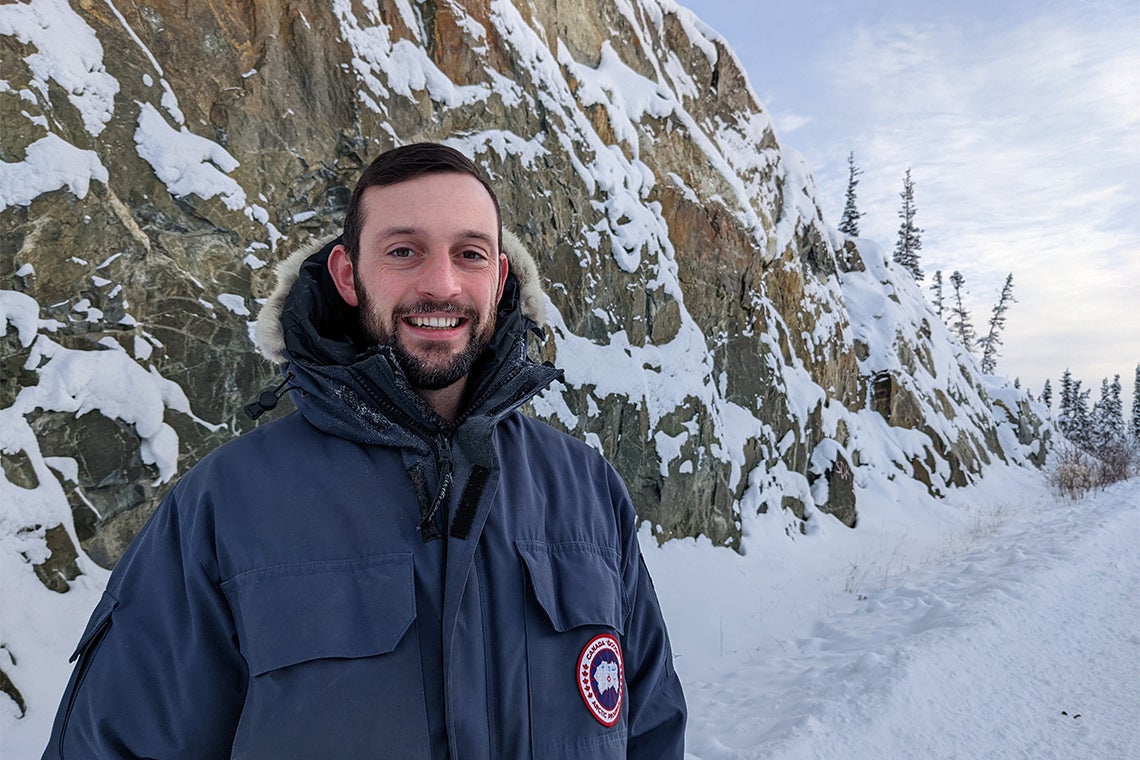 Alumnus Luke Spooner is a senior project manager in the Northwest Territories' department of health and social services, where he says he supports a variety of drug-related projects (photo courtesy of Luke Spooner)

Luke Spooner, a University of Toronto alumnus, has spent than two years supporting the planning and development of a recently launched biosimilars drug initiative in the Northwest Territories – one of only a handful of such programs in Canada.

In his role as a senior project manager in the government’s department of health and social services, Spooner says he supports a variety of drug-related projects using knowledge he gained while studying in U of T’s pharmaceutical chemistry program, a collaborative program involving the Faculty of Arts & Science and the Leslie Dan Faculty of Pharmacy.

“The pharmaceutical chemistry program gives a solid basis in understanding drug manufacturing, which is important to understand rules and regulations around drug products and processes for determining bioequivalence,” says Spooner, who completed his undergraduate degree at U of T in 2015 and then went on to a earn master’s degree in pharmaceutical sciences from the University of British Columbia.

“Understanding the different drug classes and how drugs work is important in supporting drug plan decisions.”

Spooner also credits mentorship and ongoing support from faculty at the Leslie Dan Faculty of Pharmacy for helping him forge his career path.

As an undergraduate student at U of T, Spooner says he was interested in pharmaceutical chemistry, but he also had a growing interest in health economics, which was not offered as part of his program. But with support from the faculty, including Professor Rob Macgregor, who was the pharmaceutical chemistry program director at the time, Spooner was able to enroll in relevant graduate-level courses as electives.

Macgregor says it’s important to encourage students to explore a variety of interests when they are trying to figure out their future paths.

“I believe that a university degree should focus on breadth of learning, which helps the student better understand and appreciate how they and their career fit into the world,” says Macgregor. “Students often get lost in the weeds of exams and grades, and I try to help them understand that what they know is part of a very broad and deep intellectual landscape.

“I emphasize that their university program is just the very beginning of their learning and whatever route they take to explore that landscape will bring unexpected and deeply satisfying intellectual riches.”

Macgregor’s support gave Spooner more confidence to develop his different academic interests outside of the program requirements. After taking the health economics course, he completed a fourth-year health economics research project with Professor Jeffrey Hoch, which allowed him to grow his research skills in this area, and served as president of the Pharmaceutical Chemistry Student Union in his final year of the program.

Spooner also worked as a summer student at the Ontario Drug Policy and Research Network (ODPRN) with Tara Gomes, a scientist at Unity Health Toronto, assistant professor at the Leslie Dan Faculty of Pharmacy and a principal investigator of the ODPRN. He says that, while he didn’t have any experience in pharmaceutical policy or writing when he started the role, Gomes gave him opportunities to do work that gave him valuable experience in pharmaceutical policy and writing that he uses in his career today.

“The faculty was supportive of fostering different interests,” says Spooner. “The help and support I received from faculty members may have seemed like a small thing to them, but it had a big impact on me as a student. If I hadn’t felt supported by the faculty to take these courses, I may not have had developed my interest in the field.”

The Government of the Northwest Territories reported that in fiscal year 2020-2021 spending on biologic drugs increased by 17.6 per cent, and those costs are increasing at an unsustainable rate. The expected savings from implementing the new biosimilars policy are to be reinvested to help fund coverage by increasing the medications that the supplementary health benefits programs cover in the future.

While any biosimilars initiative is a complex operation, being in a northern region means that there were additional considerations, like the logistics of ensuring products could be shipped to certain remote areas. Part of Spooner’s role in supporting the initiative was engaging with stakeholders and experts from across Canada to consider the health policy, medical and patient perspectives, and understand the potential challenges and how they could be solved. One of those experts was Mina Tadrous, an adjunct scientist at Women’s College Research Institute and an assistant professor at the Leslie Dan Faculty of Pharmacy, who Spooner had worked with while at U of T and at the ODPRN.

“Mina provided some valuable insights toward the biosimilars initiative,” says Spooner. “The willingness of outside experts to collaborate and provide their perspectives and insights and support of the policy had an important role in the success of the initiative.”

Although Spooner has long since graduated, he continues to enjoy the support of U of T faculty who inspired him as a student and prepared him for success.

“Mentorship has been so important to me, and I’m really grateful that the faculty was supportive of me during my time at U of T,” he says. “At the same time, the mentorship never really ends. I was excited to share this initiative with all of my mentors at U of T so they can see how all those years of investment and mentorship have paid off.”