U of T alumni reunion draws thousands to four-day event 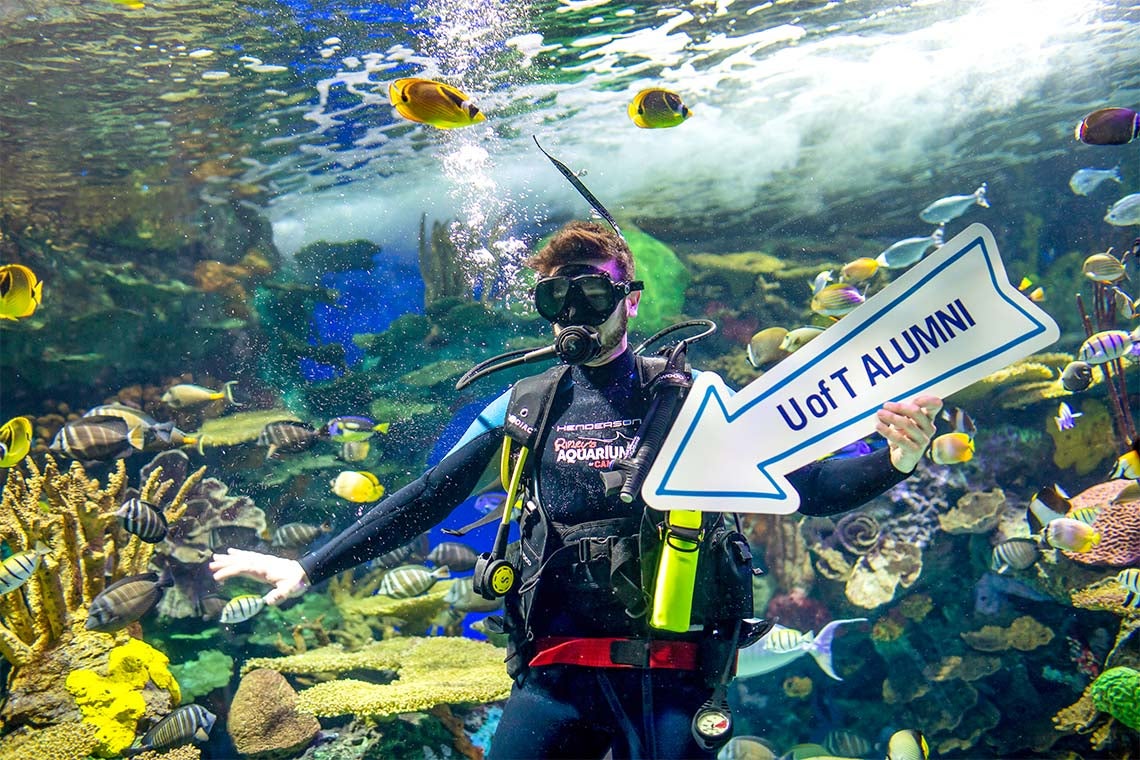 A scuba diver holds a sign during a U of T alumni reunion event at Ripley's Aquarium on May 29, 2019 (photo by Paul Terefenko)

There is little doubt when it comes to Yovan and Pana Mitusev’s strongest memories about their time as students at the University of Toronto.

It’s where they met and fell in love.

They have a sense of connection to their alma mater that they hope to pass on to their children. The now-married couple brought Marcus, 11, and nine-year-old Misha to U of T’s alumni reunion on Saturday in the hope that, some day, they may feel the same way as their parents do about the U of T community.

“We’ve been telling them about all the experiences we had at U of T and the people we met,” said Yovan, who graduated with a bachelor’s of science from U of T Scarborough in 1998, as he and Pana escorted their excited children to the Kids’ Passport event.

“There is a lot of pride that goes with being an alumnus.”

While it may be just a little early yet, Marcus and Misha are both keen to follow in their parents’ footsteps and enrol at U of T.

“The kids were so excited to come to this,” said Pana, who also has an undergraduate degree from U of T Scarborough and a bachelor’s in education from the Ontario Institute for Studies in Education.

“My son wanted to see a lecture, too, and he wanted to bring a notepad and pen. He’s interested in science and our daughter is still deciding – but whatever she takes, she’s going to definitely want to play varsity hockey.” 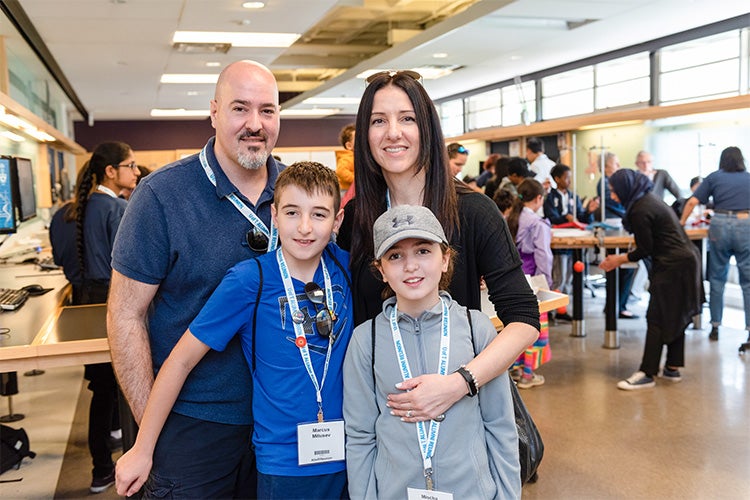 The popular interactive Kids’ Passport event allows children to have hands-on activities in everything from chemistry to archaeology. It’s one of 130 events at U of T’s signature alumni gathering, which was held between May 29 and June 2 this year. Other activities included expert lectures, a BBQ and an event for young alumni at Ripley’s Aquarium.

The schedule also included the LGBTQ+ Spring Soiree last Thursday, where President Meric Gertler noted in his remarks the rich history of LGBTQ activism at U of T, and that this year is the 50th anniversary of LGBTOUT, the oldest LGBTQ student group at a Canadian university.

In all, more than 10,000 alumni from 20 countries registered for this year’s reunion.

Hyung Il Kim, who graduated with a bachelor's degree in engineering in 2002, brought his children – Noah,10, and seven-year-old Clohe – to the children’s event before attending the alumni BBQ and taking them on a bus tour.

“It’s a great program and I want my kids to learn about what U of T has to offer,” he said.

His brother Andrew Il Kim, also an engineering graduate, also brought his children for his first alumni reunion since he graduated. He said one of the highlights was making “slime” with Audrey,13, and nine-year-old Annette in the chemical lab, which they loved.

His strongest memories of U of T?

“I think it would be getting together with my friends for dinner, then we’d go study at the Robarts library,” said Andrew. “I miss my university years. Looking back now, it seems very short, only four years, but I enjoyed it very much.” 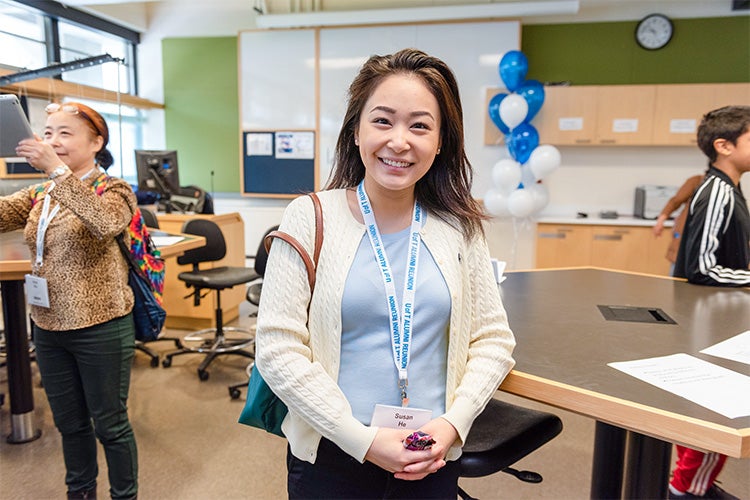 For some alumni like Susan He, who completed a master's in teaching at the Ontario Institute for Studies in Education in 2018, the memories were much fresher as they attended their first reunion weekend.

She celebrated her birthday by bringing her mother Alice and 11-year-old brother Steven to the kids’ event.

“This is my first alum reunion so I wanted to see what it was all about, and I thought it would be a great opportunity to show my brother around campus,” said He, who is currently working on a master’s degree in education at OISE.

“He’s very interested in coding, programming and building his own video games. I think he’d fit into the U of T culture and what we’re known for.” 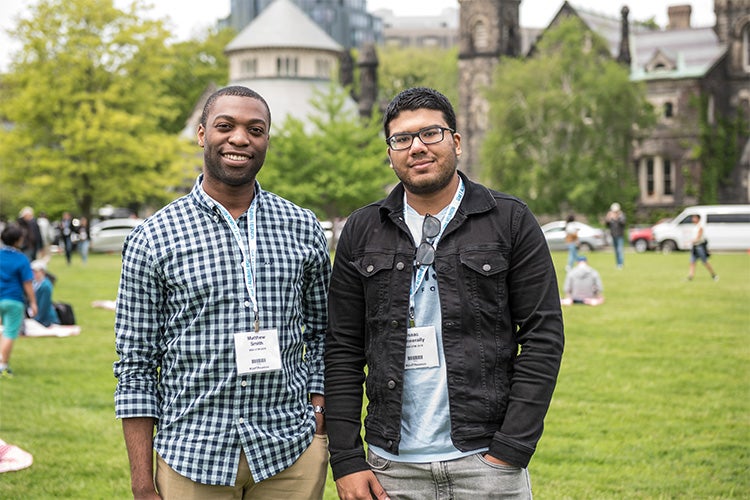 It was also the first alumni reunion for Matthew Smith and Isaac Ameerally, who both received undergraduate degrees last year in business administration from U of T Mississauga. They decided that the BBQ was the event they really wanted to attend.

“I love this school, and it feels amazing to be back where I got my diploma a year ago,” said Smith.

“It’s sort of a homecoming of sorts – being with your peers again – and it’s great to know you are part of a community of people all over the world who hold this place in such high regard.”

Ameerally said he felt a strong sense of nostalgia as he reconnected with former professors and fellow alumni.

“Even after just one year, you have all these stories to tell and share about your experiences since graduating.”

For others, the annual reunion has become a ritual of sorts. 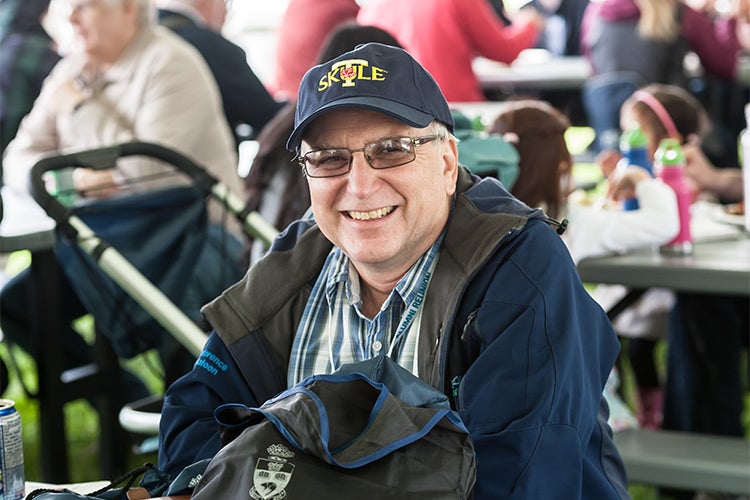 Norm Hann, who has been coming to alumni reunion events for decades, is a fan of the “stress-free” lectures, calling them a form of “continuing education” (photo by Lisa Sakulensky)

As he enjoyed the BBQ on Saturday with his grandchildren, Norm Hann, who received his engineering degree from U of T in 1977, said he makes it a point to attend the stress-free lectures every year.

“To me, it’s continuing education. I always learn a lot from the lectures, and this year I got to bring the family,” said Hann.

“Plus, it’s great to wander around the campus with no exams to worry about.”