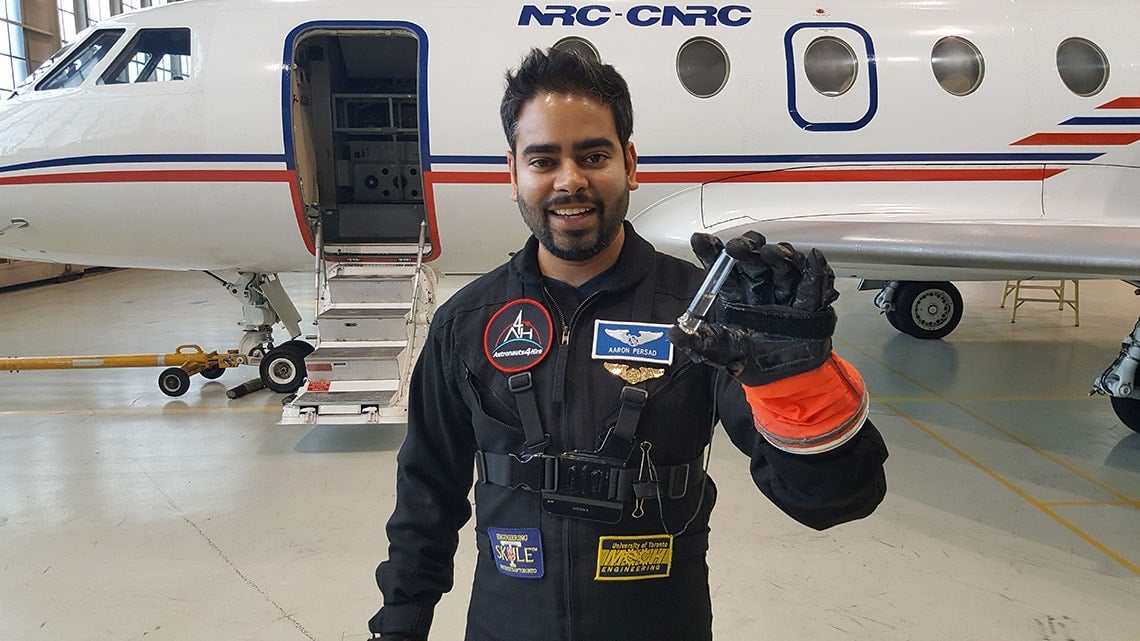 Aaron Persad shows off a small sample of water he took on a microgravity simulation test flight in November 2016. Persad is one of 70 candidates the Canadian Space Agency is considering to become Canada’s next astronaut (photo courtesy Aaron Persad)

Five on the list are U of T engineering alumni; others include a marine geophysicist, a Canadian Armed Forces official and severe weather researcher with Environment and Climate Change Canada

Aaron Persad is one of 11 U of T alumni named to the Canadian Space Agency’s shortlist of candidates to become Canada’s next two astronauts.

“I felt excited, honoured and a bit surprised since I knew I was competing with very highly qualified colleagues,” said Persad. “While space is big, the space community is small, and I am delighted to see that several colleagues are also in the CSA shortlist.”

A postdoctoral researcher currently working in the lab of Mechanical and Industrial Engineering Professor David Sinton, Persad is one of 72 people from across Canada under consideration for two upcoming astronaut roles with the Canadian Space Agency (CSA).

Other U of T alumni on the shortlist include:

Any alumnus or alumna picked for the program would be following in the footsteps of such U of T astronauts as alumna Julie Payette and U of T Misissauga alumna  Roberta Bondar, who took the crest of Erindale College, as U of T MIssissauga used to be known, into space with her as the first Canadian woman astronaut.

Persad’s dream of going to space began at the age of seven and his pursuit of it accelerated at U of T Engineering. During his undergraduate studies, he completed his Professional Experience Year internship at the CSA, including a flight in a Falcon-20 jet where he got experience the sensation of free-fall for the first time.

“It felt fantastic. I remember my legs had the tendency to float up toward my chest. I had to consciously keep them down,” said Persad.

Persad’s PhD research, supervised by Professor Emeritus Charles Ward, focused on solving a decades-old mystery about the behaviour of water in microgravity, specifically the shape it takes within a closed container. The seemingly simple question has important implications for life-support systems in space.

Persad is standing by for the data downlink, which will include videos and high-resolution images of the microgravity experiment.

Outside of his research, Persad has been recognized for his teaching excellence and has led a number of educational initiatives, including a company that delivers robotics technology education to young children.

The above video, taken in November 2016, shows Persad bringing his experimental apparatus aboard a Falcon-20 jet to test it in free-fall conditions. Persad hopes to compare the behavior of water in jars from that experiment to those currently aboard the International Space Station (photo courtesy of Aaron Persad)

This is Persad’s second attempt to become an astronaut, having applied during CSA’s previous round of recruitment in 2008, when he was a master’s student at U of T Engineering. Since then, Persad has greatly enhanced his technical expertise and aggressively pursued astronautics training through the non-profit organizations Astronauts4Hire and Project PoSSUM.

“I used my previous evaluation as a checklist to prepare for a future call. For example, I was asked questions like ‘Do you have piloting experience?’ or ‘Have you ever taught a post-graduate engineering course?’” said Persad. “For the last eight years, I’ve been working hard to turn every ‘no’ into a ‘yes.’”

A final decision from the current round is expected by June 2017.

“I know my family and friends are cheering me on,” said Persad.