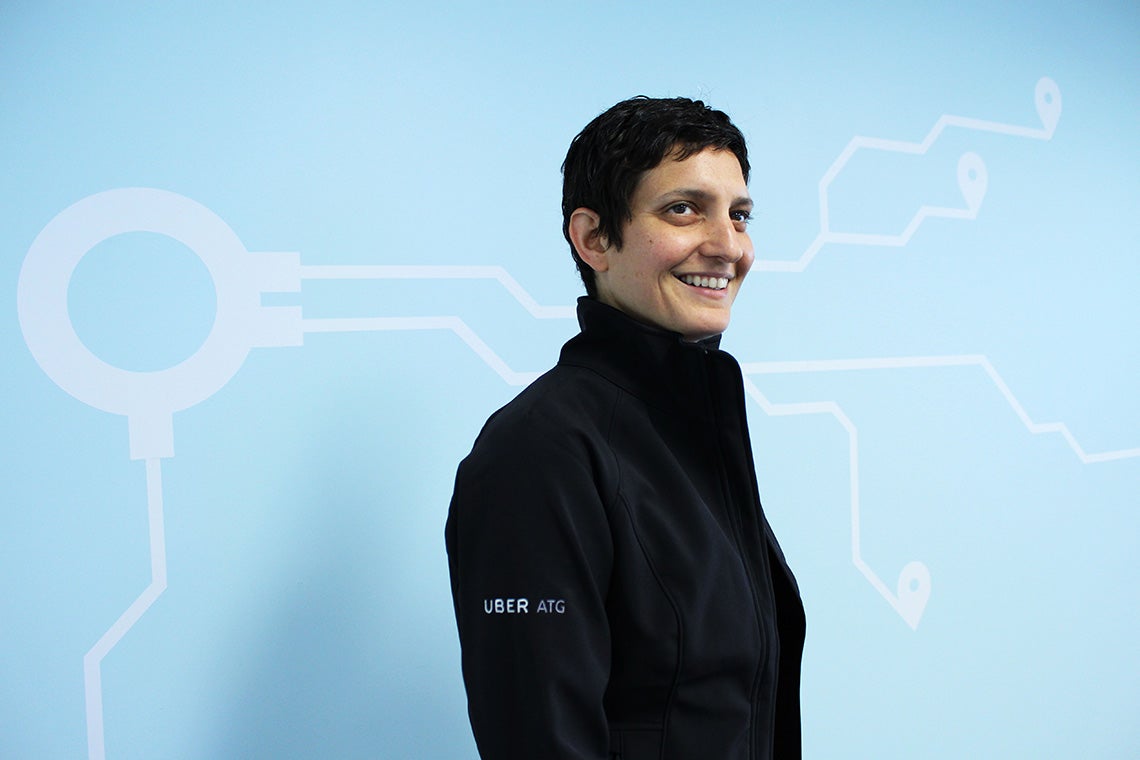 Alumna Inmar Givoni, an autonomy engineering manager for Uber’s Advanced Technologies Group in Toronto, says computer science is a field that grew on her over time.

“In high school, I took computer science as well as advanced courses in physics, chemistry and math,” says Givoni, who earned a doctorate in computer science from the University of Toronto.

“I chose to study computer science and computational biology for my bachelor’s, thinking this would be a great segue into a career in neuroscience. Somewhere along the way, I bumped into machine learning and was immediately captivated.”

Givoni is one of 50 Canadian women celebrated on Parliament Hill in Ottawa Monday as part of an “Inspiring Fifty” group of women in the Canadian tech and innovation sectors.

Seven other U of T alumnae made the list:

“I am really excited by the fact this initiative exists and hope we can continue to celebrate the contribution of Canadian women to STEM,” says Givoni. STEM fields span the sciences, engineering, technology and mathematics.

U of T’s Nina Haikara spoke with Givoni about the honour and her inspiring work.

What motivated you to pursue a doctorate specializing in machine learning?
In the army [Israel Defense Forces], I trained as a software engineer and enjoyed the actual work and the impact it had, but I still didn't consider it a career – I wanted to become a neuroscientist.

When I graduated [with my bachelor’s], I decided that rather than pursue neuroscience, where I would do research aiming at understanding the brain, I would pursue a doctorate in machine learning, where I would try to create a brain-like machine.

Why do you think it’s important for Canada to promote the advancement of diversity in the STEM fields?
Many studies indicate that diverse businesses and organizations thrive, and are more financially successful than ones that are not diverse. There are also many examples of how underrepresented groups are negatively impacted by technical decisions made by homogenous groups. Seat belts, for example, were designed, mostly, for males, resulting in higher chances of fatal injuries to women. To me, it’s obvious why diversity makes for safer products, more successful companies, and more satisfied employees. I'd love to see Canada, an especially forward-thinking and inclusive country, as a leader in that effort.

You help inspire others by guest lecturing and supporting student workshops. Why do you think it’s important to keep inspiring women who are already in the field?
I target my lectures and speaking engagements around a variety of audiences, including young women who have not yet made their career decision, women in undergraduate and graduate programs, and women already working in the industry.

It's difficult for women to remain motivated when they are in environments where they feel different, or underrepresented. As an undergraduate, for example, it's hard to feel successful when many of your classmates exude more confidence, and celebrate their success in a way you feel you can't, since women get a strong societal signal to be humble. As a graduate student, it's hard to find your confidence while giving a tutorial to a class where you are the only female. As a professional in the field, it’s hard to walk into a meeting of 15 people and be the only woman, and ensure people respect you and your technical opinion.

Feeling this way in school and professionally often results in many women quitting or switching fields, making retaining top talent just as difficult as recruiting women into STEM. I’ve been in all of these scenarios at one point or another and understand what it feels like. I hope to become an example of how perseverance and passion pay off, that it can be done, and that it's worth it. I look forward to spending more time with young women in STEM or interested in STEM.

You work with U of T’s Raquel Urtasun, an associate professor of computer science, who leads Uber ATG in Toronto. What do you find inspiring about women working at the forefront of advanced research and development?

Working with Raquel has been nothing short of amazing, and so much fun. It's a regular source of inspiration to have such a strong leader, who is among the top in the world in the fields of artificial intelligence, computer vision, and self-driving.

Every woman who is recognized in her field, and in our case recognized in the technical space, is a source of pride and inspiration for others to find their own path.