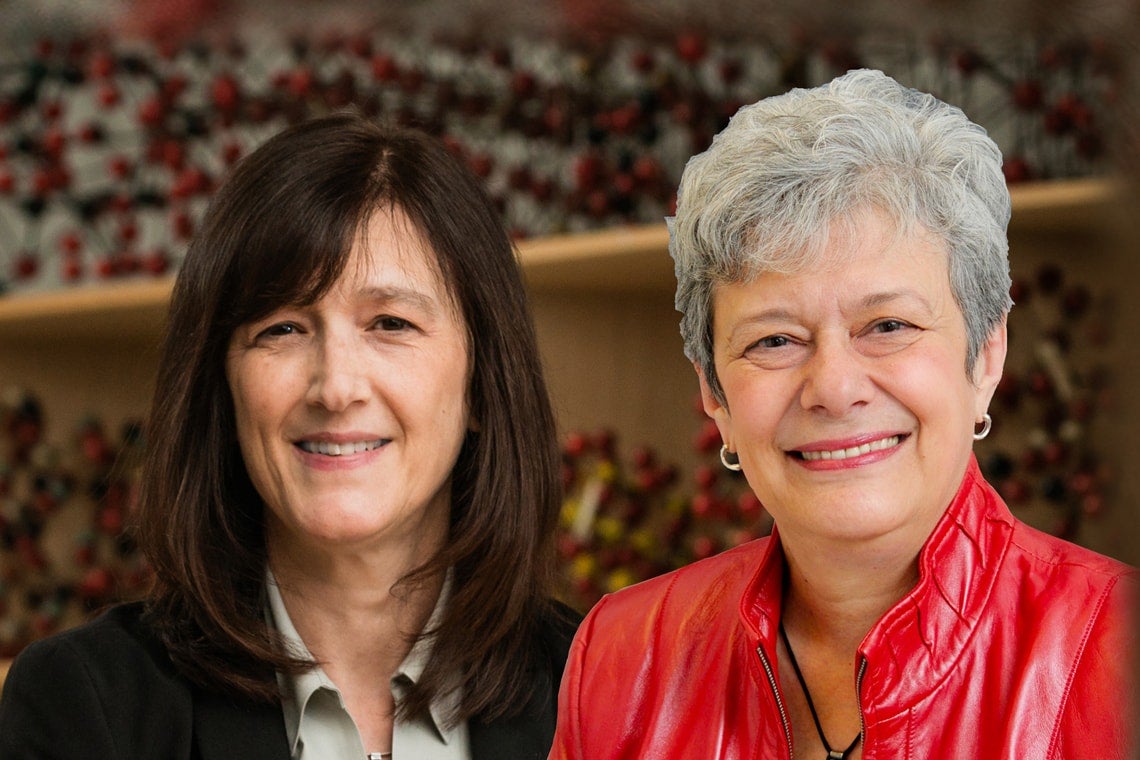 Barbara Sherwood Lollar, left, and Linda Hutcheon, right, have been awarded medals by the Royal Society of Canada (photo composite by Diana Tyszko)

The Royal Society of Canada is honouring two U of T scholars, Linda Hutcheon and Barbara Sherwood Lollar, both holders of the prestigious distinction of University Professor, a title held by only two per cent of the tenured faculty.

Hutcheon, University Professor Emeritus of English and Comparative Literature, will receive the 2016 Lorne Pierce Medal for achievements in critical literature which have transformed understanding of “Canadian identity.”

Sherwood Lollar, University Professor in the Department of Earth Sciences, has been selected to receive the Bancroft Medal, a prize for work that contributes enormously to public understanding and appreciation of the earth sciences.

“Both Linda Hutcheon and Barbara Sherwood Lollar are enormously respected in the international community as influential leaders in their fields,” said David Cameron, dean of the Faculty of Arts & Science. “This latest accolade reminds us how highly they are both valued by their home country as well.”

Hutcheon became a scholar of Canadian literature following her training in comparative European literature, a step she describes as “natural for a Canadian watching the exhilarating post-Massey Report flowering of our literary culture.  In the '70s, the excitement was palpable, and continues to be so.”

The 1951 Massey Report had warned that Canadian culture was becoming invisible in the shadow of the American invasion of film, radio and periodicals, leading the government to require Canada’s mass media to encourage Canadian content.

"Being awarded the Lorne Pierce Medal, with its emphasis on the study of the literature of Canada, is an immense honour for me, and not only because of the many brilliant Canadianists who have won it before,” said Hutcheon. Previous medallists include Alice Munro, Rudy Wiebe and Rosemary Sullivan.

Hutcheon has achieved broad international recognition as a literary theorist, a major critical voice on Canadian writing and culture, and as an interdisciplinary collaborative scholar. The author of nine books and co-author of four in collaboration with physician Michael Hutcheon, she has also edited 16 books or special issues of journals and published 300 articles and book chapters.

A translator of Québec writers, Hutcheon also co-edited a book of interviews and fiction on what was for her a defining part of Canadian culture: its multicultural as well as bicultural/bilingual identity. Her Other Solitudes (1990) grew out of what she calls her “crypto-ethnic” experience: her married name conceals her cultural identity as an Italian Canadian.

“I was driven by a desire to understand why culture matters, how Canadian culture helps shape individual, regional and national senses of self, and how cultural and linguistic diversity can and should be seen and practiced as forms of enrichment and invigoration rather than abrasion and instability,” she said.

For Sherwood Lollar, being selected as the recipient of the Bancroft Award marks an important tribute to the depth and breadth of the earth sciences.

Sherwood Lollar’s research ranges from projects that inform public policy and improve remediation of groundwater resources globally, to spearheading international research collaborations to uncover the most ancient water on earth, a discovery with potential implications for life on other planets.

These deep waters, found three kilometres beneath the Canadian Shield, were reported in the prestigious journal Nature and has captured both the scientific community’s attention and the public’s imagination with several news outlets noting the discovery as one of the top 10 science stories of 2013.

A second paper, also published in Nature on the hydrogen and methane-rich waters of the deep crust sparked similar attention for its implications not only for expanding our understanding of Earth’s subsurface life and habitability but for insights to the origin of methane – and possibly life – on Mars.

While the scientific community was aware that certain organic contaminants – particularly petroleum and chlorinated hydrocarbons – could be remediated by naturally occurring microbial communities, there was no solid “in situ” evidence of the effectiveness of the process and this, understandably stood in the way of regulatory approval and support.

Sherwood Lollar provided the necessary proof.  In the words of research microbiologist John Wilson of the U.S. Environmental Protection Agency, CSIA was like “turning the lights on” by providing one of the few convincing means of demonstrating the effectiveness of natural microbial alternatives.  The scientific approaches and research field Sherwood Lollar pioneered are now in widespread use throughout the world.

In 2000, Sherwood Lollar was selected by Time as one of 25 “Leaders for the 21st Century,” and in 2013 Canadian Geographic named her one of the “Top Canadians Changing the World.” In 2012, she received the Eni Award in Protection of the Environment, a prestigious international prize for outstanding research in fields of energy and the environment.

Hutcheon and Sherwood Lollar will receive their awards at a ceremony at the Royal Society of Canada’s Annual General Meeting on Nov. 18, 2016.