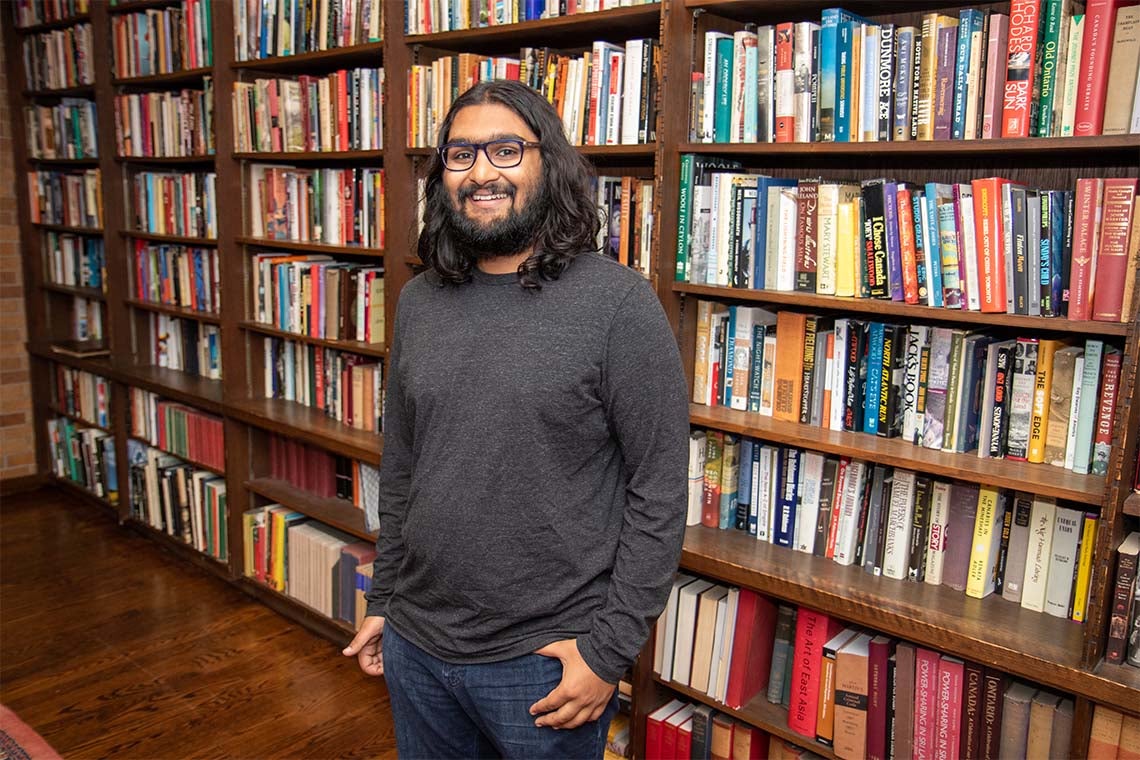 Seshu Iyengar of Fredericton is one of two PhD students who are recipients of C. David Naylor University Fellowships, named after U of T's 15th president (all photos by Perry King)

Seshu Iyengar and Joel Goodwin have a great deal in common.

They are both in the first years of their PhD programs at the University of Toronto, studying in the sciences, and are active in their communities. They are from the Maritimes – Iyengar is from Fredericton and Goodwin is from New Glasgow, N.S.

The two are this year’s recipients of C. David Naylor University Fellowships, which recognize outstanding candidates from the Atlantic Canadian provinces. Named after David Naylor, U of T’s 15th president, the fellowship provides $30,000 to students who are entering the first year of a full-time doctoral or doctoral-stream program. The C. David Naylor Fellowships were established through the generosity of the Arthur L. Irving Family Foundation.

C. David Naylor fellows are chosen based on their strong academic standing and their commitment to community service.

“It’s been a humbling privilege to have met a steady stream of amazing students from Atlantic Canada doing graduate work at U of T with supports from fellowships that carry the name of some defunct academic bureaucrat,” said President Emeritus Naylor. “However, they should really be called Irving Foundation fellows, because the program is truly a testament to the vision and generosity of Arthur and Sandra Irving.

“The Irvings are tireless volunteers and life-long philanthropists who have supported many fine institutions and good causes in the Atlantic region,” he added.

“At a recent dinner in Toronto, past recipients of the C. David Naylor Fellowship gathered to welcome and congratulate this year's recipients Seshu and Joel,” said Arthur and Sandra Irving in a statement. “All the fellows had an opportunity to share their research. It was a proud moment as we reflected on the wonderful group of outstanding students from Atlantic Canada who are now a community of David Naylor fellows, so wonderfully named after our good friend who we hold in the highest regard.”

Iyengar, a graduate of the University of New Brunswick (UNB), excelled in the classroom, earning two bachelor’s degrees – one in philosophy and the other in biology-physics and mathematics.

Outside of the classroom, he established a vegan and vegetarian club and led UNB’s philosophy society. Off-campus, he promoted the value of science education, which included a Ted Talk he gave in 2017.

Iyengar is taking a multidisciplinary approach to his studies at U of T. Working on a PhD in physics, his research will focus on biological physics, examining the physical principles involved in modelling biological processes like aging and cancer. Under the supervision of Andreas Hilfinger, an assistant professor in the department of chemical and physical sciences at U of T Mississauga, Iyengar wants to better develop drugs for cancer treatments, improve patient interventions and enhance genetic therapies.

“We can ask the question: ‘Is it actually physically possible for this [cell] receptor and this drug to interact the way they are supposed to?’” said Iyengar, who will study biological data and their theoretical statistical constraints.

He finds U of T to be a great environment for interdisciplinary thinkers. “The people I’ve been meeting so far are absolutely incredible. You meet so many smart, engaged and quite diverse people.”

He said he is grateful to be named a fellow, and that the U of T is showing a strong connection to Atlantic Canada.

“It’s nice –  anytime someone gives you a title, you’re going to perk up a bit.” 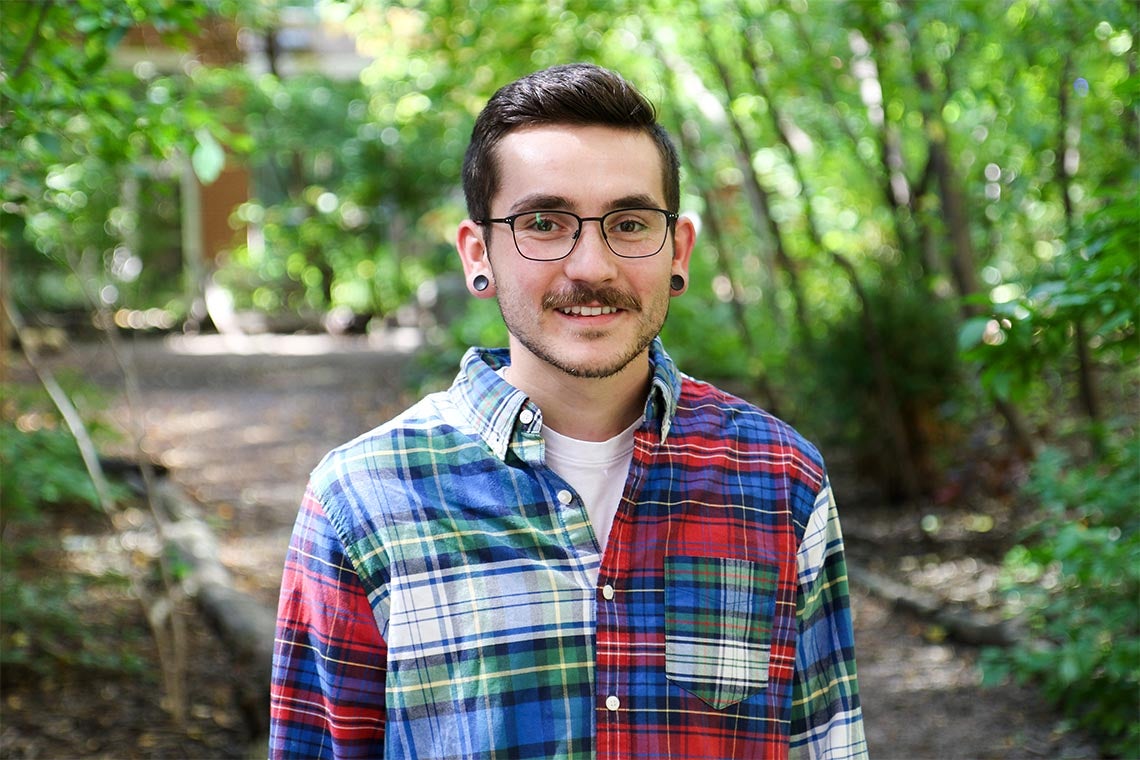 Joel Goodwin earned his bachelor’s and master’s degrees from Acadia University, in Wolfville, N.S. The New Glasgow native is beginning his PhD in the forestry program at the John H. Daniels Faculty of Architecture, Landscape, and Design with a particular interest in forest insect pest management.

Under the supervision of Sandy Smith, a professor in the department of physical and environmental sciences at U of T Scarborough, and Jeremy Allison, an ajdunct assistant professor, Goodwin will be studying trap optimization for bark, woodboring, ambrosia and other related beetle species –  all considered invasive species in Canada.

Goodwin will be travelling to northern Ontario and central Louisiana to collect data and better understand the beetles' behaviour and how they interact with their environments.

Inspired by his master’s degree research, which involved the behaviour of invasive leaf-mining weevils in Nova Scotia forests, Goodwin says he wants to better understand insect behaviour to save native trees.

“Canada is big on importing and exporting and, with climate change, we can provide a home to these species who maybe couldn’t live here before and have routes to get here now,” said Goodwin.

Away from class, Goodwin was an active volunteer. He worked with with the Acadia Gameathon fundraiser, which raised money for charity, and was a volunteer co-ordinator with the Wolfville Farmers’ Market, which provides a weekly meal to local farmers. He also volunteered with the Sensory Motor Instructional Leadership Experience, where he was paired with and mentored an adult with an intellectual disability.

Getting involved in the Wolfville community enabled Goodwin to give back to a community that had given him so much.

“I was fortunate enough to have a strong support system behind me when I was beginning my journey at Acadia, but I realized that not everyone had a similar support system,” he said. “My extracurricular involvement was my way of helping those around me feel as though they belonged to a community.”

Goodwin said he is thankful to be named a fellow. “It feels good. The title is nice, for sure, and the monetary prize attached to it definitely helps in Toronto.”