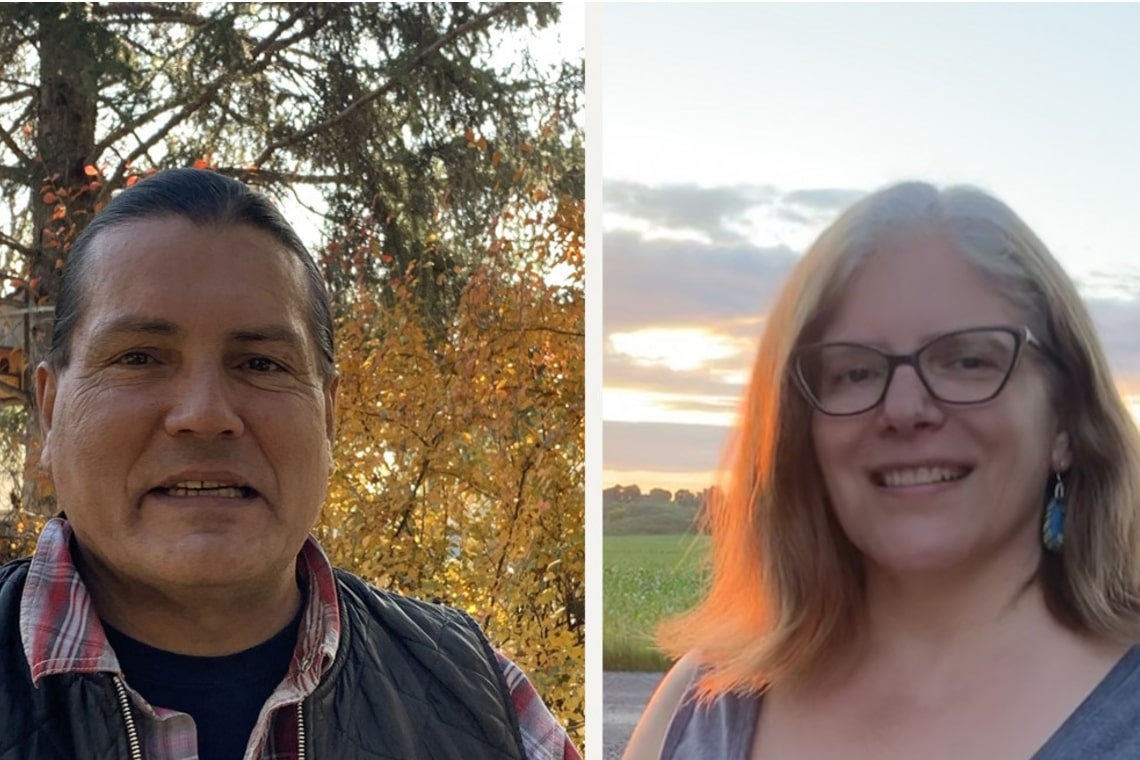 Her book of short stories The Stone Collection (2015) was a finalist for the Sarton Literary Award, and her recording A Constellation of Bones, was a nominee for the Canadian Aboriginal Music Awards (now the Indigenous Music Awards). She has also initiated many projects supporting Indigenous writers, including organizing the first Honouring Words: International Indigenous Authors Celebration Tour, an international event involving Indigenous authors from across the globe.

“I've tried throughout my adult life to give back, whether through activism, organizing events or mentoring young writers,” says Akiwenzie-Damm, who has taught creative writing and Indigenous literatures at the University of Manitoba, the Banff Centre for Arts and Creativity and the University of Victoria.

Lundy, a member of the Barren Lands (Cree/nehiyaw) First Nation in Manitoba, is an award-winning poet whose collections include Blackbird Song (2018) and Field Notes for the Self (2020). He has also published fiction and non-fiction writing, and his work has been featured extensively in anthologies of Indigenous writings in Canada.

“At my core, I am still just a boy from a small, isolated logging community in the bush of east-central Saskatchewan,” says Lundy, who recently taught creative writing and Indigenous literature at First Nations University of Canada and Campion College – both at the University of Regina.

“That place shaped me and how I see the world, and it carries a much bigger weight in my life all these years later than I once believed it would.”

He says that one of the most powerful aspects of literature – and one that may help further efforts at reconciliation with Indigenous Peoples – is its ability to expose readers to different places, people and cultures.

Similarily, Akiwenzie-Damm says literature and story-telling play a role in reconciliation by offering a way to learn about the experiences of Indigenous Peoples.

“Someone may not pick up a non-fiction book about the children’s aid scoops for example, where Indigenous children were forcibly taken from their families and placed in foster homes, but they may pick up a graphic novel about it,” she says.

“Fiction and creative storytelling have an ability to connect with readers and convey a powerful message in ways non-fiction simply can’t achieve.”

Both Akiwenzie-Damm and Lundy, who began their writing careers around the same time, say the literary industry in Canada has undergone improvements when it comes to breaking down systemic barriers. But they stress that there’s still a long way to go.

“On the one hand, there are so many more Indigenous-authored books coming out all the time,” says Lundy. “But I still see the literary institutions exercising power over the kinds of stories that get told. While this is breaking down in some ways, there are still certain kinds of stories and authors that the dominant culture seems to want.”

“There has been change, but it’s been painfully slow,” adds Akiwenzie-Damm, who created Kegedonce Press in 1993, one of the few publishing houses devoted to Indigenous writers.

“The fact that Indigenous authors have been winning major national and international awards is a cause for celebration. At the same time, I am concerned the publishing industry is only interested in particular types of books rather than real change, which means letting go of the gatekeeping during acquisition, editing, and promotions that, in effect, force Indigenous literature to the periphery.

“It also means working with us to develop new audiences for our poetry and stories.”