The transcendent value of disgust: U of T’s Jeannie Miller offers a new perspective on an Arabic scholar 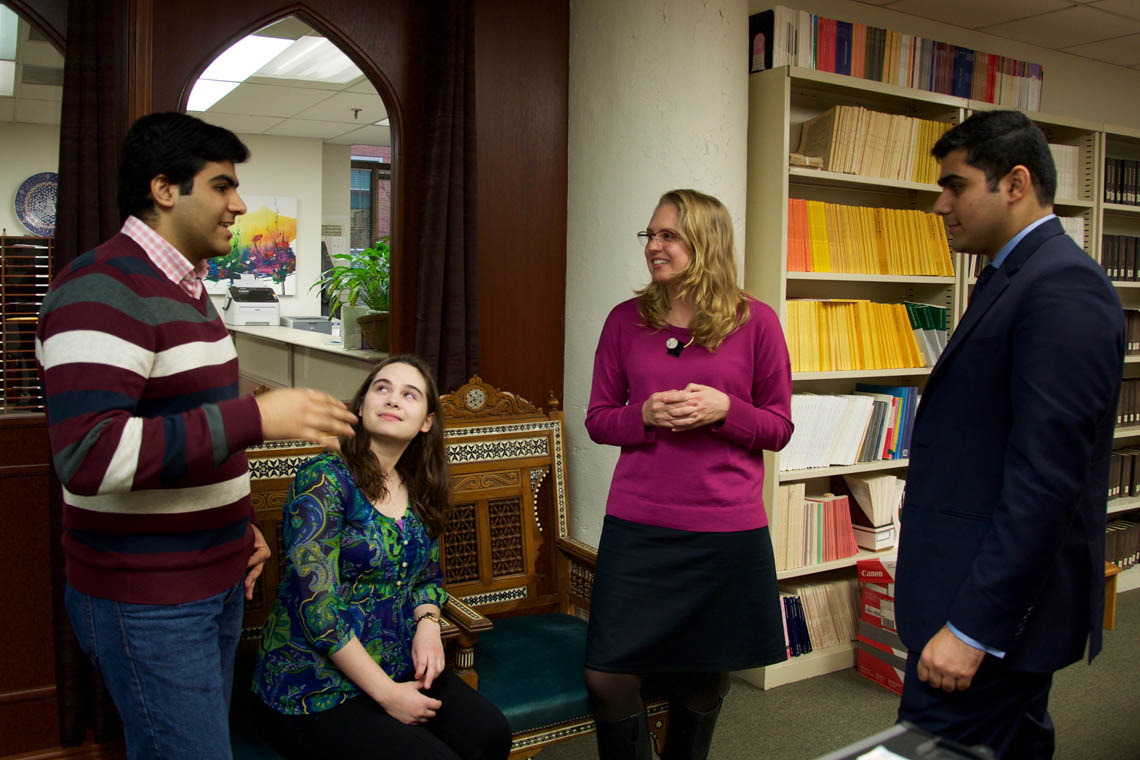 Jeannie Miller is making a big impact with a new perspective on some very old prose.

Miller, an assistant professor in the department of near & Middle Eastern civilizations, is working on a manuscript examining The Book of Animals by al-Jahiz, a ninth-century Arabic writer and polymath. Al-Jahiz  saw himself as a theologian and natural scientist, but is often miscast because of the risqué nature of some of his prose.

“He sometimes gets placed as an entertaining literary figure, as opposed to a religious thinker, which I think is wrong,” says Miller, whose forthcoming book is entitled Performative Inquiry: How Rhetoric Produced an Abbasid Natural Science.

“These things were not necessarily opposed in the ninth century. By classifying al-Jahiz that way, one misrepresents the history of Islam by removing his entertaining work from that history.”

The Book of Animals was written “in service to God,” says Miller, and partly in response to Aristotle’s biology books. In it, al-Jahiz exhibits an “exciting and very inclusive” approach to humanity. Using pigeons as an analogy, for example, he observes that there seem to be many natural forms of sexuality, including homosexuality in males and females, as well as varying preferences regarding domination.

“Much of the Book of Animals is dedicated to arguing against people who thought that exceptional people and animals were monstrous or scary. Like most intellectuals of his time, he was an elitist and did not treat everyone equally — but he did treat all kinds of people as natural results of God’s creation,”  says Miller, a former Fulbright scholar who joined the U of T faculty in 2013 after doing her undergraduate degree at Harvard University and her doctorate at New York University.

“I’ve always been interested in works that blend literature and science. For this project, I wanted to set aside modern divisions between science and literature, and between entertainment and religion, and just ask what al-Jahiz was trying to accomplish, and why he felt it had to be done this way,” Miller says. “He says his goal is to show how wondrous divine creation is, but was it really necessary to spend half a volume citing poetry about excrement and the perversions of the dung beetle?”

Miller’s book will make the case that in fact al-Jahiz did think it was necessary to examine feelings of repulsion and attraction, through poetry and rational argument, in order to fully understand the place of humans in God’s creation. “He wanted to bring together every way of knowing and understanding the world God created, including our innate reactions of disgust or pleasure.”

This was very likely a product of his exposure to the rhetorical debates practised by his theology teachers, adds Miller. “They weren’t just engaging in dialectic — they were also citing poetry, and recounting anecdotes to make points about the natural world.”

Paper had been introduced to the Muslim world around 800 AD and al-Jahiz responded to this new technological opportunity by writing large compilations as a way to preserve, defend, and theorise some of those rhetorical debate practices.

Miller notes al-Jahiz was a foundational writer in the “adab” genre, and that even though this type of writing was often full of “obscene stories and dirty jokes,” it was also often religious in nature. In fact, many adab writers were religious scholars.

“Adab texts are obscene and they are religious, and I don’t think people felt a lot of problems with that at the time,” says Miller, who studied Arabic in Ethiopia and in Syria just before the war.

Modern editions of those texts, published both by European and Arab presses, have at certain times removed passages deemed too sexual or homoerotic, but this didn’t happen to al-Jahiz, she says.

Arabic texts are worthy of being studied with the care, attention and creativity afforded English literary heritage, adds Miller, who also speaks some French, Italian, German and Hebrew.

“Just allowing English speakers access to the richness, complexity and diversity of the Arabic heritage is a small contribution to combatting Islamophobia.”