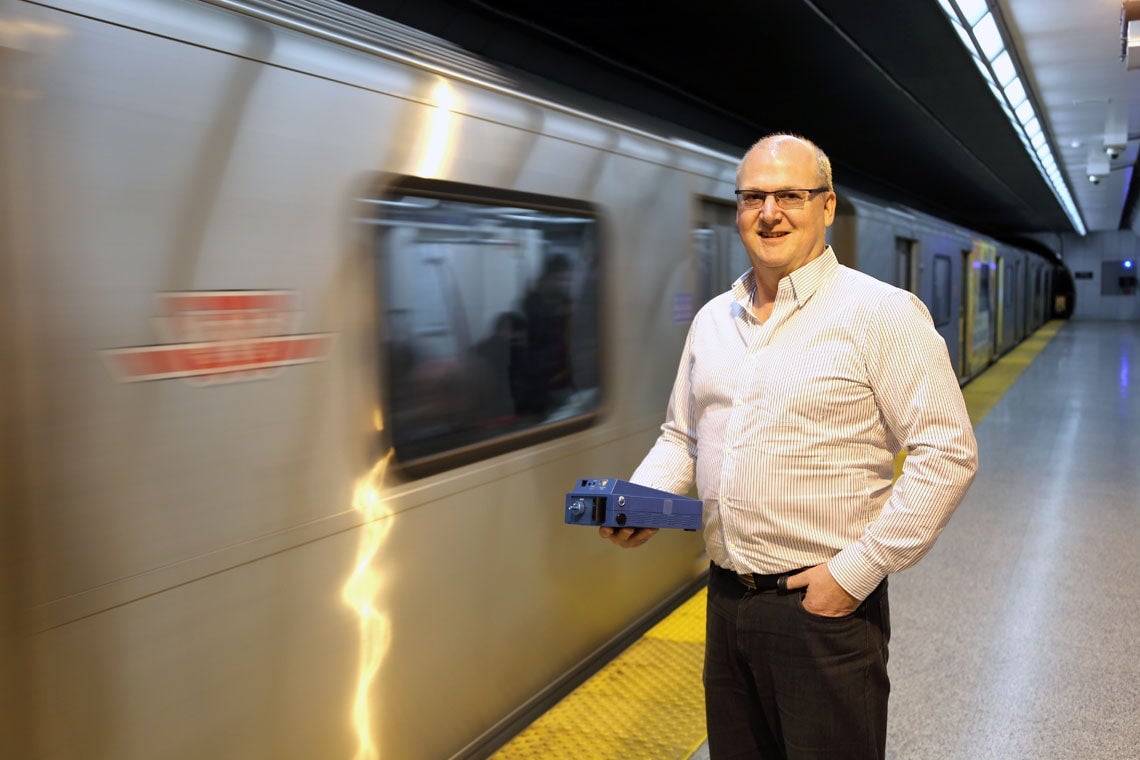 Professor Greg Evans measures air pollution on A Toronto subway platform. A new study shows that airborne particulates in such locations are much higher than in the outside air (photo by Tyler Irving)

A new study co-authored by U of T Engineering Professor Greg Evans shows that subways increase our personal exposure to certain pollutants, even as they decrease overall emissions – and that Toronto has the highest levels in Canada.

The findings come from data collected on TTC platforms and in trains over three weeks in the summer of 2010 and the winter of 2011. In collaboration with researchers from Health Canada and McGill University, Evans and his chemical engineering students used portable detectors for particulate matter – tiny particles suspended in air – and found them to be much higher than in the ambient air outside.

The team evaluated air quality using a metric called PM2.5, which measures the mass of airborne particles smaller than 2.5 micrometres per cubic metre of air.

“While larger particles get caught in your nose or throat, these ones can make the twists and turns to be able to get deep down into the lungs,” says Evans.

For comparison, a typical human hair is 50 to 100 micrometres wide.

But on Toronto subway platforms and trains, the team measured an average value of 100 micrograms per cubic metre.

“That’s comparable with a typical day in Beijing,” says Evans. The results are published today in the journal Environmental Science & Technology.

On the street, combustion sources such as cars and trucks are the dominant contributors to PM2.5 levels. But subway trains are electric, so the particles in subway stations must be coming from a different source.

“We know from analyzing the composition of the particles that it’s not just everyday grime,” says Evans. “The metal concentrations are very high, and the ratios of manganese to iron are similar to what you see in steel.”

This composition suggests that abrasion between the wheels and track of the train is grinding off tiny steel particles. As each train comes into the station, it pushes a column of air in front of it, which stirs up these particles along with any other dust settled at track level.

In above-ground stations, such as Rosedale and Davisville, the team found that PM2.5 measurements were about half what they were underground. Vancouver’s Skytrain system, which is primarily above ground, also had much lower average PM2.5 values at an average of 17 micrograms per cubic metre. Montreal’s system, while entirely below ground, averaged 36 micrograms per cubic metre, which Evans says may be because its rubber wheels, concrete rails, and wood-based braking system leads to less abrasion than steel-on-steel.

Long-term exposure to PM2.5 pollution has been associated with negative effects on the respiratory and cardiac systems, and short-term exposures to high levels can aggravate asthma or trigger heart attacks. Current Health Canada guidelines recommend that indoor PM2.5 levels be kept “as low as possible,” and at minimum, lower than the outside air.

Evans points out that these findings must be taken in context. Most commuters only spend about an hour or so on the subway each day, which means that its impact on overall daily exposure is limited. “Taking transit only increases a given daily overall exposure by 20 per cent,” says Evans.

By contrast, the outdoor PM2.5 level can vary day to day by much more than 20 per cent simply due to the weather.

“The comparison between the three subway systems shows that this is a preventable exposure and we should take steps to reduce it,” says Evans. “These particles may also be more toxic than typical outdoor particles due to their high metal content.”

“The findings are similar to previously published studies conducted in metro systems across the world,” says Keith Van Ryswyk, scientific project coordinator at Health Canada’s Air Health Science Division and lead author of the study. “The results from the study can be used to help guide transportation planners in Canada to improve air quality for commuters.”

Evans says exposure could be reduced by upgrading ventilation systems and cleaning up the dust that may be the source of the particles. He points out that his measurements were taken before the introduction of new train cars on Toronto’s Line 1, the Yonge-University-Spadina line, in 2011. These new cars may already be reducing exposure through better braking systems and improved air filters, although those studies have not yet been done.

In the meantime, Evans says he will continue using subways for his daily commute, at least when biking is not an option.

“Public transit offers the advantage of better air quality overall across the city,” he says. “This isn’t enough for me to stop taking the subway, but at the same time, we should try to reduce our exposure.”