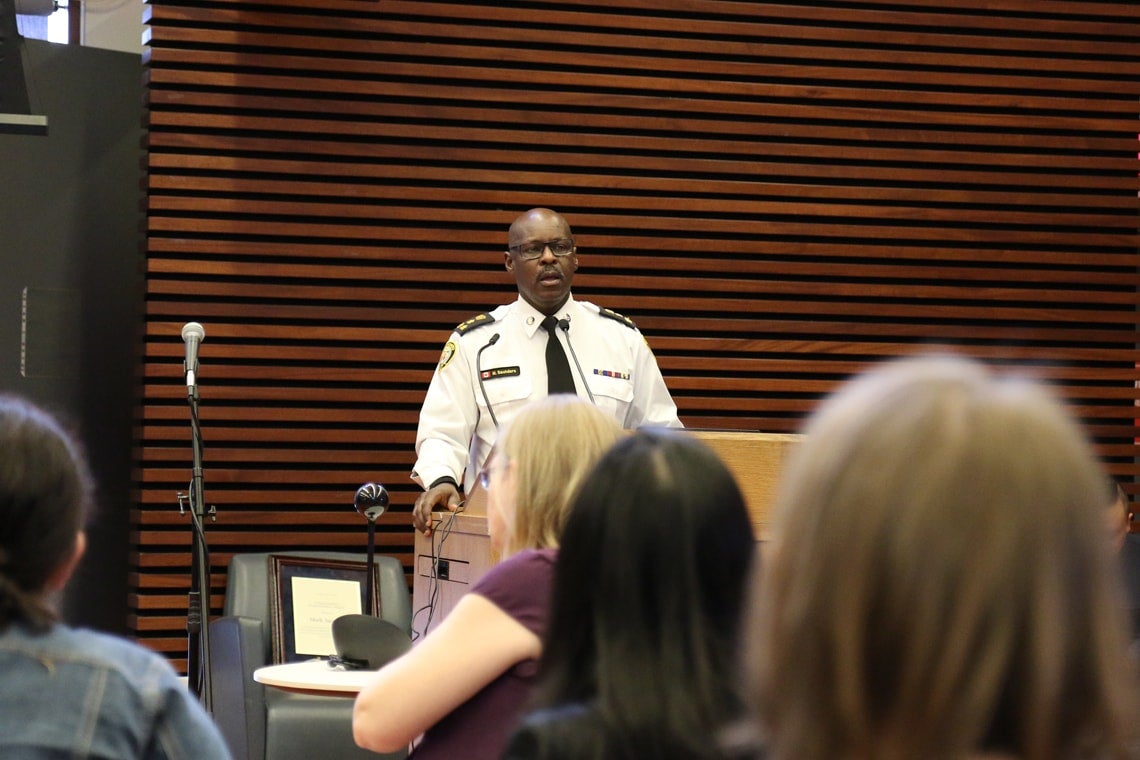 Police Chief Mark Saunders told U of T faculty, staff and students that change will take place in the Toronto police force, but it will be gradual.

“When I'm talking to my men and women, I tell them it's not like the scene in The Matrix where you get the blue pill or the red pill and away you go,” he said during U of T's Black History Month Luncheon. “It doesn't happen that way. It's going to take a long period of time to do certain things.”

During the annual event organized by the Division of University Advancement and the Black History Month Organizing Committee, Saunders talked about modernizing the police force as well as challenges like carding.

“The old methods of policing aren't necessarily the best methods or the right methods in today's environment,” Saunders said at the luncheon, held at U of T’s Woodsworth College.

Saunders was invited to speak at the event, and he took the opportunity to talk about this week's release of a report aimed at improving and modernizing the police force. It was authored by the Transformational Task Force, which he co-chairs alongside Andy Pringle, chair of the Toronto Police Services Board.

The task force found that Torontonians were interested in issues around transparency, accountability, trust, inclusiveness and affordability but were also keen on creating closer ties between the police force and the communities they serve.

“We're good at what we do, but sometimes what we do doesn't really identify or isn't defined as public value,” said Saunders. He added that the police force is hoping to create “more value and...stronger relationships right across the city.”

When asked about the controversial practice of carding, he said that it’s a unique issue.

“If you define carding as the random stopping and gathering of information of people, I do not support that. That is unlawful policing,” said Saunders.

But when a person is approached for the purpose of gathering information regarding a specific crime, it’s lawful, he said

“When we used it in an intelligence-led way, it was enhancing community safety. It took us a while to learn this,” said Saunders, adding that this is now the standard practice for police information gathering.

Saunders said the Toronto police have come a long way in the 34 years he has been a part of the force.

“When I got on, the thought of becoming a sergeant was an impossibility because the very few black people that joined the service before me – and I do mean very few – had made it very clear that I didn't fit a certain demographic for promotion.”

As a black police chief, Saunders said he brings a different perspective to the job.

“As early as six months ago, I had an incident south of the border where it was definitely a racist encounter,” he said. “The fact that I am black, I come with a different lens. I've lived a different journey. I've experienced different things,” he said.

He hopes his journey can inspire young people to follow their ambitions.

“If I can serve as a role model, that's a bonus package,” he said. “If I have the ability of giving anyone hope, then I'm proud of that. I think that gives me an opportunity to represent myself to the best of my ability so that others can be inspired to be whatever they want to be.”