Too upset to stay engaged? U of T researcher explores the link between negative emotions and political activism 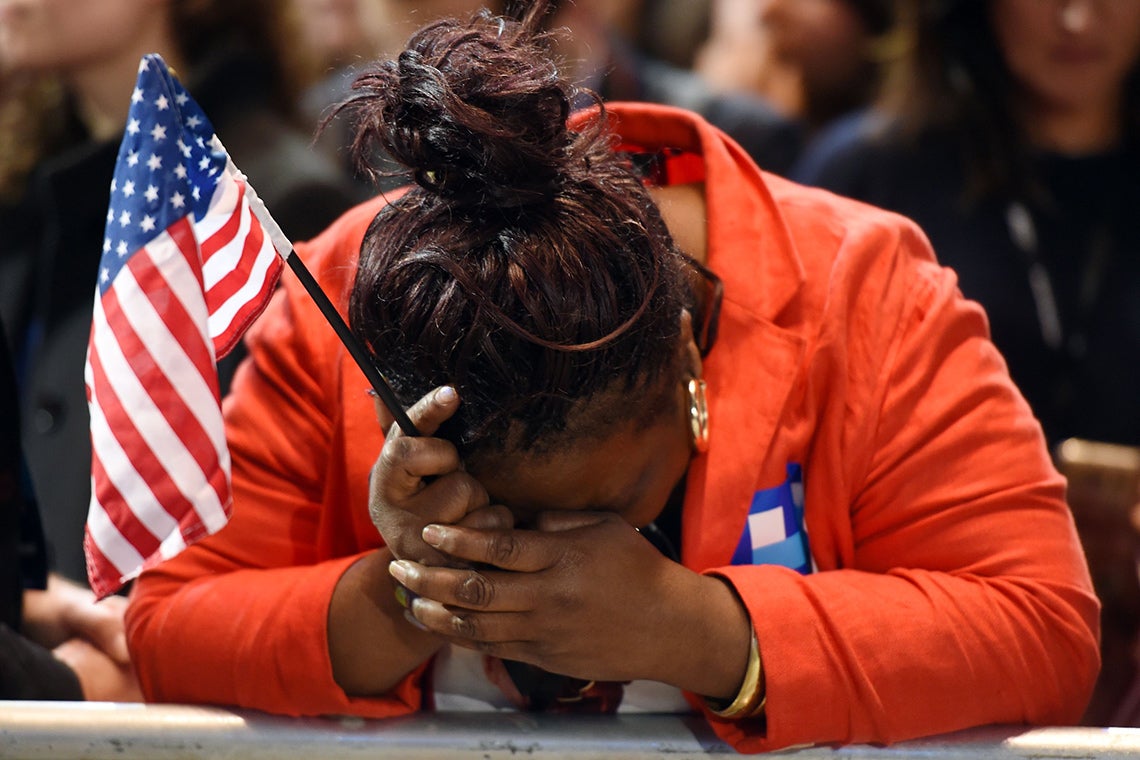 U of T study looked at people who voted for Hillary Clinton in the 2016 U.S. election and found they were less likely to be politically active if they took steps to manage their emotions (Don Emmert/AFP/Getty Images)

When you confront upsetting political events, like a new policy you find immoral or the election of someone you dislike, it goes without saying that you will experience negative emotions.

But new University of Toronto research finds that when we manage those emotions, we can end up being less politically active – meaning we're less likely to do things like contact government officials, attend rallies, or donate money and time to political organizations.

This research explores an interesting dilemma: negative emotions can be a powerful motivating force in spurring political action, but we also attempt to rein in those emotions in order to restore our well-being. The result is that we may feel better, but we’re less likely to take political action to address the problem itself.

“There seems to be a trade-off,” says Brett Ford, an assistant professor in the department of psychology at U of T Scarborough and lead author of the research published in the Journal of Personality and Social Psychology. “Negative emotions motivate us to take action, but negative emotions don’t feel good, so we’re naturally motivated to find ways to avoid feeling them.

“When we reduce these feelings in the short term, it can come at the longer-term cost of being less politically active.” In her research, Ford (left) and her co-authors explored the effect of one common strategy people use to manage their emotions called cognitive reappraisal, which is essentially reframing or reinterpreting a negative event in order to feel better.

“There are many ways to use reappraisal, but the key to reappraisal is that people have found a way to think differently about the situation in order to feel better. Some people may rationalize that it’s not that bad and it won’t last long, or maybe they think they’ll find a community of like-minded individuals to pull through a difficult time together.”

A series of six studies explored this effect among those who voted for Hillary Clinton in the last U.S. presidential election.

One found that when people used reappraisal to manage their emotions, they were less likely to donate money to a political cause, to volunteer their time, and to take part in demonstrations and protests. Meanwhile, other studies found that those who used reappraisal to manage their emotions about politics were less likely to consider taking political action in the future.

“These studies came to the same conclusion: those who use reappraisal felt better, but were less likely to be motivated to get involved and try to change the system that upset them in the first place,” says Ford, whose lab focuses on the effects emotions can have in making people sick or in helping them thrive.

So what can people do to feel better emotionally, but stay politically engaged?

Ford says there may be ways to promote action that don’t necessarily rely on negative emotion. It could mean working in a larger group that values engaging in political action to address a common goal, or it could involve cultivating positive emotions like hope or compassion in order to confront negative political events.

It may also involve a balance of using reappraisal to get through the day and yet staying in touch with one’s negative emotions to keep motivated. Future research may be able to figure out what combination is best for certain individuals.

Ford says it’s important to recognize that negative emotion can be a powerful motivating force in getting people to be politically active. She uses the example of students affected by the Marjory Stoneman Douglas High School shooting in Parkland, Fla. who publicly said they wanted to stay angry in order to maintain their motivation to spur political change related to gun control.

“It can be a good thing to ‘stay mad’ but there can also be costs associated with that because it’s a heavy burden to stay mad over a long period of time,” explains Ford.

The cognitive strategies people use to reduce negative emotion may also help explain why citizens in a democracy seem apathetic. Ford says that much has been made of U.S. citizens being less engaged politically, but it’s important to understand the underlying factors that may be keeping people out of the loop.

“Our research suggests that perhaps people aren’t getting involved not simply because they’re apathetic, but because they’ve found a way to protect their emotional well-being, which is also an important goal in distressing times,” she says.

“People need to make decisions that are right for them, but it’s also key that we understand the consequences of those decisions.”