Too harsh or not harsh enough? U of T researcher unpacks World Anti-Doping Agency's Russia ban 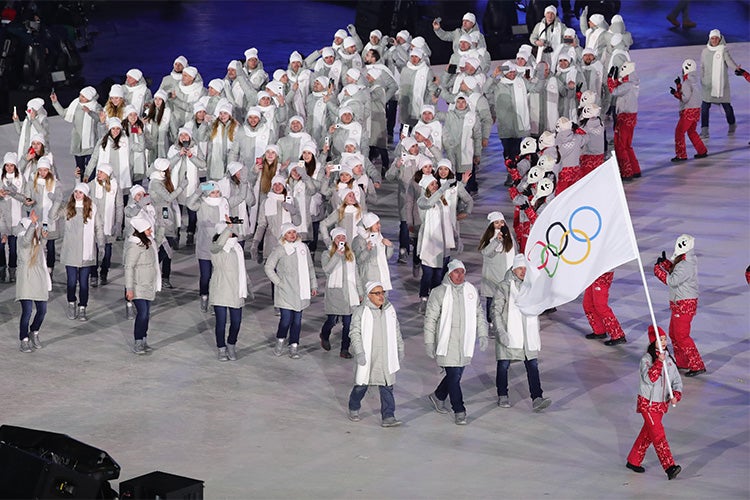 Russian athletes competed under a neutral flag at the 2018 Winter Olympics in Pyeongchang, South Korea, following a ban on Russia's participation by the International Olympic Committee (Michael Kappeler/Picture Alliace via Getty Images)

In its most severe sanctions yet, the World Anti-Doping Agency (WADA) has voted to ban Russia from international sport for four years. As a result, Russia is banned from participating at next summer’s Olympics in Tokyo, the Beijing 2022 Winter Olympics and the 2022 soccer World Cup in Qatar.

The latest ban on Russia was imposed after Moscow was found to have planted fake evidence and tampered with laboratory data it handed over earlier this year. Russian President Vladimir Putin said earlier this week that Moscow has grounds to appeal the decision.

Peter Donnelly, a professor of the University of Toronto’s Faculty of Kinesiology & Physical Education (KPE), specializes in sport policy and politics. He recently spoke to KPE’s Jelena Damjanovic about the latest in the scandal to engulf Russia’s sport apparatus.

What’s your take on WADA’s decision? Has it gone too far, or not far enough as some critics are implying?

Since it is almost impossible to directly penalize those most responsible for the widespread state-sponsored doping that has occurred in Russia – the sports officials and administrators, the politicians, the physicians and pharmacists, the coaches, and the FSB (Russian Federal Security Service) who enabled the on-site doping manipulation at the Sochi Olympics – then I think WADA's decision may be the best possible outcome.

Some Western athletes and a number of national anti-doping agencies have been calling for harsher penalties such as a blanket ban on Russian participation in international sport. But collective punishments are always problematic. They are always a sign that those assigning the penalties are unable to distinguish who is guilty and who is not, so they punish everyone.

From an athletes’ rights perspective the rights of “clean” athletes outside of Russia are of primary importance. Many of them have lost medals and related opportunities because they lost to athletes who had an unfair advantage through doping. They have a right to know that – although a completely level playing field is impossible, particularly in terms of the athlete training and development in high-income countries versus middle- and low-income countries – their competitors are not cheating. But it is also important to consider the rights of Russian athletes. Of course, there will be some who embraced and benefited from the state-sponsored doping system. But many who refused to participate in the doping program will have been dropped from the Russian high performance program and lost a chance for a career as an international athlete. And many others will have been pressured to take drugs against the threat of being dropped from the high-performance program – a decision not taken lightly by athletes who have spent years developing their strength and skills in order to achieve national team status.

The decision to permit “clean” Russian athletes to compete internationally is controversial, but to penalize them collectively with those involved in the doping program would have been an even worse decision.

Russian Prime Minister Dmitry Medvedev blamed the decision on anti-Russian hysteria. Do you think there’s any truth to that?

It's always interesting to hear guilty parties playing the victim card. On its past record, I suspect WADA would not have imposed such an extensive ban on Russia's participation in international sport. But WADA has been under a great deal of pressure to impose significant penalties on Russia, not only for the state-sponsored doping program, but also for its failure to take responsibility for cheating or any meaningful steps to eradicate doping in Russia. That pressure has come from international athletes, athletes' organizations, national anti-doping agencies and international sport federations such as the International Association of Athletics Federations (now World Athletics). And that pressure accounts for the decision, not anti-Russian hysteria.

Russian athletes will have to have a “biological passport” that indicates normal levels of chemicals in their blood; they will have to have passed doping tests at all international competitions where they have competed and their names must not have appeared on the state-doping records obtained by WADA. They are likely to be monitored for doping even more closely than other athletes. This is not a foolproof system, especially since the current penalties against Russia were incurred because of evidence that so many of the RUSADA (Russia Anti-Doping Agency) records were destroyed.

Russia can appeal the sentence to the Court of Arbitration for Sport. What are the odds of CAS overturning WADA’s decision?

As Sean Ingle wrote in The Guardian, “Who knows what CAS will decide? But we can say this for certain: Its legal judgments often wrong-foot perceived wisdom."  Although CAS is presumed to be in independent body, there are some concerns about its decisions because it is funded by the International Olympic Committee. And the IOC has been most reluctant about bans on Russian sport. I suspect that if CAS modifies or overturns WADA's decision, international sport may not be able to manage or control the outcry from international athletes and national anti-doping agencies from across the world.