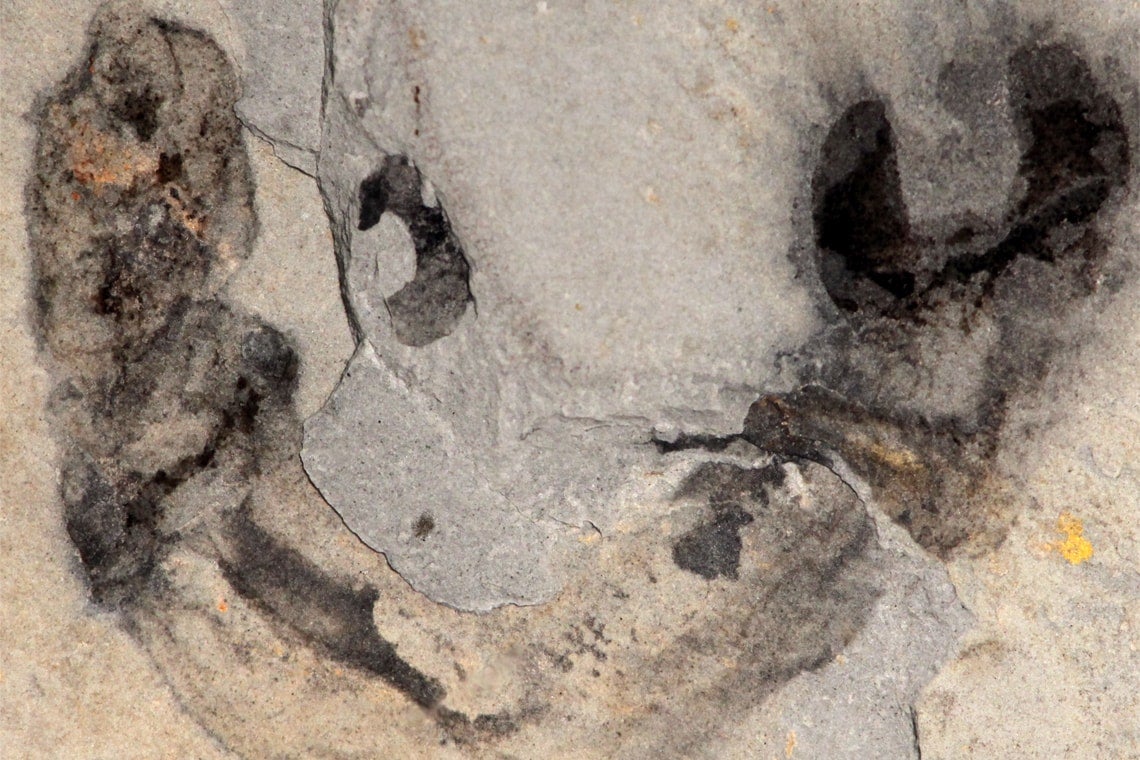 Oesia disjuncta: the worm shaped animal would have lived inside a porous tube, and used its “U”shaped structure to attach itself in place within the tube. (Photo by Jean-Bernard Caron)

But do we have a common ancestor with this tiny, solitary builder?

They looked like fossils of seaweed – but experts now say they were homes made by a creature called Oesia, which lived an isolated existence inside them about 500 million years ago.

Researchers from Canada and the UK say the fossils – originally believed to have come from a type of seaweed called Margaretia – are the vestiges of tubular structures which protected these ancient worms. Long, perforated tubes, they likely looked like narrow chimneys reaching up from the sea bed. Gaps in the structures allowed the tiny worms to feed without leaving their one-room homes.

Experts from the Universities of Toronto, Cambridge and Montreal and the Royal Ontario Museum in Toronto collaborated on the study, published in the journal BMC Biology.

A distant ancestor common to all deuterostomes, from sea worms to humans?

Part of its importance is that it confirms Oesia was a primitive specimen from a group of creatures called hemichordates. These belong to a bigger group called deuterostomes, of which vertebrates (including humans) form a separate branch.

By finding out more about these early creatures, researchers hope eventually to be able to identify and characterize a distant ancestor common to all deuterostomes, from sea worms to humans.

In particular, the research supports the increasingly common view that this ancestor was probably a “filter feeder”, which ate by sucking in water and straining out nutrients. Oesia was one such filter feeder, with gills down most of its body to expel water afterwards, and holes in the walls of its tubular home to let the water in and out.

Karma Nanglu ( picured below) is a PhD candidate in the department of ecology and evolutionary biology at the University of Toronto and the study’s lead author.

“Hemichordates are central to our understanding of how deuterostomes evolved,” Nanglu said. “Through them, we can get clues about the anatomy and lifestyle of the last common ancestor that we all share, and this adds further evidence to the hypothesis that the ancestor was a filter-feeder like Oesia.” 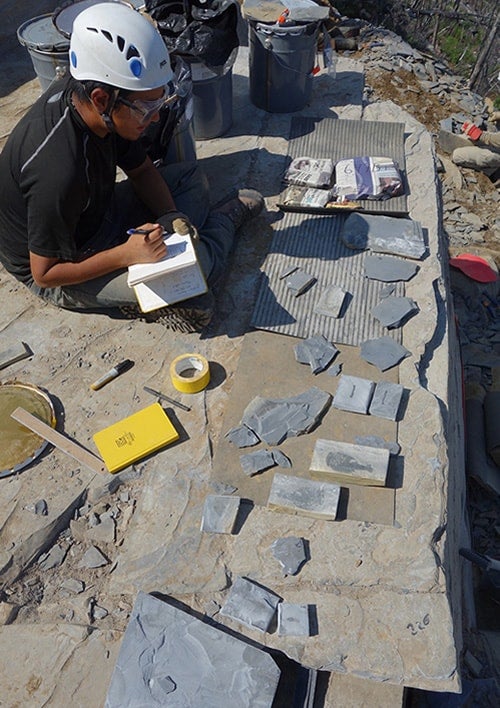 (Above: Nanglu with fossils freshly excavated from the Marble Canyon quarry site for identification, recording, and shipping to the Royal Ontario Museum/ photo: Jean-Bernard Caron)

Professor Simon Conway Morris, from St John’s College, University of Cambridge and a co-author, said, “Oesia fossils are pretty enigmatic — they are very rare and until now we could not prove which group they belonged to. Now we know that they were primitive hemichordates — perhaps the most primitive of all.”

The study was possible thanks to the discovery of a rich source of fossilized remains near Marble Canyon, in the Canadian Rockies (Kootenay National Park, B.C.).  Parks Canada, which holds jurisdiction over this and other Burgess Shale sites, said, they were “thrilled” by the discovery and “eager to share this exciting new piece of the ever-unfolding Burgess Shale story with visitors”.

“Marble Canyon is one of the most recently discovered fossil localities in the Burgess Shale, a geological formation known for its exceptional quality of fossil preservation,” said co-author Jean-Bernard Caron, senior curator of invertebrate palaeontology at the Royal Ontario Museum and associate professor in U of T's departments of Earth sciences and ecology and evolutionary biology. Caron led the research team that discovered Marble Canyon in 2012.

“Oesia has been known from an older Burgess Shale site for over 100 years, but the specimens from Marble Canyon are far more abundant and better preserved, giving us unprecedented details of the animal’s internal anatomy.”

Marble Canyon is located 40 kilometres south of the original Burgess Shale fossil locality in Yoho National Park, British Columbia. Parks Canada, who protects and manages Burgess Shale sites located in Yoho and Kootenay national parks, celebrated the discovery as another chapter in the ever unfolding Burgess Shale story with their visitors.

The research establishes that Oesia was similar to modern acorn worms with a proboscis, a collar, and a long trunk. Co-author Christopher B. Cameron, associate professor at the Université de Montréal added that, “Acorn worms are notoriously sparse in the fossil record. Only a handful of fossil species having been described, making the recognition of such an ancient representative of the group particularly noteworthy.”

The average Oesia was about 53mm long and rarely more than 10mm wide. Unusually, these worms had U-shaped gills running down most the length of their bodies to enable filter feeding. Gill slits seem to be a characteristic common to all deuterostomes; even humans have slits in their necks at an early stage in their embryonic development, and this is seen as evidence that all deuterostomes are related to a distant, common ancestor.

Oesia must have lived in tubes

The researchers realised that Oesia must have lived in tubes because among the Marble Canyon finds there are dozens of examples where the fossil remains of the worm are found within those of Margaretia.

Since the 1920s, Margaretia has been classified as a type of algae, albeit one unlike any other known species from this period in prehistory. The direct association with Oesia explains why Margaretia looks so exotic: This was no seaweed, but rather a perforated tube-like structure that the worm inhabited.

“A solitary mode of life”

The study suggests that in some cases these structures exceeded 50cm in height and that they were typically at least twice the width of the worm, giving it plenty of room. The ends were sealed off, making life inside a rather lonely experience. “Only single worms are found within tubes, suggesting a solitary mode of life,” Nanglu added. “This gives Oesia an interesting mix of characteristics: it has the general appearance and solitary lifestyle of the modern acorn worms, but the tube dwelling lifestyle and posterior attachment structure shown by their closely related sister-group the pterobranchs.”

At some point, the fossil record suggests that acorn worms underwent a transition, leaving their tubes and instead opting for a life under the sea bed. The study argues that as evolution gathered pace and more predators appeared on the scene, digging into the sea floor may simply have been a safer option. Certainly, modern-day acorn worms have adopted this lifestyle; rather than filter feeding they live in the sediment and eat nutrients within it.

“In its own depressing way this is a story of Darwinian competition,” Conway Morris explained. “The levels of competition and predation increased, life sped up and got harder, and animals had to protect themselves more. One way of doing this was to abandon life filter feeding in a tube, and instead to dig into the sediment and eat mud. Once there, they found a new niche and were able to make a perfectly good life for themselves.” 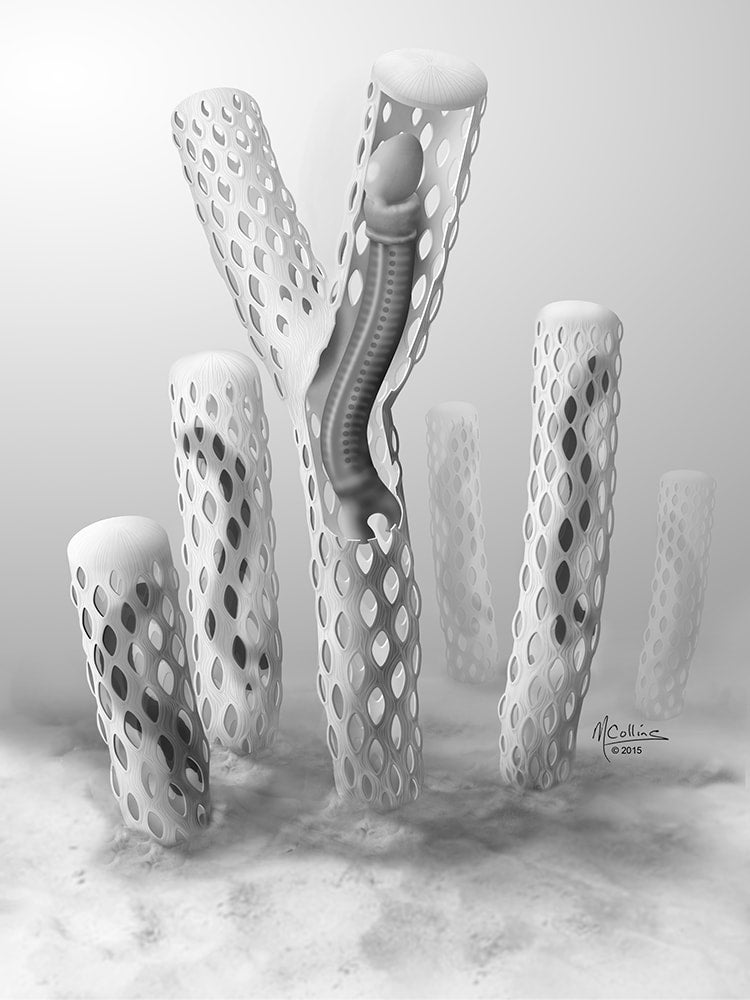