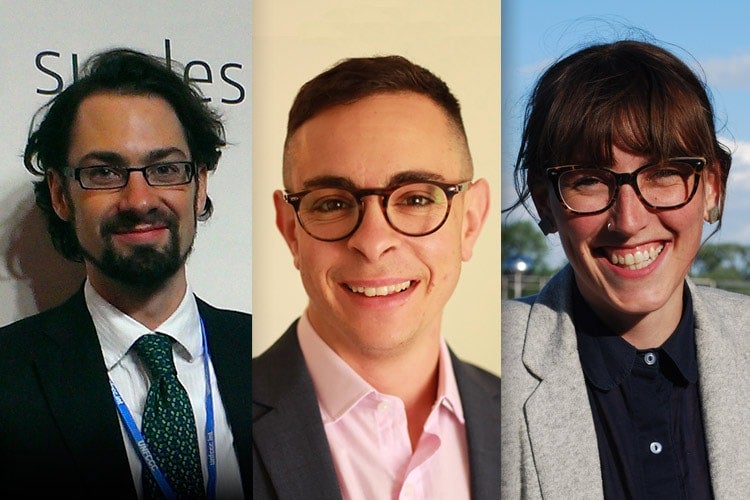 Christopher Campbell-Duruflé is researching international law and climate change. Ido Katri documents the rise of trans rights for gender self-determination. Cynthia Morinville is looking at the electronic waste crisis through the lived experiences of the workers who handle that often-toxic waste.

The three University of Toronto doctoral students are among 15 national recipients of the prestigious Pierre Elliott Trudeau Foundation doctoral scholarship for 2016. The Trudeau scholarship – regarded as the most prestigious doctoral award for the social sciences and humanities in Canada – supports doctoral students who are committed to solving issues of critical importance to Canada and the world. In addition to an annual grant of up to $60,000 over three years, the scholars will also benefit from the expertise of the foundation’s fellows and mentors.

Locke Rowe, Dean of Graduate Studies, congratulated Campbell-Duruflé, Katri and Morinville on receiving the scholarships. “These are three outstanding scholars working on issues of great significance to society. It is gratifying to see the Trudeau Foundation recognize the University of Toronto’s concentration of excellent graduate students.”

“I literally jumped with excitement when I received the phone call from the Trudeau Foundation,” recalls Campbell-Duruflé, a student in the Doctor of Juridical Science (SJD) program in the Faculty of Law.  He says the selection process was very intense: “a screening by the Faculty of Law, another by U of T’s Graduate Awards Committee, a first screening by the Trudeau Foundation followed by a video interview in February, and finally an in-person interview in March. It was hard not to be thinking about this process all the time this year.”

Campbell-Duruflé specializes in international environmental and human rights law. Besides pursuing his SJD, he is also co-chair of U of T’s responsible investment committee and an associate fellow at the Centre for International Sustainable Development Law at McGill University. Last December, he was officially accredited as an observer to the 21st Conference of the Parties to the United Nations Framework Convention on Climate Change (COP21).

He plans to use the scholarship to investigate what he sees as a shift away from sanctions and penalties towards reporting and review as mechanisms to compel states to adopt meaningful greenhouse gas emission reduction targets. “I would like to know if transparency-based approaches to compliance offer more opportunities for our engagement with the international regime, while at the same time granting adequate protection to those populations most at risk of suffering from harmful climate change.”

Campbell-Duruflé’s research supervisor, law professor Jutta Brunnee, says she was delighted with the news of the scholarship. “Christopher is deeply committed to promoting environmental protection and human welfare, and to harnessing international law to those ends,” she said. Brunnee, who is also holds the Metcalf Chair in Environmental Law, added, "He is a believer in the positive power of international law, but also clear-eyed about the many challenges along the way. His doctoral project, examining the transformations that the 2015 Paris Agreement brings to international climate law, has enormous potential and, needless to say, is impeccably timed.”

SJD student Ido Katri was happy to learn he had received a Trudeau Scholarship, not for himself, but for the marginalized communities he works with. “This is an enormous opportunity, not only for me, but for the communities I come from and I promised myself to use it to create opportunities and resources for others.”

Katri has been an advocate for the trans community for over a decade. In 2010, he founded the first transgender association in Israel, and the following year he co-founded the Gila Project for Trans Empowerment to mobilize community resources to provide legal and social assistance and to advocate for broader institutional change.

“I want to use to voice I have been given, by the University of Toronto and by the Trudeau Foundation, to bring those marginalized voices to the forefront of current and future public debates.

“By looking at seemingly unrelated issues faced by trans people, such as solitary confinement in prisons, access to identification document and the relation between law and medical technologies, I hope to formulate a critical legal analysis that would challenge accepted norms and standards.”

Katri has other research interests as well, “focused on ‘in-between’ categories of law, transformations and passing and on the relation between racial/ethnic and gender performance, specifically with respect to Mizrahi Jews (Jews who have immigrated to Israel from Arab and Muslim countries).

“I have a very broad spectrum of interests, perhaps too wide, and currently my work drives from administrative, international and family law, feminist and queer legal theory, critical race theory, affect theory, post-colonial studies, psychoanalysis and post-humanism. I am currently working on these issues within and outside academia, continuing my work as an advocate for gender variant issues with local and international players.”

“I’ve always been interested in people’s interactions with their environment,” says Geography PhD student Cynthia Morinville. But that interaction, she says, is tied up with politics. “Whenever you ask questions about environmental sustainability, you have to start with social justice and equality. Access to land and resources is at the base of all radical politics.”

Morinville is currently looking at electronic waste and its effect on the people who eke out a living handling and dismantling it. Her research seeks to shed light on the ways in which rare metals embedded in electronic devices are valued, extracted and returned to markets.

Before coming to U of T, she earned a master’s degree at the University of British Columbia, where she looked at access to water in Canada and internationally. The issue still interests her.

“I think it would be hard to not take an interest in questions of water access and governance,” she says. “Water is not only a necessary substance of life, its material characteristics are such that it constantly circulates and acts as a social connector. It’s a really interesting resource through which we can consider questions of equity, justice and environmental sustainability.”

Morinville’s supervisor, assistant professor of geography Rajyashree N. Reddy, says “Cynthia is a student of unusual promise who is deeply passionate about environmental and social justice issues. Her proposed research on e-waste will shed new light on the ethical and environmental dimensions of contemporary practices of planned obsolescence.”