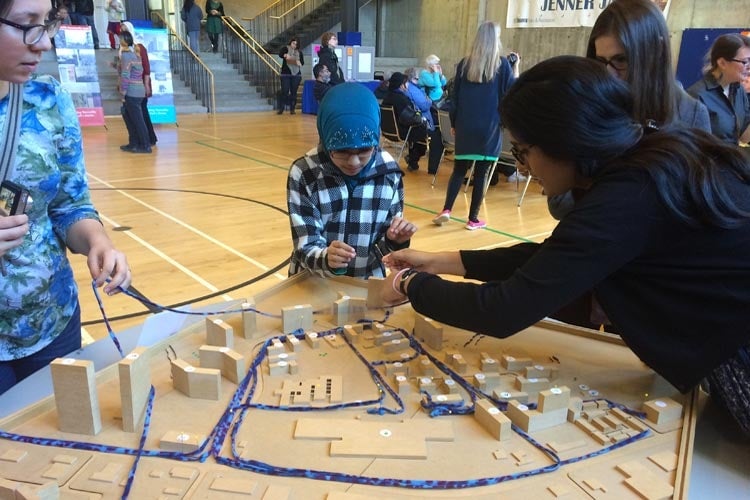 When academics write op-ed pieces in newspapers and prepare reports for municipalities, foundations and others, they face a challenge, says Aseem Inam, a visiting professor in the department of geography and planning.

“The key is how to make change happen,” he said in his office in Sidney Smith Hall. “And one of the ways is to work directly with the community itself.”

That’s why the John Bousfield Distinguished Visitor organized his Introductory Studio in Urban Design and Planning as an exercise in collaboration with the people who stand to gain the most from the process: residents.

The graduate course culminated in an interactive workshop on April 16 in the high-rise northeastern Toronto neighbourhood known as Thorncliffe Park. Eight students gave a joint, 20-minute presentation before setting up shop at tables where citizens and stakeholders could hear more about the proposals and offer ideas of their own.

“It was amazing to be a part of a course that shared our resources and made connections with grassroots groups,” said Mercedes Sharpe-Zayas, a Master of Science in Planning student.

Thorncliffe Park is a community of mostly moderate-income immigrant families with walkable spaces, accessible shopping and few of the social problems popularly equated with high-density neighbourhoods.

Not that pressures are absent: The complex houses about 30,000 people rather than the 12,000 it was designed to accommodate the 1970s. Many are children under 14. The local elementary school is one of the largest in North America.

“One of the things that make Thornciffe Park stand out is that it has a thriving local economy,” Inam said. “Except it is not made of typical bricks-and-mortar stores. People do business out of their homes. They will make food for their neighbours, make clothes, cut hair.

“What is striking is that most of these are women entrepreneurs.”

Indeed, students in the course engaged throughout the year with the Thorncliffe Park Women’s Committee as a partner in their studies.

“It is not a legal entity, it is not a financial entity,” Inam says of this collective including many immigrant mothers. “Yet they have accomplished more than most community groups.”

The committee’s hard work on a central green space called R.V. Burgess Park had already attracted the attention and admiration of Toronto’s department of parks, forestry and recreation, which supplied funding for new benches and playground equipment.

The women are now looking at making use of a vacant former Target department store and widening the overcrowded pedestrian bridge that leads to the local high school. Both ideas arose collaboratively with the U of T students.

“They understand the energy and logic of grassroots and have endless imagination and creativity,” said Sabina Ali, chair of the committee.

The Target reboot as rendered in a full-colour booklet transforms part of a cracked and empty parking lot into a green space and patio. As for the abandoned big-box store, it holds a community meeting space, after-school centre, roof garden and marketplace.

This last element is an expression of the “informal economies” that Inam says are accepted everywhere even if they do not always meet the letter of the law. “When you say something is not legal, people here say, ‘That’s terrible,’” Inam commented. “But in other parts of the world, where open-air markets are common, they say, ‘Isn’t that nice?’”

Another proposal is to change zoning regulation to permit small businesses to operate in residential areas. This would also make possible night markets of the type that sprout regularly afterhours in China and Hong Kong.

The benefit is partly psychological. “In many of these neighbourhoods there is a safety perception problem,” Inam said. “Well, you put up lights and have people come out, with eyes on the street.”

Among the more surprising innovations discussed at the workshop was a “pop-up café” fashioned from that pillar of international commerce, the shipping container.

“My students said this is how you could do it: Cut open one wall, have a little kitchen, have some stools and a seating area outside. By visualizing it, people got really excited.”

Among those impressed by the ideas that emerged from the yearlong course are Don Valley West MP Rob Oliphant, Toronto City Councillor Jon Burnside and Silvia Fraser from the City of Toronto’s Tower and Neighbourhood Revitalization Unit. All were present at the workshop.

Kelsey Carriere, another MSc/planning student, was struck by the “fearless sense of possibility” shown by young people at Thorncliffe Park. Their enterprise and commitment shows in a new bicycle repair service.

Inam, an associate professor of urbanism at the Parsons School of Design of The New School in New York, hopes to return to the neighbourhood as a professional consultant. His students developed a personal commitment to Thorncliffe Park and its people. One senses in conversation that Inam did too.

“They use networks and make things happen,” Inam said of the Women’s Committee. “They go to the city, they reach out to the property owners. They mobilize people.

“You meet them and they are gentle and softspoken. But they are powerhouses. They are very persistent. They try something. If it doesn’t work, they try again next year.”