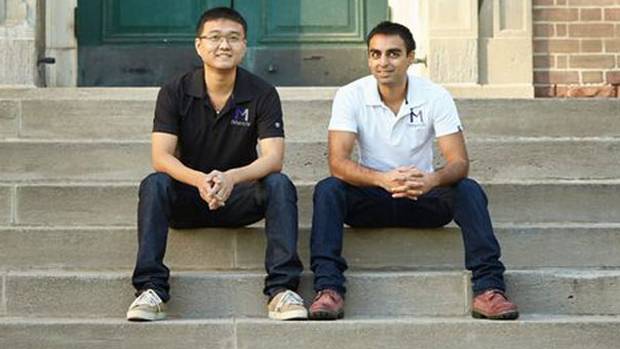 Bin Liu, left, and Arjun Mali started a tech business aimed at helping the visually impaired, just one of the many startups that have received support from the Impact Centre at the University of Toronto. (Thomas Bollmann)

When Bin Liu first approached the Impact Centre – the University of Toronto’s accelerator for startup tech companies – he had little more than, as he describes it, “the stereotypical drawing on a napkin.”

Liu, whose father has glaucoma, dreamed of developing technology to help the visually impaired.

“I was kind of idealistic,” he admits, “because most people who apply to the Impact Centre are PhD or master’s students with some form of research already done.”

Nonetheless, Liu, who is 25 years old and holds a bachelor’s degree in civil engineering, managed to convince the Impact Centre’s director, Prof. Cynthia Goh, to give him a chance.

Two years later, in 2014, Liu co-founded his own company, Toronto-based iMerciv Inc. His “dream” has since evolved into a wearable ultrasonic sensor device, dubbed the BuzzClip, currently in the process of being sold and distributed in Canada and the U.S.

Liu didn’t do it alone. He called up his friend Arjun Mali, 26, who had a degree in economics.

“Finance isn’t my strong suit,” Liu says, “so I thought Arjun would be a great fit.”

As it happened, Mali’s family had also been longtime supporters of an orphanage for the blind in India, which made the match even better.

That kind of successful cross-discipline teamwork is what the University of Toronto hopes to cultivate in a big way, as it ramps up its efforts to spread innovative and entrepreneurial thinking across its three campuses.

Already, the university is a leader in that respect, offering more than 60 courses with some element of entrepreneurship, as well as supporting accelerators, such as the Impact Centre, that are geared at helping startups.

In the past, however, the focus has primarily been on science and engineering. Now, U of T wants to widen that lens to take in all of its academic areas.

The reason is simple. Given the realities of the 21st-century job market, students need to be able to think creatively and know how to market themselves and their ideas.

“Entrepreneurial thinking is becoming increasingly important as a life skill,” says Dr. Derek Newton, U of T’s Assistant Vice-President, Innovation, Partnerships and Entrepreneurship. “When students have had an entrepreneurial experience, it certainly increases their employability and their impact as they go out into the world.”

Dr. Newton says that even big business is calling for “intrepreneurs” – employees who bring enterprising and “outside-the-box” thinking into the corporate environment.

Prof. Goh, who founded the Impact Centre and is U of T’s pioneer in entrepreneurial education, says courses in the subject have been wildly popular ever since she launched her first one, a non-credit seminar, in 2004.

Initially a physical chemist who started her own company – the first of many – to market her research two decades ago, Prof. Goh has since made it her goal to help students do the same. Now, as the inaugural academic director for University of Toronto Entrepreneurship (formerly the Banting & Best Centre for Innovation & Entrepreneurship), she’s charged with encouraging other areas of the university to adopt an entrepreneurial component. “My goal is to reach at least a third, if not more, of the U of T student population. That’s about 35,000 people,” she says.

According to Prof. Goh, the same thinking required for a tech startup can be applied to the social sciences and the humanities. “If you are [a writer], for example, in the end, you have to think of yourself as a business,” she says. “You have to market yourself. You have to learn how to sell your story.”

Prof. Goh also wants to see more students from different academic streams merge their talents in the manner of Liu and Mali. The university is already beginning to see that with its undergraduate Innovation and Entrepreneurship course. Of its 500 students, some 60 per cent come from the sciences, and the remainder from other areas of study.

Prof. Goh  views the U of T’s entrepreneurial initiative as a wise investment – a way to take the $1.2-billion the university and its partners spend annually in research and to translate it into student-run companies that will use that research to build a better world. And for students outside the research stream, the benefits are there as well.

“The role of the university is guiding students to be successful at whatever path they choose,” Prof. Goh says. “Entrepreneur training and innovative thinking are tools to help them be the best that they can be.”