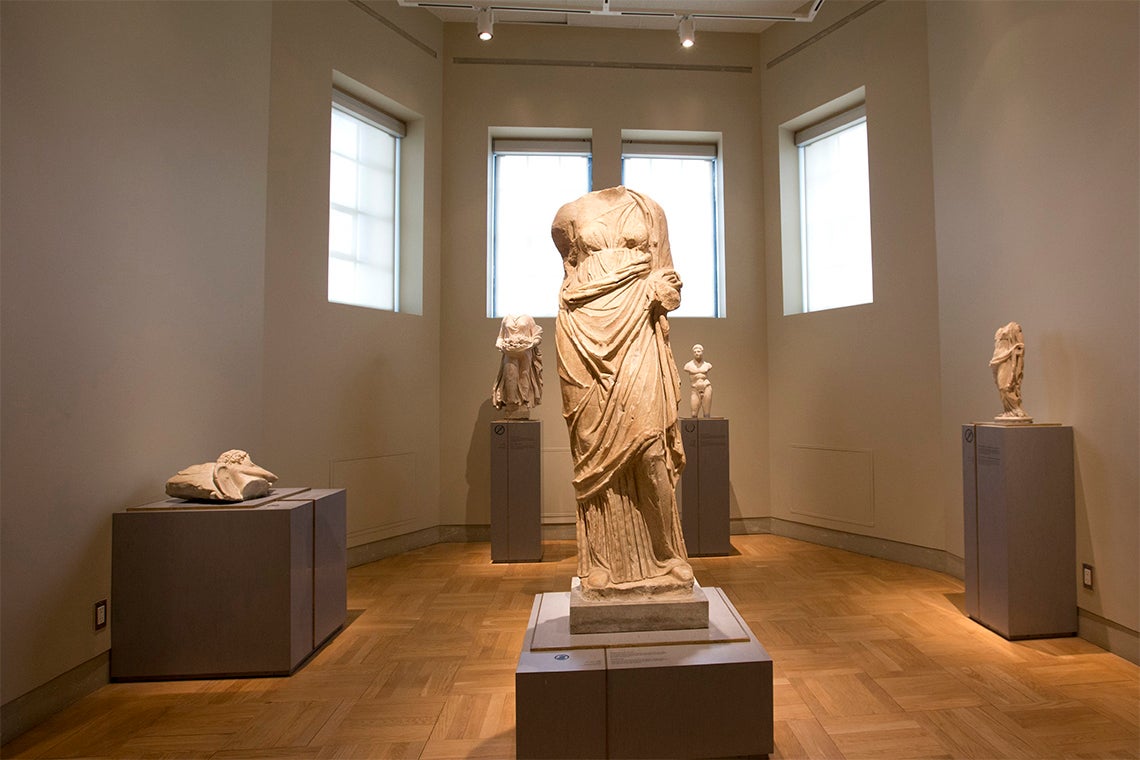 The Royal Ontario Museum is one of several museums students will visit virtually in Erin Vearncombe’s course on Museums and Material Religion, which explores objects and their meanings (photo by Keith Beaty/Toronto Star via Getty Images) 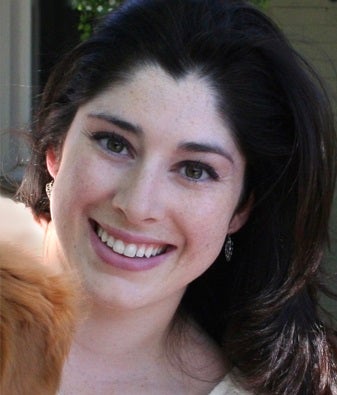 University of Toronto students taking Erin Vearncombe’s course on Museums and Material Religion are set to learn all about the world of “things” – and how they shape us.

With a focus on museums and their collections, Vearncombe hopes students will begin to look more crticially at objects, what makes them meaningful and who gets to decide their meaning.

Vearncombe earned her PhD from U of T’s department for the study of religion in the Faculty of Arts & Science and was a lecturer at Princeton University for five years before returning to U of T as a faculty member.

An assistant professor, teaching stream, in the Faculty of Arts and Science’s Writing-Integrated Teaching (WIT) program, Vearncombe develops resources to support undergraduate writing and communication – and is co-authoring a book for HarperOne called  After Jesus Before Christianity on early Jesus communities in the first two centuries CE.

Nicole Bergot of the department for the study of religion recently spoke to Vearncombe about her new course what students can expect.

Can you give me an overview of the course?

At its core, this course considers our human interactions with things. We are profoundly shaped by the things around us. We may think we’re above the world of things, but, really, things influence us every day in ways of which we’re not even conscious. Things have their own lives: past, present and future. We’ll be considering “thing theory.”

What is thing theory?

Thing theory is based on the premise that humans don’t just create and use things – things create and use us, in big and small ways, too. Things allow us to do things – and they prohibit us from doing things. For example, if you look at the corset, which so many women had to wear throughout history, the corset as a thing actually changed the shape of human bodies in a permanent way. The corset limited what women’s bodies could do in space; they made it hard to breathe, you couldn’t do anything active, you couldn’t go for long distances – the corset created women in a lot of different social ways.

Things can even create human social and moral values. They can facilitate social transformation.

For example, a fabric called barkcloth, or “tapa,” has been – and continues to be – a very important part of sacred celebration in Polynesian cultures. When the London Missionary Society travelled to the region at the end of the 18th century to gather Christian converts, they encouraged Samoans in particular to adopt a form of Tahitian tapa garment called a “tiputa,” referenced as a “poncho” by missionaries.

The wearing of the tiputa was not meant to give an outward sign of an inner conversion, but rather, in a really important sense, to actually bring about conversion. The tiputa facilitated an embodiment of a specifically Christian concept of modesty, making this concept “possible.” Many traditional examples of the tiputa are now found in museums.

We’ve been shaped by our interaction with different kinds of things. Having the opportunity to think about how things have had this impact on humans is exciting to me – and I hope to my students.

What gets you excited about teaching this course?

I'm excited for all the opportunities to work with people in museum studies and religion, the diverse speakers who will be joining us and who will offer so many different perspectives on our interaction with sacred objects. Hannah Turner, a critical information studies scholar at UBC, will look at how we can use technology to decolonize museums and our interactions with spiritual objects: what happens, for instance, when we digitize artifacts, or use technologies such as 3D printing to represent and re-create sacred things?

Although we can’t go physically go the Royal Ontario Museum, we will go on virtual tours and talk to curators and educators there. One really exciting class will be a virtual tour of the Metropolitan Museum of Art in New York (MET) to get a behind-the-scenes look their current exhibition: Arte del mar: Artistic Exchange in the Caribbean.

Our main project, the big assignment for this course, will be the creation of our own museum catalogue, “Material Religion in Canada,” or maybe, “The Sacred Stuff of Canada” – we’ll work on a title together – using a new U of T app called Pressbooks. Students will choose an object they want to profile – something from a museum or even a Tim Horton's cup. We’ll embed images and soundbites to create a compilation and turn it into a digital book. The last class will be the book launch.

Students will be looking at artifacts that some communities consider sacred, which are often at the heart of many museum collections. How do you study these items?

One contentious debate that we’ll be exploring in the class has to do with the Elgin or Parthenon Marbles. They were originally part of the Parthenon temple complex in Athens before they were acquired by Lord Elgin and shipped to the British Museum, where they’ve been a major part of their collection for a long time.

But there’s ongoing debate about whether they should remain in the British Museum or whether they should they be returned to Greece, given they were a part of an important sacred structure there. We will be looking at this example from different perspectives as a way to lead us into questions about sacred objects in museums in Canada. Some scholars say they should stay in the British Museum and others say they should be returned to Greece. It’s not just an academic debate: it goes all the way up to Greek and U.K. governments.

We're asking questions about access: Who has the authority over these objects? Can they be bought and sold out of context? It’s about power, politics, economics and religion. All of these things are intertwined here. Provenance is a question not only about where objects come from, but about how they come from a particular place. These are exciting histories to explore, but they are also very fraught, often dubious and sometimes extremely difficult. The course will involve much lively conversation.

What would you say to a person who says, “I don’t need to take this course – I've been to plenty of museums?”

Many of us may have had the opportunity to go to museums in different places, but we don’t get to go behind the scenes. We don’t have conversations with the people who have helped procure objects from donors or who have bought them from individuals. We don’t talk to the curators who make decisions about how exhibits are put together, how objects are displayed, how galleries are constructed – all the logistics we take for granted.

We’ll look at what kinds of details go onto a museum label. There is such a small amount of space on a label. Who decides what information about an object is important or essential? Who gets to create that knowledge? Having conversations with the people who make these decisions, and thinking about why they've made these decisions will help us understand that these objects have their own histories and lives. We see such small parts of these lives when we visit these objects at museums.

As much as possible we will be talking with community partners involved in museums – educators and ambassadors and scholars – who will engage with us and offer diverse perspectives. We will speak with a curator at the MET, one of the most famous museums in the world.

We will engage in conversations with curators from small, local museums as well. We will talk to the director of a small museum in northern Ontario – the Muse | Lake of the Woods museum – about an exhibition focused on Shiibaashka’igan, the sacred jingle dress.

Put together in partnership with the Women’s Council of Grand Council Treaty #3 as well as Ahze-mino-gahbewewin/Reconciliation Kenora, the exhibition explores the ways in which the jingle dress, as a gift from the Gichi Manidoo/Creator, embodies dance, dream, family history and healing. The exhibition was also put together to raise awareness about missing and murdered First Nations women. So from scholarship to museum partners and educators on all different kinds of levels, we’ll be able to look deeply at those questions of ownership, heritage, authority and access.

What can this course offer students from other programs?

One of the major benefits of this course for students will be the opportunity to work with diverse forms of evidence in new ways. We will think critically together about visual evidence, material culture and our approach to objects; about how we look at an object, try to understand its past and present lives and make objects meaningful.

So often we work with text, but this course will give us the chance to work with material artifacts – like a pair of shoes, a sculpture. Students from many disciplines will get so much from this course. I can see it appealing to students from new media, publishing, visual media, the Faculty of Information, history, anthropology, art history, classics, Indigenous studies, the digital humanities program, Canadian studies, Caribbean studies, archaeology, material culture … the list is long.