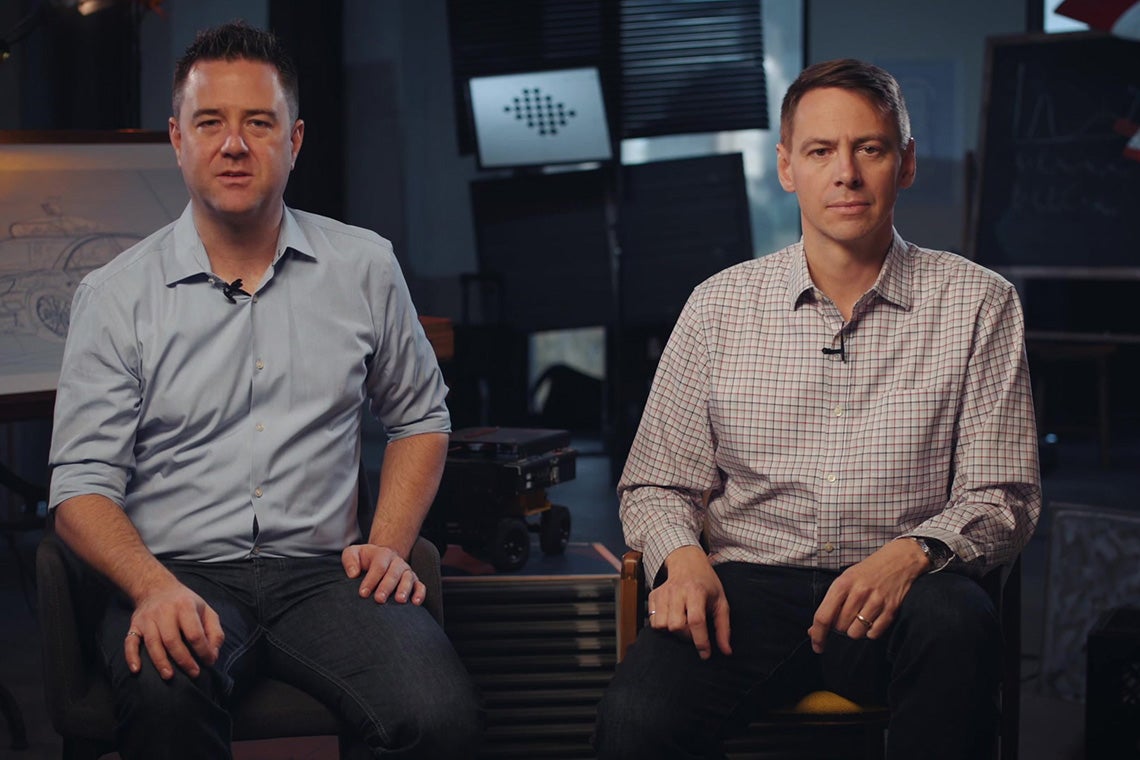 Two experts in autonomous vehicles from the University of Toronto’s Faculty of Applied Science & Engineering have partnered with Coursera to offer a four-course specialization in self-driving cars.

“The interest in autonomous driving is exploding,” says Steven Waslander, an associate professor at the University of Toronto Institute for Aerospace Studies (UTIAS).

“The investments have been phenomenal – every student I have trained in this area has had multiple job offers. There is a massive opportunity to contribute to this domain.”

Jonathan Kelly, an assistant professor at UTIAS, points out that self-driving cars have the potential to increase road safety, lead to more efficient use of roadways and vehicles, and even reduce pollution.

“We want to see this industry come to fruition,” says Kelly. “The Coursera platform enables us to reach as big an audience as possible.”

The specialization is aimed at learners who already have some engineering experience, including upper-year undergraduates, as well as graduates looking to upgrade their qualifications or enter a new field.

Through online video lectures, programming exercises and open-source simulation software, students will learn how to assemble the full software stack required to define the operations of an autonomous vehicle.

By the end of the first course, Waslander says students will have taught a virtual car to drive itself around a simulated racetrack. “We want to get people up and running quickly, giving them a broad sweep of every aspect of self-driving car development – how you process the data from sensors, estimate the car’s location, plan its next move and issue commands to drive the wheels,” he says.

That may sound straightforward, but both Waslander and Kelly caution that applying these principles in the uncontrolled environment of real-world driving is incredibly complex.

“I think you’d be hard-pressed to find a more challenging engineering problem than designing robust self-driving cars,” says Kelly. “But that challenge is very exciting. It forces you to think about new ways of doing things. And the more people we have doing it, the greater our chances of success.”

“Our courses are really meant as a starting point,” says Waslander. “They’ll get you into this world, but there are many ways that you can deepen your knowledge and experience from there.”

The first of the four courses, Introduction to Self-Driving Cars, is available now on the Coursera platform. Three others, to be launched in the coming weeks, include:

“Self-driving cars will reshape our cities and our lives, in the process creating tens of thousands of new jobs for those who have the right skills,” says Jeff Maggioncalda, CEO of Coursera. “We’re excited to partner with the University of Toronto, a top-ranked leader in autonomous vehicle research, to train the next generation of engineers who will bring safe, autonomous vehicles to public roads.”

To develop the courses, Waslander and Kelly drew on more than 30 years of combined experience in autonomous robotics research.

As a graduate student, Waslander worked on some of the first quadcopter aerial robots, programming them to navigate challenges without human intervention. Eventually, he moved on to ground-based vehicles such as the Autonomoose, an autonomous car that drove more than 100 kilometres on public roads in Ontario last summer.

Kelly has focused his research on autonomous robotic systems for a wide range of tasks, from space exploration to elder care. He and his team have also collaborated with a local industrial partner to develop a low-cost retrofit for electric wheelchairs that automates complex tasks, such as navigating doorways or docking behind a desk.

Kelly and Waslander are both excited by the chance to share their knowledge with a broader audience.

“In a couple of years, I would love to see a montage of the people who have completed this course talking about the impact they are having in their jobs,” says Kelly. “There are a lot of challenges to address, and we’re grateful for the opportunity to get more people involved in addressing them.”