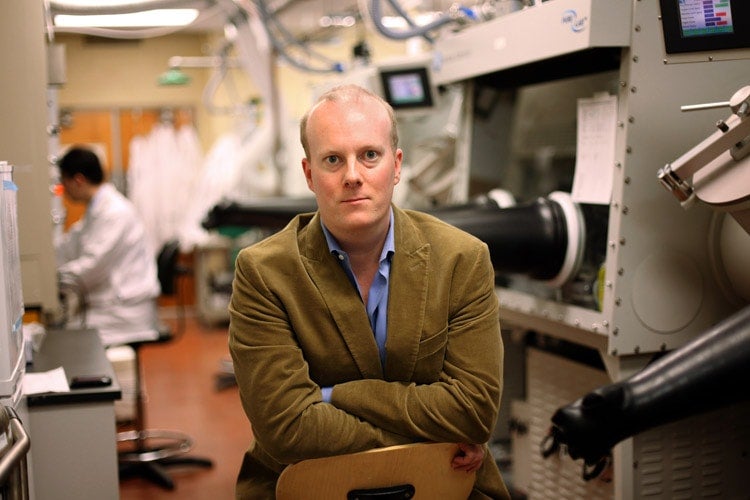 Ted Sargent: “Our ability to continue to recruit the best students from around the world hinges on our global reputation" (photo provided by U of T Engineering)

Edward (Ted) Sargent, an internationally renowned researcher in nanotechnology, has been appointed vice-president international for the University of Toronto, President Meric Gertler has announced.

Sargent, who has taught at the University of Toronto since 1998, is currently vice-dean, research for the Faculty of Applied Science & Engineering. His five-year appointment as vice-president international begins July 1, 2016. Judith Wolfson, the current vice-president, International, Government and Institutional Relations, is retiring after 10 years of distinguished service with the University of Toronto.

“Through his work both as a scholar and vice-dean, research in  the Faculty of Applied Science and Engineering, Professor Sargent has accumulated extensive experience in developing and enhancing global research networks involving both academic and industrial partners,” Gertler said. “I look forward to having him join the vice-presidential team.”

Sargent said he was excited to assume the role. “U of T commands great global mindshare, and yet our reputation internationally lags behind our truly world-class excellence in undergraduate teaching, graduate training, research, entrepreneurship, and innovation.

“I am honoured to have the chance to work with the deans, fellow academic leaders, our remarkable global network of alumni, and U of T’s many friends and supporters to advance our crucially important academic and outreach mission on the global stage.”

Research will play a key role in improving U of T's international reputation, he said. “U of T is a global research powerhouse. Our scholars are the best at what they do – in the world. This role is about finding and exploiting synergies among the many international dimensions of our scholarly mission.

“Our ability to continue to recruit the best students from around the world hinges on our global reputation – and this is forged through research, entrepreneurship, and the remarkable achievements of our alumni. Our capacity to resource our academic mission relies on our abilityto attract support and partners in Toronto, Ontario, Canada, and around the world.”

Sargent holds the Canada Research Chair in Nanotechnology. In 2015 he was appointed as University Professor, the University of Toronto’s most distinguished rank. His research interests cover many areas of nanotechnology and its application to communications and computing, medicine, and tapping new energy sources. His research has been cited more than 16,000 times and has been disseminated in Nature, Science, Nature Materials, Nature Nanotechnology, Nature Chemistry and Nature Photonics.

He said he would continue his research while serving as vice-president, international. “My research is at a very exciting stage today: our work on sustainable energy – its harvest from the abundant energy source that is the sun, and also its storage through the capture and renewable-powered chemical upgrading of CO2 from the atmosphere – gets more rewarding and more urgent with each passing day. The team of researchers I work with is a global team of scholars who are the best in the world at what they do. Energy research remains a key element of my role at U of T, and it is synergistic with the vice-president role.”

Sargent is a Fellow of the Royal Society of Canada, the AAAS, and the Canadian Academy of Engineering. He has also founded or co-founded two start-up companies, InVisage Technologies and Xagenic. His book The Dance of Molecules: How Nanotechnology is Changing Our Lives (Penguin) was published in Canada and the United States in 2005 and has been translated into French, Spanish, Italian, Korean, and Arabic.