Technologies that can help end ‘hallway medicine’: U of T health-care researchers to meet with Ontario legislators 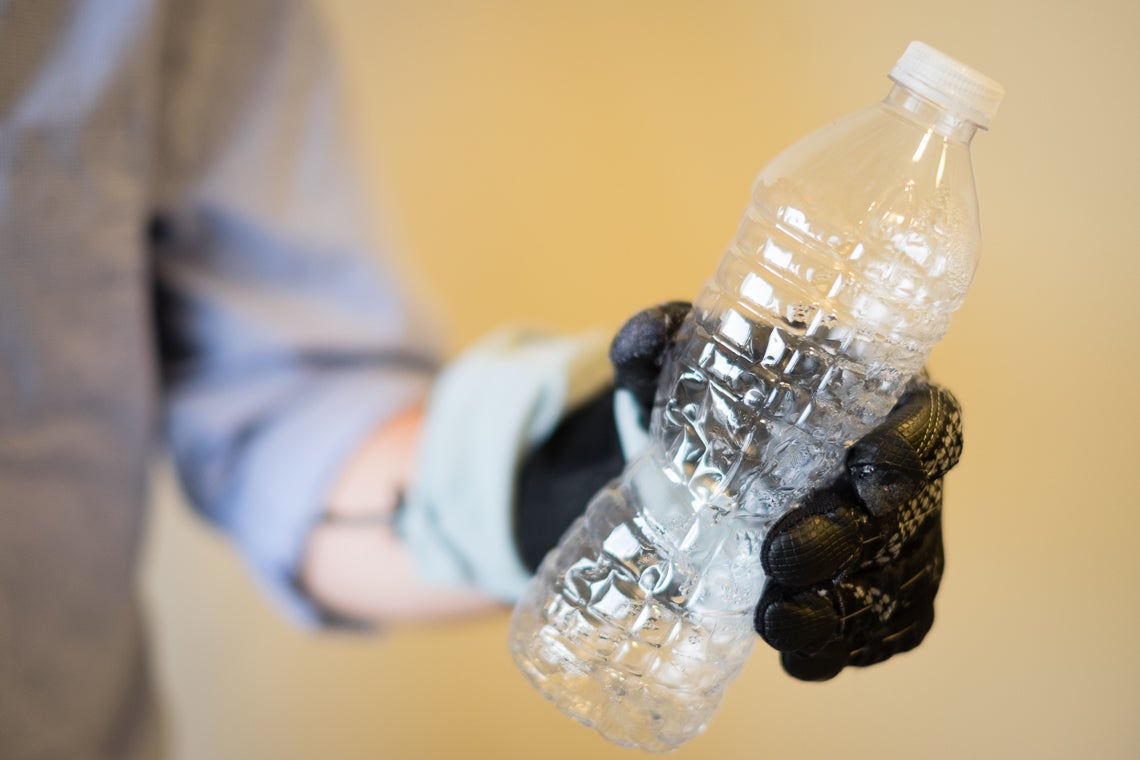 The robotic Hero Glove enables stroke survivors to open and close their hand to do all sorts of activities, from holding a fork to dressing themselves (photo by Geoffrey Vendeville)

Video games and a robotic glove that help stroke survivors regain dexterity in their hands and arms. A robot named Casper that assists older adults with everything from fixing a tuna sandwich to communicating with loved ones.

These are just some of the technologies being developed by University of Toronto researchers to help people live comfortably in old age, easing the burden on caregivers and the health-care system as a whole. And, tomorrow, some of those researchers will have an opportunity to meet with legislators at the first in a series of MPP Public Policy Breakfasts.

The event at Queen's Park, hosted by the Council of Ontario Universities, will focus on how university experts are helping to end “hallway medicine” – a term that refers to hospital overcrowding and the practice of treating patients on stretchers in hallways while they wait for a bed.

“By working together, universities, health-system partners, the private sector and government can address the medical challenges facing us today and in the future,” said Vivek Goel, U of T’s vice-president of research and innovation.

A key challenge is Canada's aging population. As of 2017, Canadian seniors outnumbered children under age 14 for the first time ever, while Statistics Canada expects seniors to make up between 23 and 25 per cent of the population by 2036.

Keeping Canadians healthy at home for as long as possible is among the goals of research being conducted at U of T and its nine partner hospitals, which, together, form one of the most vibrant life sciences and human health clusters in the world. That, in turn, helps to free up valuable hospital and other health-care resources for those who need it most.

“The University of Toronto is a leader in developing technologies that improve patients’ quality of life and reduce pressure on the health-care system,” Goel said.

Rosalie Wang, an assistant professor of occupational science and occupational therapy, will introduce lawmakers to projects by the Intelligent Assistive Technology and Systems Lab, which helps stroke survivors recover use of their upper limbs. About 50,000 Canadians suffer a stroke each year, and 14,000 die immediately. Those who survive often experience various degrees of impaired movement, vision or thinking.

With rehabilitation, however, some survivors can regain function in their affected limbs. Wang and PhD student Aaron Yurkewich have been designing technologies to complement a stroke survivor’s treatment program. One such technology is a robotic arm and video games that give a stroke survivor more opportunities to receive intense upper limb movement therapy. Patients often work toward a specific goal such as throwing a tennis ball or holding their grandchild.

With Wang's device, the patient grips a clear plastic cone, about the size of a waffle cone, which is connected to a robotic arm that applies assistive or resistive force. The patient can then, for example, play a video game that simulates an air hockey game, moving the cone around to control a player who guards the net. In another game, the patient is a snowball, rolling through a wintry maze to rescue other snowballs trapped in ice crystals.

It might look like entertainment, but patients are actually improving their strength, range of motion and the smoothness of their movement. The games also gather data that can be used as feedback to encourage patients to continue therapy. For therapists and researchers, the data can later be used to adjust the patient’s program. 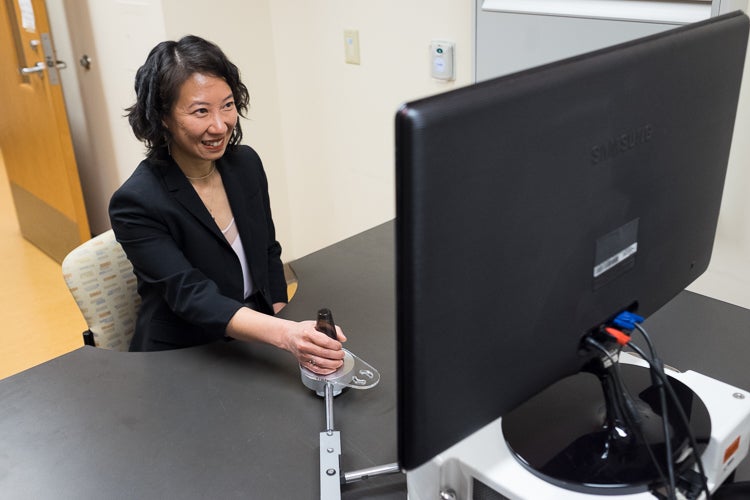 The device, aimed at improving the arm’s movement, is meant to free up an occupational therapists’ time so they can focus on other, more complicated aspects of a patient’s recovery, including transferring these mobility gains to functional, daily activity goals and community re-integration. “The opportunity really is not to replace what therapists do, but to optimize the way they practice by making the best use of therapy time,” Wang says.

The robot is designed for stroke survivors undertaking what's described as a moderate recovery stage. The device and games are being designed and evaluated with outpatients at the Toronto Rehabilitation Institute's Rocket Family Upper Extremity Clinic.

Wang says the device has given new confidence to stroke survivors who had lost hope of ever regaining movement. “Those who had a stroke years ago don’t realize there is still a lot of potential to gain” outside the initial recovery window of three to six months, she says. “There is still a window for recovery, but beyond that there is still more that can be done.”

Down the hall at Toronto Rehab, PhD student Yurkewich is working on the prototype of a robotic glove to help stroke and spinal cord injury survivors regain their movement and independence. The Hero Glove helps clench and unclench fingers so stroke survivors can do everyday tasks like grip a toothbrush or fork.

The device also collects data and provides feedback to improve a patient’s treatment plan. Yurkewich has anonymized videos of clinical feedback sessions showing how the glove has helped patients hold a water bottle again. “This person’s actually turning around to his wife to say, ‘Look I can use my hand again,’” Yurkewich says.

The tech-heavy projects don’t stop there. On the same floor at Toronto Rehab is the Home Lab, a replica apartment complete with bedroom, kitchen and even a front door with a welcome mat and working doorbell. The lab is a mock environment for researchers seeking to test their gadgets, including a ceiling-mounted machine that calls for help in the event of a fall. In one corner, there’s a robot designed by Goldie Nejat, an associate professor of mechanical engineering and Canada Research Chair in Robots for Society.

For over a decade, Nejat has worked on robots to stimulate older adults and assist with daily tasks. They perform a range of tasks, from initiating a game of bingo to reminding someone it’s lunchtime and guiding them through the steps in making scrambled eggs or spaghetti. The goal is to help older people with dementia or other types of cognitive impairment live safely and independently.

A demonstration of the robot, Casper, in the Home Lab at the Toronto Rehabilitation Institute.

After more than 100 hours of testing human-robot interaction, Nejat says the results are positive. People engage with the robot, ask it questions, joke around – almost as if it were human. “If they’re eating a meal, they would say ‘Are you going to eat too?’” she says.

She and her team of co-researchers are preparing for a longer-term study involving robots in 2019, a prelude to commercialization. Already she says she receives letters from children with older parents, long-term care homes and even seniors themselves who are interested in trying a robot.

As the average Canadian gets older, there’s an even greater need for solutions to support older adults, she says. “A lot of our health-care professionals are retiring too, and with the growing population [of elderly people] we don’t necessarily have the staff to support them,” she says.

Much of Dr. Robert Wu's work focuses on improving another aspect of medicine: communication. It’s been more than 10 years since Wu, an associate professor in U of T’s Faculty of Medicine and general internist at the University Health Network, had a pager clipped around his waist, but some of his colleagues still do. His research evaluates communication technology to make improvements to workflow and quality of care.

“It’s about making sure that the team knows what’s going on with the patient,” he says. “Medicine is much more fast-paced now than it was 10 or 15 years ago. There is more pressure, complexity and more people involved.”

Wu has helped develop a web app that is used for non-urgent communication between nurses and doctors in four services at Toronto General Hospital and Toronto Western Hospital. The app tracks when a message was sent and read.

He says his research is part of a team effort to end hallway medicine by improving efficiency in hospitals.

“Lots that we’re doing in internal medicine, but within the emergency department as well, is to improve flow and make sure we have the right number of beds,” he says.