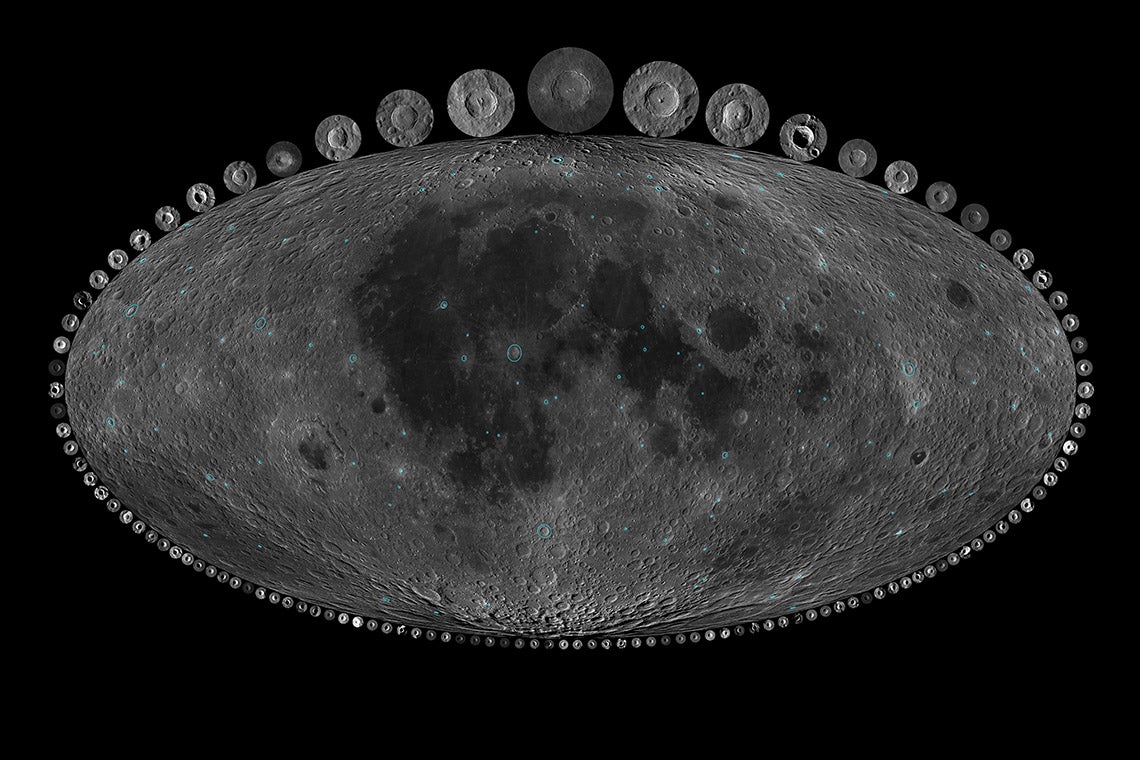 The image shows a map of all the lunar craters included in this study, with small images showing the study craters at their respective sizes relative to Copernicus, pictured at the top (data from NASA GSFC / LRO / USGS; image by Alex Parker)

An international team of scientists is challenging our understanding of a part of Earth’s history by looking at the moon, the most complete and accessible chronicle of the asteroid collisions that carved our solar system.

In a study published today in Science, the team shows the number of asteroid impacts on the moon and Earth increased by two to three times starting around 290 million years ago.

“Our research provides evidence for a dramatic change in the rate of asteroid impacts on both Earth and the moon that occurred around the end of the Paleozoic era,” said lead author Sara Mazrouei, who recently earned her PhD in the department of Earth sciences in the University of Toronto’s Faculty of Arts & Science.

“The implication is that since that time we have been in a period of relatively high rate of asteroid impacts that is 2.6 times higher than it was prior to 290 million years ago.”

It had previously been assumed that most asteroid-produced craters on the Earth older than 290 million years had been erased by erosion and other geologic processes. But the new research shows otherwise.

“The relative rarity of large craters on Earth older than 290 million years and younger than 650 million years is not because we lost the craters, but because the impact rate during that time was lower than it is now,” said Rebecca Ghent, an associate professor in U of T’s department of Earth sciences and one of the paper’s co-authors. “We expect this to be of interest to anyone interested in the impact history of both Earth and the moon, and the role that it might have played in the history of life on Earth.”

Scientists have for decades tried to understand the rate that asteroids hit Earth by using radiometric dating of the rocks around craters to determine their ages. But because it was believed erosion caused some craters to disappear, it was difficult to find an accurate impact rate and determine whether it had changed over time. This image depicts the method by which the Diviner instrument on the Lunar Reconnaissance Orbiter senses the heat emanating from the lunar surface, which allows scientists to map the abundance of rocks around young impact craters. The team used this information to estimate ages for lunar craters larger than 10 kilometres in diameter. Young craters have lots of rocks near their rims, and those rocks break down into smaller particles over time, disappearing from the Diviner thermal data (data plots by Rebecca Ghent; illustration by Thomas Gernon)

A way to sidestep this problem is to examine the moon, which is hit by asteroids in the same proportions over time as Earth. But there was no way to determine the ages of lunar craters until NASA’s Lunar Reconnaissance Orbiter (LRO) started circling the moon a decade ago and studying its surface.

“The LRO’s instruments have allowed scientists to peer back in time at the forces that shaped the moon,” said Noah Petro, an LRO project scientist based at NASA Goddard Space Flight Center.

Using LRO data, the team was able to assemble a list of the ages of all lunar craters younger than about a billion years. They did this by using data from LRO’s Diviner instrument, a radiometer that measures the heat radiating from the moon’s surface, to monitor the rate of degradation of young craters.

During the lunar night, rocks radiate much more heat than fine-grained soil called regolith. This allows scientists to distinguish rocks from fine particles in thermal images. Ghent had previously used this information to calculate the rate at which large rocks around the moon’s young craters – ejected onto the surface during asteroid impact – break down into soil over tens of millions of years. By applying this idea, the team was able to calculate ages for previously undated lunar craters.

When compared to a similar timeline of Earth’s craters, they found the two bodies had recorded the same history of asteroid bombardment.

“It became clear that the reason why Earth has fewer older craters on its most stable regions is because the impact rate was lower up until about 290 million years ago,” said William Bottke, an asteroid expert at the Southwest Research Institute in Boulder, Colo., and another of the paper’s co-authors. “The answer to Earth’s impact rate was staring everyone right in the face.”

The reason for the jump in the impact rate is unknown, though the researchers speculate it might be related to large collisions taking place more than 300 million years ago in the main asteroid belt between the orbits of Mars and Jupiter. Such events can create debris that can reach the inner solar system.

Ghent and her colleagues found strong supporting evidence for their findings through a collaboration with Thomas Gernon, an Earth scientist based at the University of Southampton in England who works on a terrestrial feature called kimberlite pipes. These underground pipes are long-extinct volcanoes that stretch, in a carrot shape, a couple of kilometres below the surface, and are found on some of the least eroded regions of Earth in the same places that preserved impact craters are found.

Gernon showed that kimberlite pipes formed over the past 650 million years had not experienced much erosion, indicating that large impact craters younger than this on stable terrains must also be intact.

“This is how we know those craters represent a near-complete record,” Ghent said.

While the researchers weren’t the first to propose that the rate of asteroid strikes to Earth has fluctuated over the past billion years, they are the first to show it statistically and to quantify the rate.

“The findings may also have implications for the history of life on Earth, which is punctuated by extinction events and rapid evolution of new species,” said Ghent. “Though the forces driving these events are complicated and may include other geologic causes, such as large volcanic eruptions, combined with biological factors, asteroid impacts have surely played a role in this ongoing saga.

“The question is whether the predicted change in asteroid impacts can be directly linked to events that occurred long ago on Earth.”

The findings are described in the study “Earth and Moon impact flux increased at the end of the Paleozoic,” published in Science. Support for the research was provided by the National Science and Engineering Research Council of Canada, NASA’s Solar System Exploration Research Virtual Institute, and the Natural Environment Research Council of the United Kingdom.

With files from NASA