From Syria to U of T Engineering: How one student fled civil war to complete his degree 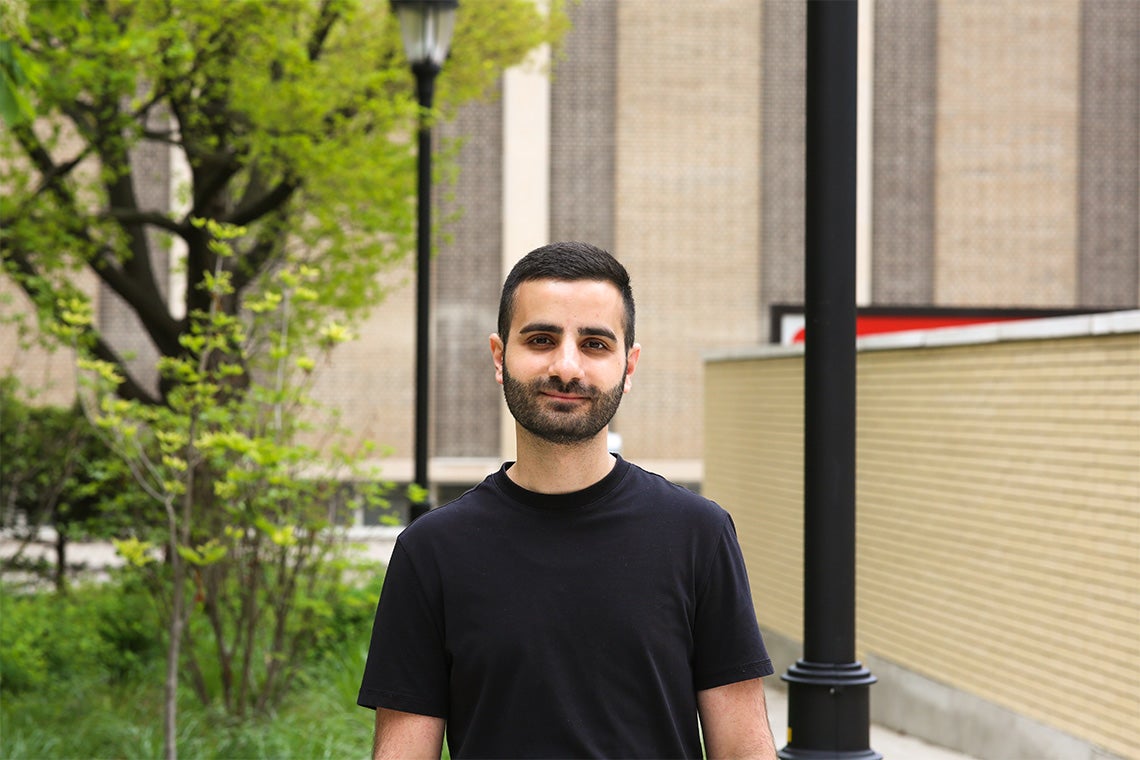 Edmund Shalhoub, a student in the Faculty of Applied Science & Engineering, will be graduating this June after coming to Canada in 2017 as a Syrian refugee (photo by Safa Jinje)

This June, Edmund Shalhoub will finally achieve his long-held ambition of graduating with a bachelor’s degree in engineering – a journey he started 12 years ago in Syria.

“In 2010, my life was quite normal: I went to school, I spent time with friends and I wanted to specialize in automobile and heavy machinery engineering, as part of a mechanical engineering degree,” says Shalhoub, who studied materials science and engineering at the University of Toronto.

“I always believed that having an engineering background – with all the technical and theoretical knowledge – would be my vehicle to make positive change in this world, to discover new things and to solve current problems.”

But achieving this goal was far from straightforward. In 2013, three years into his mechanical engineering education, Shalhoub was forced to flee his home country of Syria, where a civil war was raging. When an explosion occurred near Damascus University, close to Shalhoub's home, he realized it was no longer safe for him in Syria.

He arrived in Turkey in September 2013, determined to continue his studies. But since he only spoke Arabic and English, he spent his first year in Istanbul learning Turkish before starting over at Yildiz Technical University – where he earned a spot in the materials science engineering program.

While in Turkey, Shalhoub applied for refugee status through the United Nations High Commissioner for Refugees (UNHCR), and his application was approved and referred to the Canadian Embassy.

“When I got accepted to come to Canada, I was told I would have to leave Turkey soon,” he says. “I had to quit my studies again, and that was hard, but I was motivated by the great opportunity.”

Still, arriving alone in a new country was a terrifying experience, Shalhoub says. The experience was made easier by the support of the Canadian government through a resettlement and assistance program, which provided income for his first year in the country.

But Shalhoub was eager to pick up his studies where he left off.

“I started researching U of T while I was in Turkey and I learned it was one of the best universities in the world,” he says. “I felt like it was going to be my school – I actually felt it.”

Soon after arriving in Canada in 2017, Shalhoub visited the Faculty of Applied Science & Engineering admissions office and spoke with a representative, who listened to his story and advised him to take an English language assessment test as part of his application.

“I passed and received an offer for the 2017-18 academic year,” Shalhoub says. “I was able to transfer 10 courses from my previous universities, so I was a part-time student for my first two years.”

While his time at U of T Engineering proved to be challenging and full of emotional highs and lows, Shalhoub found a supportive community through his part-time work as a communications assistant in the office of the chief librarian at Robarts Library.

“Last November, I became a Canadian citizen, and my colleagues at the library threw me a surprise party to celebrate,” he says. “Everyone there has always made me feel so welcome.”

To overcome personal struggles during his second and third years of study, Shalhoub was able to rely on on-campus resources such as mindfulness and meditation sessions, as well as support from the Health and Wellness Centre. As for tuition, he received support from the university through the Scholars and Students at Risk Award Program, for asylum-seekers or refugees whose education was impacted by a changing political climate in their country of current or future study.

Living outside his country of origin has helped Shalhoub learn things about himself, he says. “I’ve discovered my strength and my ability to accomplish things I didn’t know I was even capable of when I lived in Syria. And I now know I want to help develop solutions for protecting our environment,” he says.

Shalhoub’s passion for environmentalism ultimately led him to pursue a minor in environmental engineering through U of T Engineering's cross-disciplinary programs office. He is still weighing his next move after graduation but says that his time at U of T will always stay with him.

“I am still not sure how exactly I am going to contribute to solving these problems,” he says, “but I know that I want to use my materials science and environmental engineering education, along with all the technical skills I learned during the last 12 years, to make a difference in the world.”