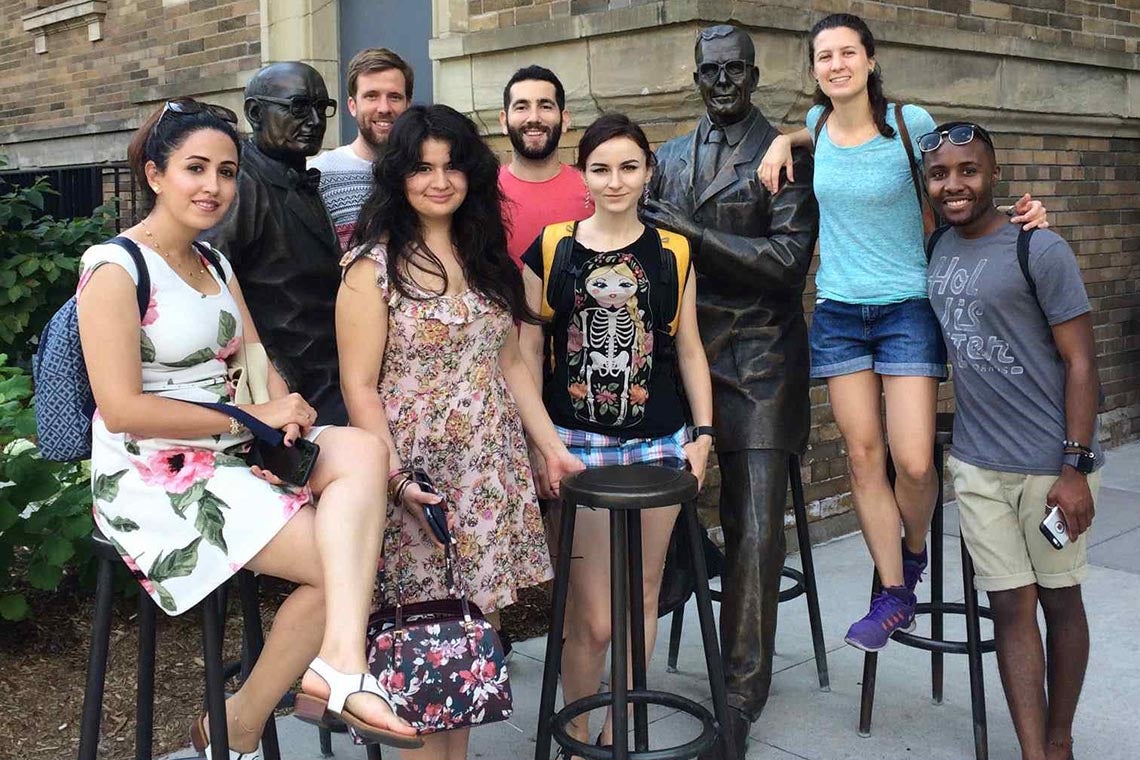 Some of the 26 participants in Summer by Design, which one PhD candidate said "opened my eyes to how many potential jobs there are for us as scientists, from policy-making to intellectual property law" (photo by Jackie Denholm)

How can regenerative medicine researchers move innovative discoveries out of the lab efficiently and effectively to benefit patients sooner?
That’s a key question a group of high-performing PhD candidates and post-doctoral and clinical researchers from across Canada and around the world tackled in July at Summer by Design.
The workshop, hosted by the University of Toronto’s Medicine by Design initiative in partnership with the Rotman School of Management and CCRM, offered 26 participants an opportunity to learn from experts in clinical translation and commercialization and explore the city’s dynamic life sciences ecosystem.
“It really makes you see that the research you are doing could have an impact in the future,” said Emily McGaugh, a PhD candidate in U of T’s department of physiology who is working on regenerative medicine approaches to Type 1 diabetes in the laboratory of Cristina Nostro at University Health Network (UHN).
“It’s these collaborations and this networking that can really move regenerative medicine forward.”
Will Mitchell, the Anthony S. Fell Chair in New Technologies and Commercialization and a professor of strategic management at Rotman, led sessions on negotiations, marketing, leadership and global strategy. Staff at CCRM, MaRS Excite, UHN and Torys LLP offered insights into economic reimbursement, regulatory affairs, clinical trials, technology and market assessment, and manufacturing and scale-up.
“Summer by Design opened my eyes to how many potential jobs there are for us as scientists, from policy-making to intellectual property law,” said Alisa Molotova, a PhD candidate at the University of Cambridge.
Workshop participants also studied BlueRock Therapeutics and met with executives to learn more about the company, based partly in Toronto, and the Cell+Gene platform it is pioneering. One of BlueRock’s therapeutic applications relies on technology developed by Medicine by Design-funded researchers and BlueRock founding scientists Gordon Keller and Michael Laflamme at UHN, and aims to develop, manufacture and deliver native heart muscle cells with engineered functionality to restore function in patients who have had heart attacks or are suffering from chronic heart failure.
Summer by Design also allowed the group – composed of emerging researchers from the University of Toronto and its affiliated hospitals, the University of British Columbia, and universities in the United Kingdom, Germany, the Netherlands, Sweden, France and Australia – to make connections with participants from around the world.
“This is like summer camp for researchers,” said Michael May, chief executive officer of CCRM. “They’re bonding, they’re learning from each other and they will stay connected forever. We want to see our alumni driving the industry for years to come.”
Ann Perry