Study with the world: Current and former students on why they picked U of T 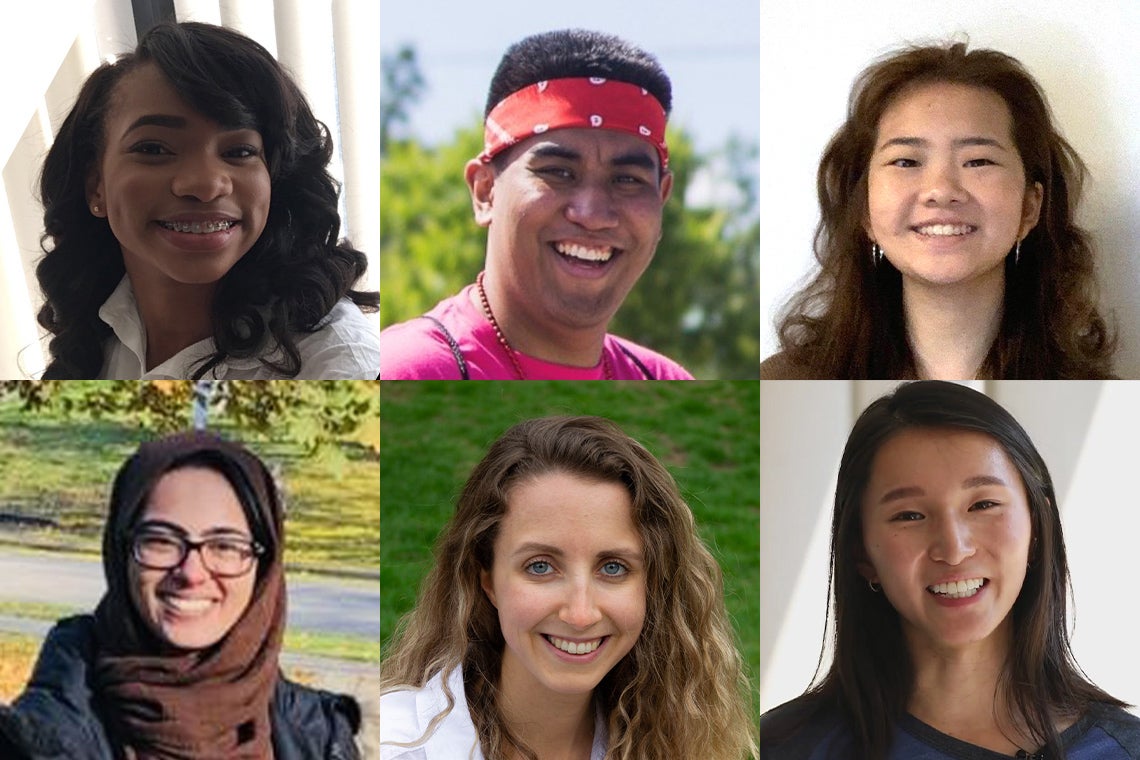 More than 15,000 new undergraduate students enrol at the University of Toronto every year.

Why do they choose U of T?

Not surprisingly, the reasons are as varied as the university’s student body itself.

For some, it comes down to the university’s distinguished position in international rankings. Others cite U of T’s top-tier researchers who are tackling some of the world’s biggest problems, or the opportunity to study in a specific program.

Still others say they are drawn to Toronto’s reputation as a diverse, welcoming city – and the opportunity to study at one of three unique campuses: St. George, U of T Mississauga and U of T Scarborough.

Many students also note that their U of T experience often extends beyond the classroom, changing them in ways they could have never imagined.

U of T News spoke to a handful of students, past and present, about why they enrolled at the university and how it helped them grow.

The world as a classroom 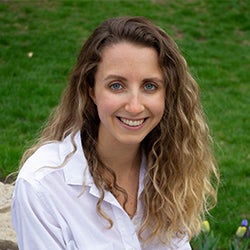 One of the items near the top of Jillian Sprenger’s list of goals for university was to learn more about the world and global health challenges.

She says U of T seemed like the right fit since it offered a major in global health and is home to the renowned Munk School of Global Affairs & Public Policy.

Sprenger wasn’t disappointed. Every summer, she hopped on a plane – sometimes more than once – to do international fieldwork.

“I tell everybody who ever asks me about U of T that it’s the best place ever because of these kinds of opportunities that it has,” she says.

In her second year, she travelled to Myanmar to study mobile health technology and how it could be used to address health issues, particularly child malnutrition. Then she was off to Taiwan to study the country’s policies to combat antimicrobial resistance.

In third year, she travelled to Ethiopia to explore how cash transfers were used to address food insecurity as part of a case study by the Reach Project (now the Reach Alliance), a student-led and faculty-supported initiative to study social programs helping the most marginalized populations. That same summer, Sprenger also went to Sri Lanka to work with her brother  on a short documentary about climate migration, interviewing farmers who were forced to take jobs in the city because of droughts.

The research projects spanned thousands of kilometres and focused on different problems, but they were all connected to changes in the environment, Sprenger says.

Currently a master’s student in biophysics at U of T, Sprenger says her graduate studies will focus on the existential threat facing the planet today: climate change. She was recently awarded a prestigious Gates Cambridge scholarship to study environmental policy, with a focus on environmental law, at Cambridge University in the fall.

“We need new and creative ways of addressing this defining challenge of our time, and I think the law will be a powerful tool in this regard,” she says. 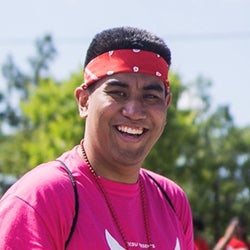 Kevin Turingan was a student at another Canadian university for less than a week before a rare chronic illness forced him to put his studies on pause.

When he was well enough to return to school, he felt like applying to a university closer to where he lived.

“I live in Scarborough and I wanted to go to U of T Scarborough,” he says. “That was my dream.”

He enrolled in sociology, and says he felt much more at home at the campus because it provided a more intimate, family-like atmosphere. Turingan adds that he found moments of peace between classes when strolling along a 500-metre nature trail through the Highland Creek Valley.

When he needed to let off steam, he worked out or shot hoops at the Toronto Pan Am Sports Centre.

Now at the tail end of his bachelor’s degree, majoring in sociology and minoring in psychology and statistics, he says U of T Scarborough’s environment allowed him to flourish. He got involved in the Scarborough Students’ Union and more recently became co-president of the Students of Sociology, gaining valuable experience.

“Throughout my time at U of T, I’ve definitely grown as a person but also as a leader,” he says, adding that he’s now also a campus life and special events intern at U of T Scarborough.

“What I liked about UTSC was the community, but it was also a safe space where there are so many opportunities for you to grow,” Turingan says. “Everyone there – the professors, students, staff – they’re all there to help you.

“It helped me grow out of my inner bubble.” 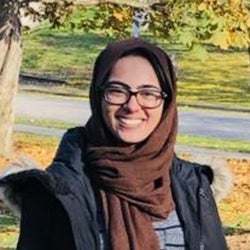 When she was in Tanzania applying to universities, it was U of T’s top position in global rankings that first caught Sumana Dhanani’s attention. Then, she visited Toronto for the first time and toured the St. George Campus, admiring the blend of old and new architecture – all of it a short walk from downtown and the iconic CN Tower.

But it was residence at Chestnut Residence where Dhanani ultimately discovered why she truly enjoyed being at U of T: Studying alongside students who, like her, came from all over the world.

“What really impressed me was the level of diversity and how many different backgrounds you come across at U of T,” says Dhanani, a Woodsworth College student who studied biochemistry and global health at U of T and is now pursuing graduate studies in public health at Purdue University.

Living with other students from Ecuador, India and Lebanon meant Dhanani was experiencing the world within her dorm. Her kitchen was stocked with a wide array of foods, her roommates phoned home in Spanish, Hindi and Arabic – and, some nights, they watched movies and TV shows from their respective countries to share with one another a glimpse of their cultures.

“I learned so much just talking to people from different perspectives, different walks of life,” Dhanani says. “It really broadened me in ways that went beyond just the academic.”

A bonus: She now has friends around the globe she can visit on holiday. 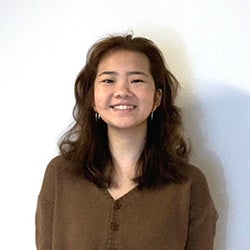 In some ways, Singapore-based student Ashley Heng was following in her parents’ footsteps when she chose to study in Canada: Her mom studied economics and industrial relations at U of T and her father studied math at the University of Alberta.

But Heng opted for a different path, applying to arts management at U of T Scarborough.

“At the end of the day it was my decision,” she says.

Like other students, she took U of T’s top international rankings into consideration when choosing a school, but says the main draw was the unique U of T Scarborough program that mixed arts and business courses. Established in 1984, it’s the longest-running program of its kind at the undergraduate level in Canada and offers courses taught by arts managers, researchers and award-winning artists.

“For me looking at arts management was like a way of studying arts but also getting the chance to have a bit more stability with it, in my opinion, and also really like the organizing side a lot,” Heng says.

“I love music, and I love theatre, but I love working with it behind the scenes, organizing and administration.”

In high school, Heng helped put on rock and acoustic nights, musical theatre and cabaret. At U of T, she learned more about administrative and marketing work in arts while continuing to study violin, piano and voice.

Having just wrapped up her second year, Heng has served as executive team secretary of ARTSIDEOUT, U of T Scarborough’s largest one-day multi-disciplinary arts festival, and as secretary of the UTSC Drama Society.

Heng says that, although her field may sound niche to some, the reality is that arts management has many applications.

“One thing the program has taught me is that everybody has their own relationship with the arts,” she says.

“I believe that’s really important because it brings another dimension to our lives.” 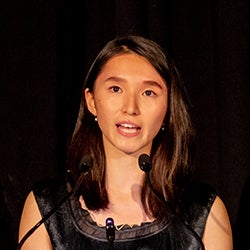 Hui Wen Zheng had several items on her checklist when applying to university.

A first-generation immigrant to Canada, she was attuned to the importance of building international connections in an increasingly globalized world. At the same time, she wanted to experience life in one of the largest and most diverse cities in North America.

“Coming from Calgary, I wanted to go somewhere much bigger and more cosmopolitan, and I would say Toronto definitely offers that,” she says.

Just a short walk south of the St. George campus, for example, Zheng says she routinely enjoyed everything from take-out Vietnamese to sit-down Italian meals and – of course – the city’s take on one of Canada’s better-known dishes: poutine.

A double-major in peace, conflict and justice, and contemporary Asian studies, Zheng says she also got a taste of the global education she was seeking from the Munk One program.

“I definitely have to shout out my Munk One [Associate] Professor Teresa Kramarz,” she says, referring to the program’s director. “She is really committed to improving the undergrad experience, getting hands-on opportunities that are very applied instead of just theoretical. “Having that right in first year was super amazing because it informed how I saw everything else that I learned.”

Zheng later applied her studies through a research project in Shenzhen and Hong Kong that focused on the mental health of rural-urban migrants in China.

She says the experience of interviewing researchers, migrants and service providers gave her a deeper understanding of the issues than reading a textbook ever could.

“You learn how to situate yourself in a different environment,” she says. “I had to re-examine my privilege within this situation because how other people see me is going to affect how they give responses.

“Those are the sort of nitty-gritty, human-to-human relations and logistics that we don’t think about when you’re just reading a research paper.”

‘More than a [student] number’ 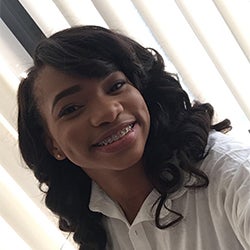 Tatiana Harvey recalls being impressed with U of T Mississauga’s sleek modern architecture when she first set foot on campus during a tour when she was fresh out of high school – and pleasantly surprised when her guide told her that deer roamed the nearby woods.

Now a fourth-year undergraduate studying comparative physiology, Harvey has an even bigger appreciation for the picturesque and intimate campus, which she says has made it easy to make friends and get to know faculty and staff.

In first year, for example, Harvey says she connected with Fiona Rawle, an associate professor, teaching stream, during her “walking office hours” (Rawle invites students to join her on a walk outside so they’re less nervous about asking questions.)

Harvey says she sees familiar faces everywhere she goes on campus, meaning that she often recognizes students in her courses on the first day of class.

“We’re all going through the same thing in terms of the difficulty of courses, so it allows you to network and develop close bonds.”

Harvey also speaks highly of the university’s wellness programs that help students’ cope with the pressure of exams, projects and term papers. As a wellness ambassador, Harvey helped other students get to know the services and resources that exist to support them.

“Especially now that we’re in a pandemic, it’s very important to students to feel that we’re more than a [student] number, and that the university definitely cares about your physical mental and emotional health,” she says.