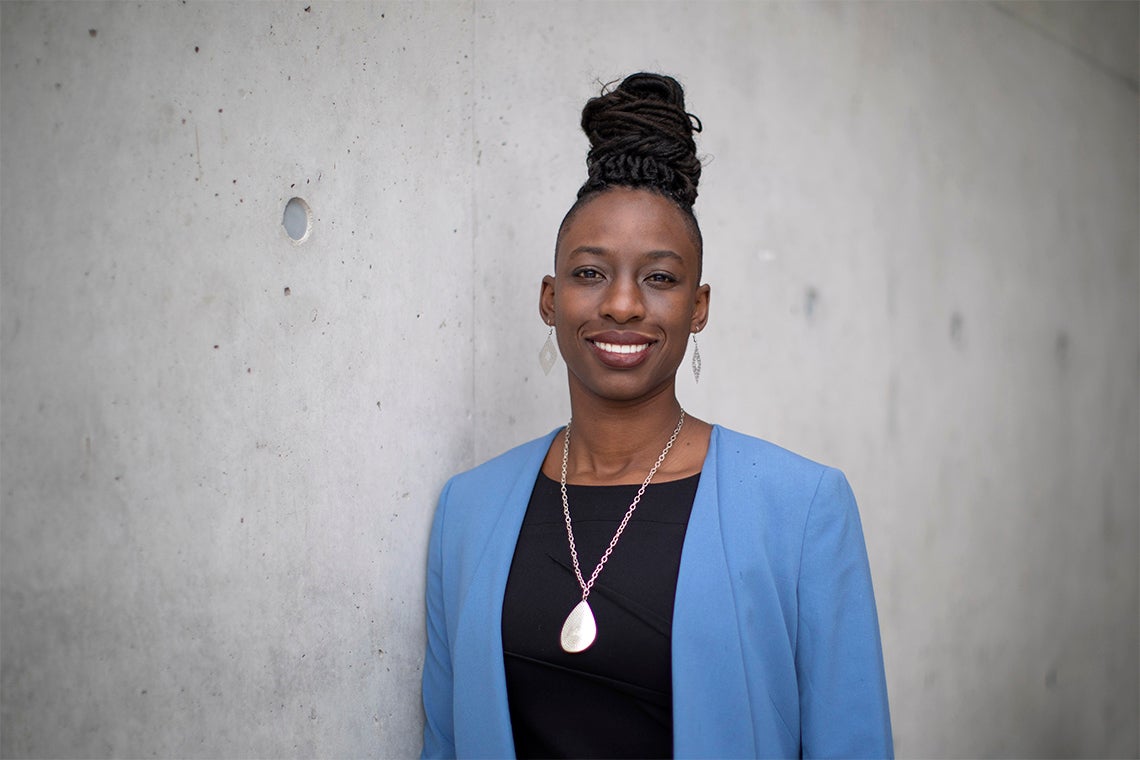 Janelle Joseph, a researcher in U of T's Faculty of Kinesiology & Physical Education, led a project with Ontario University Athletics that examined racial demographics, as well as members' experiences and understanding of racism (photo by Nick Iwanyshyn)

An anti-racism project led by a University of Toronto researcher in collaboration with Ontario University Athletics found many “completely unaware of the depths of the problem.”

The project, led by Janelle Joseph, an assistant professor in the Faculty of Kinesiology & Physical Education (KPE) and her Indigeneity, Diaspora, Equity and Anti-Racism in Sport (IDEAS) research lab, aimed to shed light on OUA racial demographics and members’ experiences and understandings of racism – and propose strategies for change.

“The OUA anti-racism project was unique in that it examined a single athletic organization from the perspectives of a wide range of stakeholders, including administrators, coaches and student athletes,” said Joseph.

“This allowed us to get a good understanding of the relationship between individual experiences and systemic barriers, especially across a large and diverse province such as Ontario.”

The OUA established the Black, biracial and Indigenous (BBI) task force in August  2020, with the KPE-led project stemming from the group’s work. Nearly 45 per cent of an estimated 11,200 members of OUA – including 4058 student athletes, 716 coaches and 227 sport administrators – completed questionnaires designed by Joseph and her team. Additionally, 107 members participated in interviews and focus groups, including all 20 OUA athletic directors.

Among the report’s key findings: universities across Ontario share similar experiences with racism in sport, meaning racism can’t be dismissed by universities as a problem that only happens elsewhere – on a different team or at a different school.

“The assumptions that racism exists only in the United States or only at those universities about which public reports have been shared is what allows racism to perpetuate,” said Joseph. “But in the same way that culture has shifted on how sexism or concussions are viewed in the OUA today, there needs to be a public acknowledgement of ‘hidden’ racism in order to prevent racial injustice.”

“Racism can take many forms,” said Sabrina Razack, a PhD student in Joseph’s IDEAS research lab. “Overwhelmingly, the examples shared by OUA members fall into the category of microaggressions, which, whether intentional or not, are still deeply felt by racialized members of the community and perpetuate exclusion.”

“The biggest surprise for me was the disparity between how racism was a common, daily experience for some and yet completely unknown by others” said Joseph. “Those who are racialized described racist jokes and barriers to recruitment and promotion that, sadly, had become expected. Meanwhile those who had not witnessed, heard or seen racism first hand were completely unaware of the depths of the problem.”

To make significant change, Joseph says there is a need to first  increase awareness of racism and how racial inequities are embedded in the fabric of university sport.

“We know the range of ways racism occurs and have tools for change recommended directly by OUA members,” she said. These include:

Gord Grace, the president and CEO of the OUA, wrote In the introduction to the report that the takeaways from this study will serve as a foundation to support future strategic action and help make the organization a more inclusive and safe community for all. To that end, the OUA has already begun implementing some of the recommendations from the report, including the launch of the Black or Indigenous Heritage Student-Athlete (BIHS) bursary, which was announced in September.

“The entire OUA community is thankful for the opportunity to work with the IDEAS Research Lab, not only because of the exemplary work done within the Anti-Racism Project, but because of what it will mean moving forward for the entire university sport landscape in Ontario and beyond,” said Grace. “With this invaluable research in hand, we are truly motivated and better informed to help address real change in the OUA.”