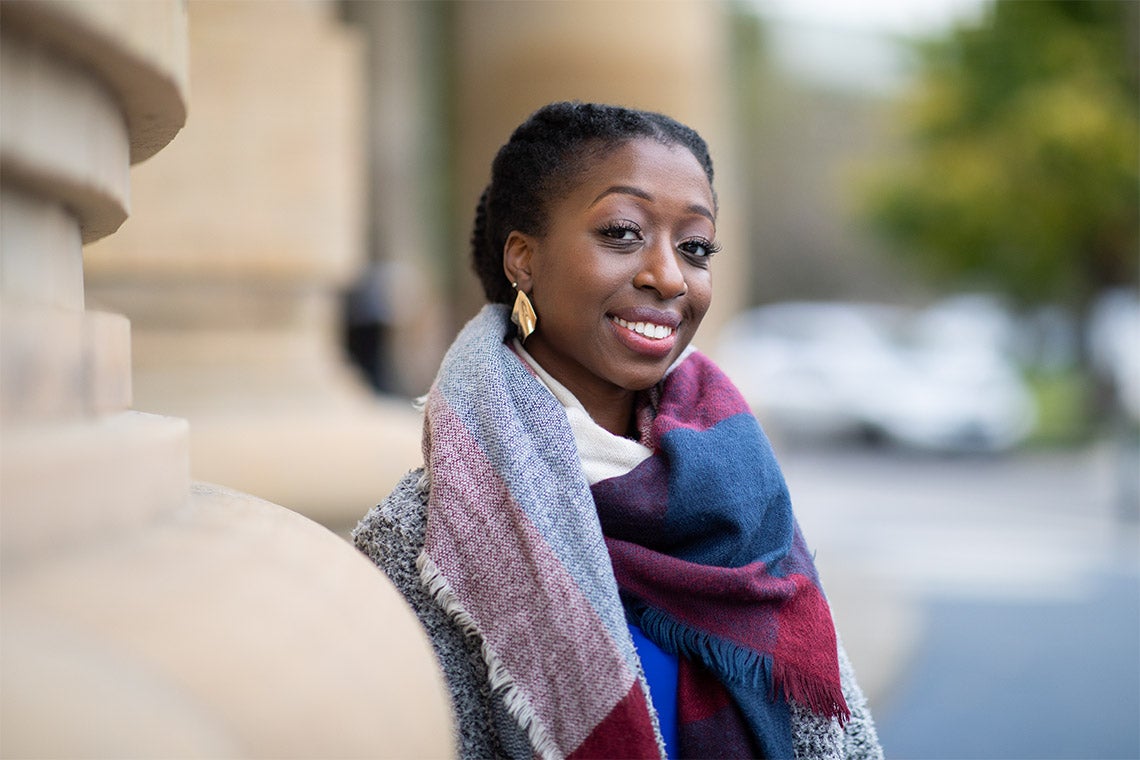 "Just like I had my mom as a mentor and role model, I wanted to be that for other students,” says Kezia Amaoko of her work in U of T's Summer Mentorship Program in health sciences (photo by Nick Iwanyshyn)

When Kezia Amoako was only a few years old, her mother would carry her to classes at the University of Toronto and practise her pediatric assignments on the delighted little girl.

“I remember that so vividly,” Amoako says of those times with her mother, who graduated in 1995 and works as a registered nurse.

“It stayed with me from a young age and, 20-plus years later, I decided to go into nursing, and she had a big part of it. It’s the whole cycle of life thing – she would take me to school at U of T, and now I’m graduating as an RN. It’s pretty cool.”

She originally planned on becoming a lawyer, but seven months working on health promotion with high school students in Ghana – her immigrant parents’ native country – changed her mind.

When she returned, she worked in community health with people living with HIV and those at high risk of contracting the disease. Doing that work inspired her to do more, she says, and nursing was a logical next step.

All of the nursing students in the challenging and accelerated “second entry” bachelor program have at least one university degree already. The program compresses four years of education and training into as little as 19 months.

“The biggest challenge for me in the nursing program was keeping up with the pace of things. I had no science background, so I kind of felt like a fish out of water for the first part of my program,” says Amoako.

“Within the first couple of weeks, I was placed at Scarborough General Hospital in the labour delivery unit and, before I know it, I’m helping a woman deliver her first baby, holding her leg and asking myself how I got there.”

Being thrown into clinic placements, lab work, case studies and myriad other assignments not only brought her up to speed in a hurry, it opened her eyes to the sheer diversity of roles that nurses play in health care, from the front lines to administration.

“It was really fun, but it made you realize nursing is a very underappreciated profession.”

That’s the message she took with her when she got involved in the Summer Mentorship Program in health sciences, aimed at high school students in Indigenous and racialized communities.

“It was really important for me to be involved because I understand the value of mentorship and seeing someone who looks like you in positions of leadership,” says Amoako.

“As a racialized person myself, I got to tell them that they were just as capable of pursuing this as me. And just like I had my mom as a mentor and role model, I wanted to be that for other students.”

Amoako also credits the nursing faculty for supporting her through the challenges of the program, especially Erica Cambly, an assistant professor, teaching stream, who taught one of her seminar courses.

“Those courses are usually small class sizes and so I was able to get closer to her,” says Amoako. “She was very encouraging.”

Cambly says Amoako was very thoughtful and respectful in the classroom, and was always ready to share her perspectives in a way that helped her classmates open their eyes to different points of view.

“There were often discussions around issues like racialization or marginalization where maybe other students didn’t understand,” says Cambly.

“And with a great degree of respect, she would talk about her experiences in the community working with different people.”

Amoako says she’s still weighing her options, but thinks she’ll probably work for a few years in a hospital surgical unit, then return for her master's degree and become a clinical educator so she can mentor nursing students.

“I would absolutely hope that is exactly what she would do,” says Cambly. “She just has such an immense kindness and excitement and a love for all things nursing. She would be a wonderful educator and nurture student nurses very well. I have tremendous respect for her.”

Amoako says the feeling is mutual, and she is inspired to help others follow in her footsteps out of gratitude for the support she received.

“It’s interesting to see my own growth, feeling like a fish out of water, and now being recognized as an exceptional student,” she says.

“I think it speaks to the support I’ve gotten from the faculty and my family and friends.”