Stretchy, skin-like sensors developed by U of T researchers bring a human touch to wearable tech 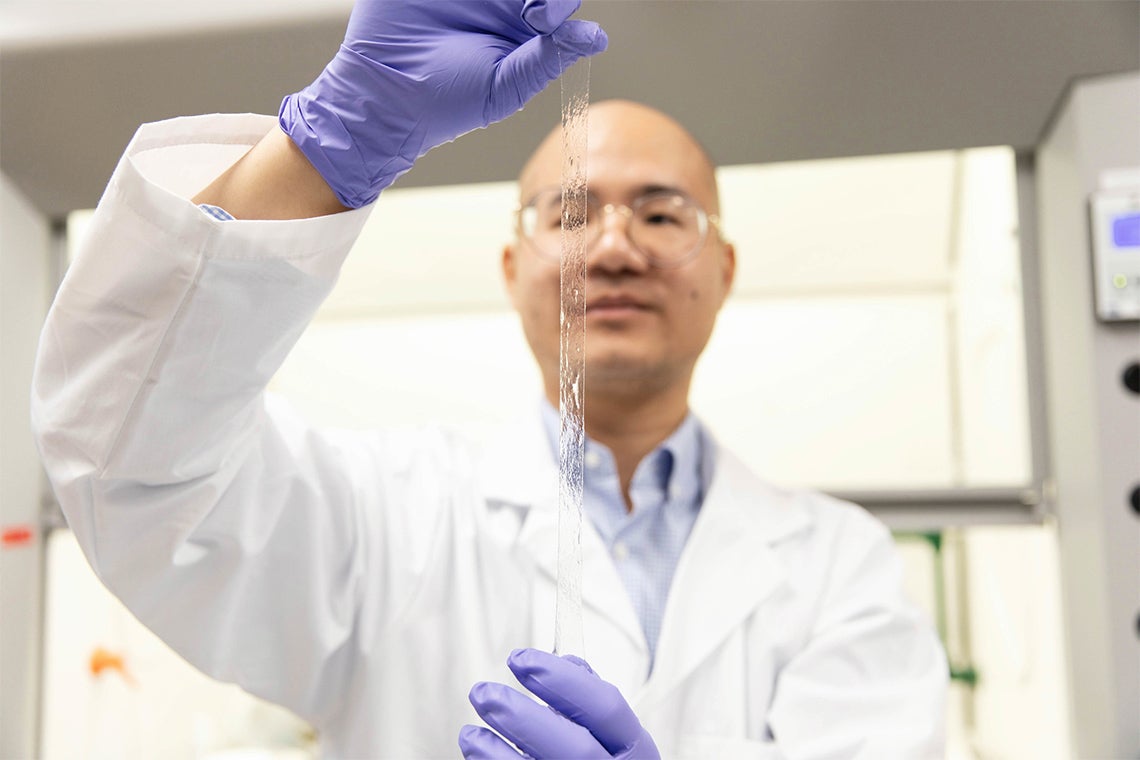 Researchers at the University of Toronto have developed a stretchy, transparent and self-powering sensor that records the complex sensations of human skin.

Dubbed artificial ionic skin, or AISkin, the researchers believe the technology could lead to advancements in wearable electronics, personal health care and robotics.

“It’s inexpensive and biocompatible – you can put it on the skin without any toxic effects. It’s also very adhesive, and it doesn’t fall off, so there are so many avenues for this material,” says Xinyu Liu, an associate professor in the department of mechanical and industrial engineering in the Faculty of Applied Science & Engineering.

The adhesive AISkin is made of two oppositely charged sheets of stretchable substances known as hydrogels. By overlaying negative and positive ions, the researchers create what they call a “sensing junction” on the gel’s surface

When the AISkin is subjected to strain, humidity or changes in temperature, it generates controlled ion movements across the sensing junction, which can be measured as electrical signals such as voltage or current.

“If you look at our skin, how we sense heat or pressure, our neural cells transmit information through ions – it’s really not so different from our artificial skin,” says Liu, whose lab is focused on the emerging areas of ionic skin and soft robotics.

“Our human skin can stretch about 50 per cent, but AISkin can stretch up to 400 per cent of its length without breaking,” says Binbin Ying, a visiting PhD candidate from McGill University who’s leading the project in Liu’s lab. The researchers recently published their findings in the journal Materials Horizons.

The new AISkin could open doors to skin-like Fitbits that measure multiple body parameters, or an adhesive touchpad you can stick onto the surface of your hand, adds Liu.

“It could work for athletes looking to measure the rigour of their training, or it could be a wearable touchpad to play games.”

It could also measure the progress of muscle rehabilitation.

“If you were to put this material on a glove of a patient rehabilitating their hand, for example, the health-care workers would be able to monitor their finger-bending movements,” says Liu.

Another application is in soft robotics – flexible bots made completely out of polymers. An example is soft robotic grippers used in factories to handle delicate objects such as light bulbs or food.

The researchers envision AISkin being integrated into soft robots to measure data on things like the temperature of food or the pressure necessary to handle brittle objects.

Over the next year, Liu’s lab will focus on further enhancing AISkin, aiming to shrink its sensors through microfabrication. They’ll also add bio-sensing capabilities to the material, allowing it to measure biomolecules in body fluids such as sweat.

“If we further advance this research, this could be something we put on like a ‘smart bandage,’” says Liu. “Wound healing requires breathability, moisture balance [and] ionic skin feels like the natural next step.”

The research was supported by the Natural Sciences and Engineering Research Council of Canada and the Canada Foundation for Innovation.