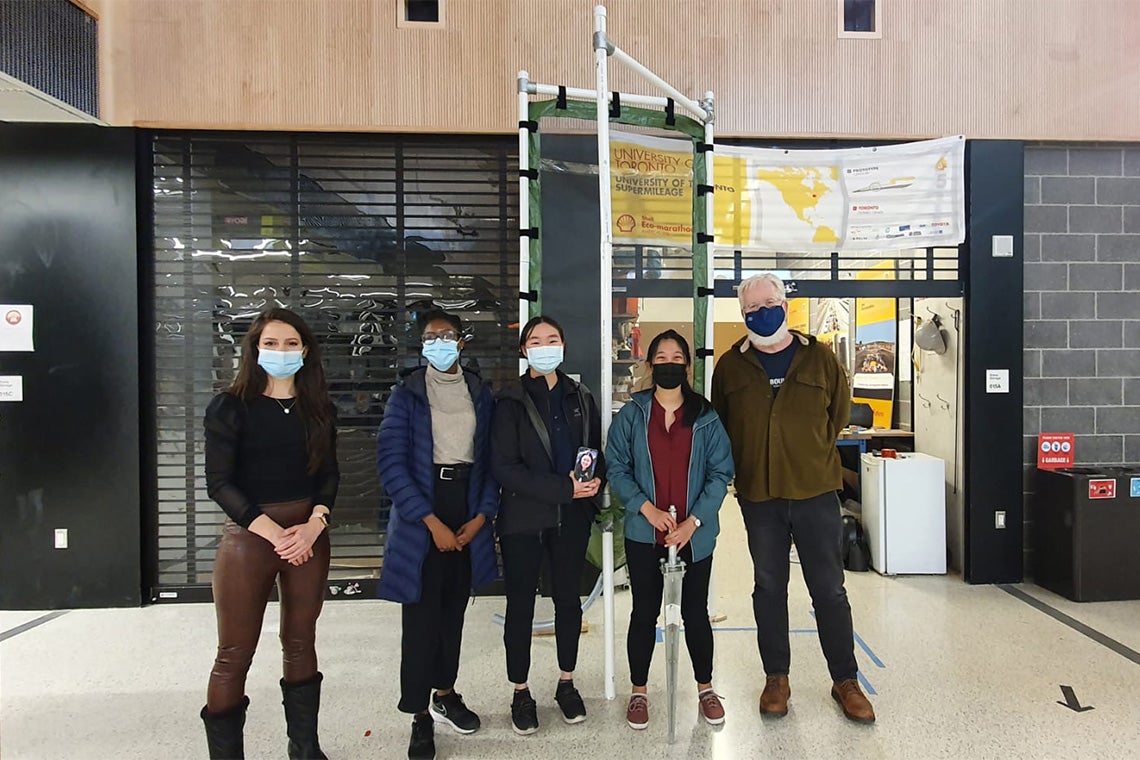 When University of Toronto alumna Eva Liu signed up for her fourth-year capstone course in the Faculty of Applied Science & Engineering, she had never heard of fog harvesting.

But after some preliminary research, she quickly found herself drawn to the potential impact drawing fresh water from the air for many countries.

“I was excited to see a capstone project where the client was an organization with humanitarian aims,” says Liu. “It was a unique opportunity to apply what we’ve learned over the last few years to a project with global and environmental reach.”

Liu and her teammates – fellow U of T Engineering alumni Alyson Wong, Valerie Ajayi and Kelly Chu – have spent the last year working on a challenge brought forward by Permalution, a cleantech startup that develops fog water harvesting technology.

Since 2018, Permalution has been working with the state of Nayarit in Mexico to leverage fog harvesting as a way of meeting the region’s unique challenges.

“Nayarit is home to a number of protected natural areas that contain many endangered species,” says Tatiana Estevez, CEO of Permalution.

“Forest fires are a big problem there. While the area is exposed to fog for 80 per cent of the year, it almost never rains. Fog harvesting can help conservationists get water to fight forest fires, but it would also be a useful source of water for the local population.”

Permalution’s existing fog harvester is built around a polypropylene mesh that collects condensation and directs it toward an irrigation point. However, the design often requires trained personnel to set it up – something that can be a challenge in Nayarit.

“The areas where we want to deploy this device are very mountainous, and often can only be reached on foot,” says Estevez.

“It’s difficult and costly to send our own staff there, and the challenge got worse due to the travel restrictions being imposed as a result of COVID-19. We wanted to make it easier for people already on the ground to set up these devices without outside help.”

The connection between Permalution and the students was facilitated through Yu Chen, a post-doctoral researcher at U of T Engineering’s Centre for Global Engineering. Chen had met Estevez years earlier when they were both working on projects related to urban development in Guadalajara, Mexico.

“When I heard about what she was doing with Permalution and the challenges she wanted to address, I knew it would make a perfect capstone project for a team of undergraduates,” says Chen.

Ajayi says that the team’s task was essentially to “IKEA-fy” the design of the fog harvester.

“Like IKEA products, we wanted a design that would be durable, easy to ship, easy to assemble and affordable,” she says. “We also wanted it to be expandable as needed.”

“The approach we decided on was to make the new design modular,” says Wong. “That means that there are standard units that can be connected to one another in any combination, so that the size of the fog catcher can be whatever size the client would like.”

Over the course of two semesters, the team tried out many different designs, with their final iteration presented in the capstone showcase at the end of the course.

“The main lesson that will stick with me is the importance of prototyping,” says Chu. “We mapped out the conceptual idea of the module for many weeks, but it wasn’t until we started actually building it that we really gained a sense of how feasible our design would be.”

That team’s prototype is now with Permalution in Sherbrooke, Que., where it is undergoing a mechanical review of the module. Estevez says the next step will be to design the module for manufacturing.

“Partnering with U of T helped us achieve a significant milestone in our product development roadmap,” says Estevez. “This project has been a great starting point toward our goal of being able to deploy more of our fog collecting solutions worldwide.”